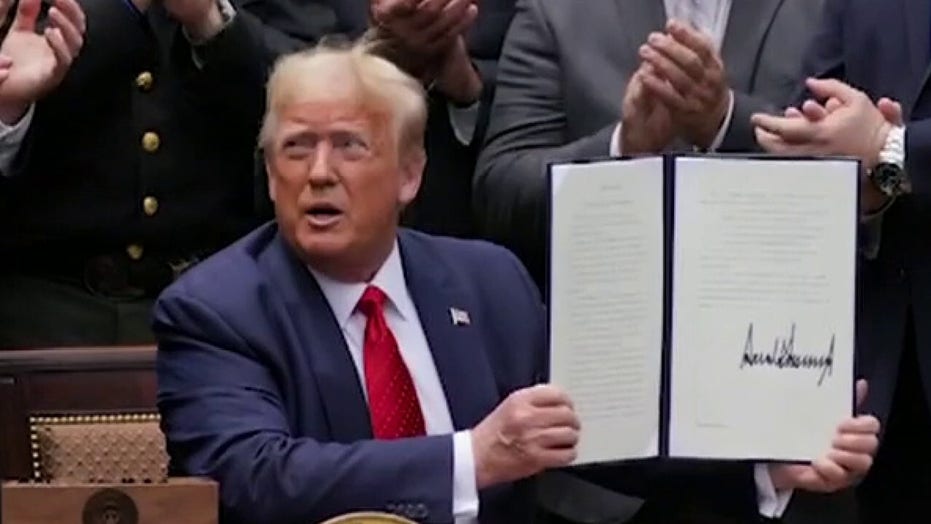 President Trump took an important first step Tuesday to address problems that exist within the law enforcement system when he signed an executive order to spur reforms “encouraging police departments nationwide to adopt the highest professional standards to serve their communities.”

As the president correctly said, the vast majority of law enforcement officers do an excellent job protecting their communities and don’t employ excessive force – much less kill people they are arresting. But he is right that a tiny minority engage in serious misconduct, and that police departments must remove such officers from their ranks.

The unfortunate recent killing of George Floyd at the hands of Minneapolis police is the exception to standard police conduct and is far from typical. Recognizing this, the president’s executive order seeks to prevent such tragedies from occurring again without harming the efforts of police to protect us from criminals.

The president’s executive order bans what have been incorrectly called “chokeholds” by police, except when an officer’s life is in danger. The term “chokehold” is misleading. The term doesn’t differentiate between tracheal windpipe compression and a carotid restraint that is taught in many martial arts academies.

These restraints are not always fatal, especially the carotid restraint. In a life-and-death struggle, such a restraint may be the only thing left for an officer to employ other than the lethal force of a firearm. So the president is right to say such maneuvers should only be used in life-threatening cases, but not banned entirely.

The executive order also requires police departments to share information about officers who have been found to have used excessive force, after complaints against them have been fully adjudicated. Law enforcement agencies will be required to report such cases to the Justice Department to receive federal grants.

This means that when officers who have engaged in misconduct in one police department apply for a job in another department, their potential new employer will be aware of their misconduct.

In addition, the president said his administration is looking at new non-lethal weapons that police can use to subdue people resisting arrest.

Within the executive order, there is also a call for the attorney general to garner the support and assistance of independent organizations that will help credential police departments to meet professional standards.

These organizations will review law enforcement agency policies concerning training on de-escalation techniques and systems. Many agencies already have this training and practice “the minimum force necessary to achieve compliance.” However, a closer review may identify some breakdowns or improvements needed in this area.

In addition, the attorney general and the Health and Human Services secretary will identify programs that will assist police departments with training and resources to better deal with individuals suffering from mental health problems, homelessness and addiction. There will also be an increase in federal funding to enable more social workers to work alongside law enforcement officers, so their efforts will complement one another.

I have written several op-eds the past few weeks concerning the issue of police and the unjustified vilification of the entire law enforcement system because of the misconduct of a few.

In my three decades in law enforcement, which started as a police officer, I have dealt with thousands of law enforcement officers at the local, state and federal levels. I do not hesitate to say that these men and women are the finest 1 percent of our population.

However, like every other occupation out there, there are some people working in law enforcement who do not uphold the values of the profession and need to be held accountable.

In the same way, we’ve all seen horrific news stories about teachers who rape students, doctors who act negligently and kill patients due to medical practice, and pedophile priests. Yet no one advocates defunding or shutting down all hospitals, all schools and all churches due to the wrongful actions by a minority of doctors, teachers and clergy members.

More than 800,000 men and women are employed in U.S. law enforcement agencies. In the wake of killings by police of unarmed African-Americans, we must redouble our efforts to address misconduct and restore trust between law enforcement officers and communities.

The president’s executive order clearly addresses the changes needed, along with additional training necessary to weed out bad cops and help officers do their jobs using only the force necessary.

Right now in the Democratic-run city of Seattle police have abandoned an entire precinct under orders from the city, and a state of anarchy exists. This kind of action is intolerable and will hurt law-abiding residents.

President Trump is with the American people on this issue. The president is demonstrating clear leadership and taking historic action to unite the country. By signing his executive order he has shown his commitment to ensuring safe communities and a fair justice system for all regardless of race, ethnicity, religion and gender.

While many on the left want to defund police, President Trump wants to ensure police have the resources and training to keep our communities safe and succeed in their dangerous mission, while treating everyone fairly.

I have said many times that President Trump has done more for law and order than any of the six presidents I have worked for – and I respect each of them because I respect that office.

This president has shown time and again that he has the backs of our brave law enforcement officers. I have seen it this firsthand when I was director of Immigration and Customs Enforcement (ICE).

President Trump understands the very dangerous job police do and he understands the ultimate sacrifice made by the 20,267 officers killed in the line of duty whose names are on the National Law Enforcement Memorial. He knows the tiny number of bad cops need to lose their jobs and – if convicted of crimes – need to be imprisoned.

Now it’s up to Congress to build upon the solid foundation of police reforms that the president has created with his executive order.