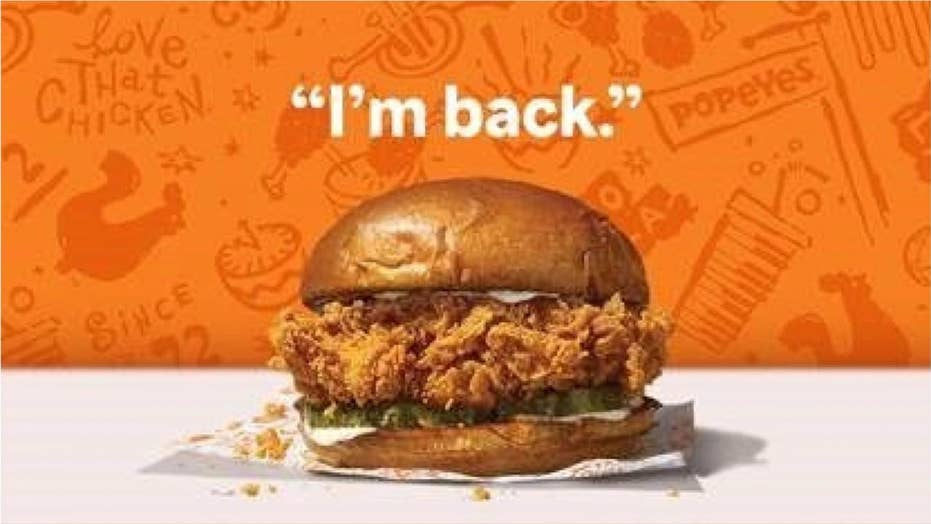 Nearly 100 years since the founding of White Castle in 1921, America’s love-hate relationship with its quintessential cuisine rages on with no signs of stopping anytime soon – especially not on Saturday, which is National Fast Food Day.

Long the foil of doctors, nutritionists and health-conscious individuals, iconic brands like McDonald’s, Burger King, Popeyes and Chick-fil-A have become ubiquitous across the American landscape.

According to the Centers for Disease Control and Prevention, 36 percent of Americans consume some form of fast food on any given day. Men are more likely to eat it for lunch than women, but more women than men eat it for a snack.

BOY'S VIRAL REACTION TO WINNING FREE CHICK-FIL-A FOR A YEAR: 'I LIKE FRIED CHICKEN!"

I grew up in a home with parents who stressed all things in moderation (even if we didn’t always listen).

We’re drawn to excess like moths to light, but when it comes to our health, only a fool would think you could get away with dining at the Golden Arches morning, noon and night.

So while we didn’t make fast food a staple in the Batura household, it was still considered a treat.

Every few months, we’d eat out at Roy Rogers, a fast-food restaurant with a Western theme. I can remember standing in line with my dad, leaning against the wooden fence posts that served to corral waiting guests. I used to love their “Double R Bar” burgers – a juicy beef patty topped with thinly sliced deli ham and cheese.

Can you get any more American than a burger consisting of two different types of meat?

Nathan’s Famous was another special excursion, a place we sometimes stopped at on the way home from the town pool in Oceanside on Long Island.

Having grown up in Brooklyn near Nathan's original Coney Island location, I’m sure my dad found it enticingly familiar. A huge pavilion with picnic tables, the aromatic scent of hot dogs and fries was heaven on Earth to me.

It was at Nathan’s that I encountered real poverty for the first time. Spotting an unkempt man mixing hot water and ketchup, I asked my mother what he was doing. She shared that he was likely poor and trying to make tomato soup. I think she offered to buy him a meal.

White Castle became a favorite destination in high school and college. Students like myself with meager budgets could eat there like a king for only a few dollars. Our favorite gym teacher, Mr. Russ, insisted they put sawdust in the “belly bomber” burgers – but we just laughed. It was tasty and cheap, and we competed to see who could eat the most.

Too much of anything is almost never a good thing, but despite all the health warnings, I still like fast food from time to time – and so do plenty of other people.

When I see the Golden Arches today, I’m reminded of sitting with my dad there on special Saturday afternoons, hoping to somehow see Ronald McDonald in person. Burger King conjures up memories of hanging out with friends after high school football practice. Friendly’s was ice cream with my grandmother.

A lot of us are drawn to this type of comfort food for reasons beyond convenience. Billboards and neon signs advertising McDonald’s, Burger King, KFC, Arby’s, Wendy’s, Popeyes, Taco Bell, Whataburger, Chick-fil-A, In-N-Out Burger and a host of other classic fast-food haunts elicit good memories of days gone by – often of times with people who are no longer with us.

When I see the Golden Arches today, I’m reminded of sitting with my dad there on special Saturday afternoons, hoping to somehow see Ronald McDonald in person. Burger King conjures up memories of hanging out with friends after high school football practice. Friendly’s was ice cream with my grandmother.

Today, I often take my boys for special one-on-one breakfasts to Chick-fil-A. Maybe someday they’ll think of me when they see the red-and-white sign – but I suspect they’ll first crave the special sauces they love as much as the food itself.

Food – fast or slow – has a wonderful way of bringing people together, often on vacations, special occasions – or a seemingly ordinary day that for some reason we’ll remember forever.

There’s an old Finnish proverb that suggests happiness is a place between too little and too much – wisdom that seems apropos when navigating the plethora of American fast food choices.

So go ahead and live a little at your favorite burger or chicken joint. But as my mom used to say, remember that just enough is often as good as a feast.