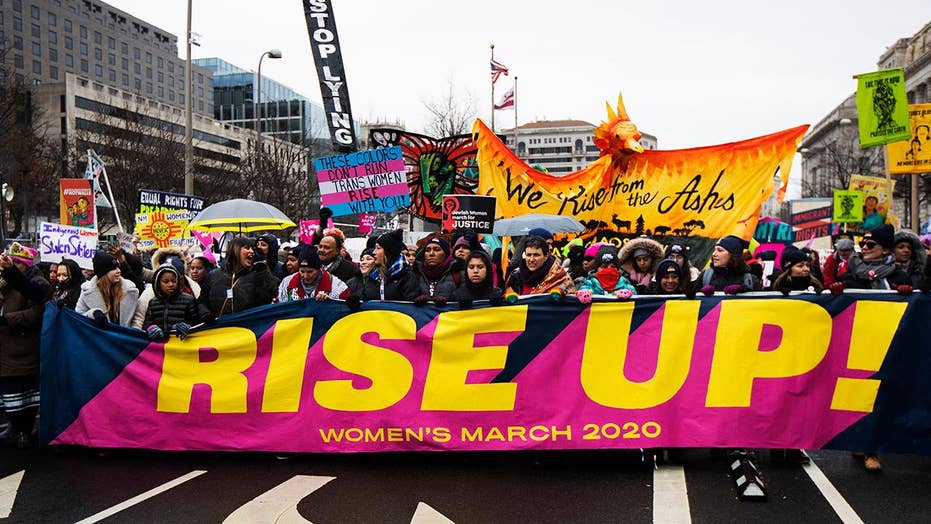 Thousands gathered in more than 180 cities around the globe.

The fourth annual Women’s March kicked off Saturday in Washington, with sister marches in taking place in cities around the country. As a working mother, I’ve been studying the organization behind the marches to see if it has any ideas to help women.

To their detriment, leaders of the Women’s March continue to prioritize resistance to President Trump, while ignoring big everyday concerns of many women, such as how to afford time off for a new baby.

Now is the time to support all women rather than to oppose one man. Too bad that the Women’s March organizers have yet to learn that.

NATIONAL ARCHIVES APOLOGIZES FOR BLURRING ANTI-TRUMP SIGNS IN WOMEN'S MARCH PHOTO: 'WE MADE A MISTAKE'

Three years into the Trump administration, life for women has improved by many measures. The unemployment rate for women is at a 60-year low. Some 95 percent of the job gains last month went to women and women now outpace men on U.S. payrolls for only the second time in history.

Median household income hit a record-high in 2018. Meanwhile, from 2017 to 2018, 1.4 million Americans left poverty. Households led by single mothers experienced the biggest gains as their poverty rate fell to the lowest rate on record. Women added 1,821 net new businesses per day between 2017 and 2018.

Certainly, there is more to work to do to make health care affordable for families, expand flexible work arrangements, reduce housing costs, and ensure that our communities are safer. But these issues are absent from the Women’s March agenda, which has just three focuses: reproductive rights, climate and immigration.

From its inception, the Women’s March has made fighting for abortion the cornerstone of its campaign, to the exclusion of women who hold different views.

Women are not a monolith. We do not all vote the same or hold the same views on every issue, nor are we defined by one issue.

Women have broader concerns and are looking for bipartisan solutions that deliver more freedom and better options for our work, family and communities. The good news is that others are filling that space and offering positive solutions for women.

We often hear alarming headlines about the lack of paid parental leave in the United States because we lack a federal paid leave plan. That’s not an accurate picture. Most workers already have access to some paid time off according to the Bureau of Labor Statistics.

And as the labor market has tightened because of the improving economy, we have seen big and small employers expand their paid leave benefits to low- and middle-income workers. That’s a win for workers and underscores that there is a business case for offering this benefit to moms and dads.

This is personal for me. My husband and I will welcome our second child to our family this May. Some of my concerns this time around are the same as when I delivered our first child one year ago. I still think about being able to afford to take time off and the transition back to working full-time.

My husband and I will once again figure out a plan for me to take time off that works for us and then settle on a child care plan for after I return to work.

Parental leave and affordable child care are issues that matter to many women. There are many women whose employers do not or cannot afford to provide paid time off to welcome a new baby. These tend to be women with lower incomes in less-skilled positions, some of whom turn to public assistance.

How to help those workers? The answer cannot be a government-run paid leave benefit funded by taxpayers, like the Family and Medical Insurance Leave Act. The Democrats’ FAMILY Act would displace the private paid leave and flexible work arrangements that exist today and would discourage job creation. It would force all workers to pay a new payroll tax, regardless of whether they want these benefits.

Policymakers on the right and left are coming together to offer a variety of paid parental leave proposals that are voluntarily self-funded and customizable – rather than top-down mandates that do not fit the needs of women.

One bipartisan proposal would give new parents the option to take an advance on their child tax credit. Others suggest allowing new parents to access future Social Security benefits and delaying eligibility for Social Security retirement benefits. These proposals and many others are explained in the Independent Women’s Forum’s new “Working for Women” report.

These are the kinds of ideas that all women can rally around. Women want proposals that create more opportunities and greater flexibility so that we can pursue our own visions of happiness.

The Women’s March can hold onto its singular anti-Trump focus, but women will just walk away.

Patrice Lee Onwuka is a senior policy analyst at the Independent Women's Forum and adjunct senior fellow at The Philanthropy Roundtable.