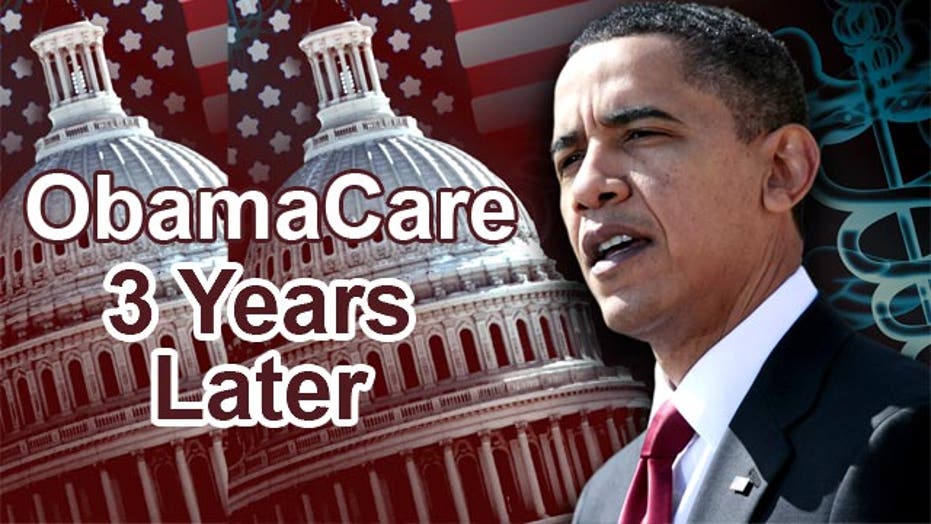 What have we learned three years into ObamaCare?

Saturday marks ObamaCare’s third anniversary, and President Obama and Democrats across the country will surely celebrate its greatest achievement to date: survival.  The health care law narrowly survived a Supreme Court challenge, repeated attempts by House Republicans to repeal it and, with President Obama’s reelection, seems to be set for implementation next year.

But survival is a pretty low bar for the law, and far from the lofty claims made on its behalf.

In 2009, President Obama said that “it’s important for us to make sure that 46 million people who don’t have health insurance get it.  And I think it’s important for us to bend the curve, separate and apart from coverage issues, just because the system we have right now is unsustainable and hugely inefficient and uncompetitive.”

The Obama administration’s claim that the law would rein in spending undoubtedly persuaded wavering Congressional Democrats to push it across the finish line.

In a new report from the Manhattan Institute, Rhetoric and Reality, my colleague Yevgeniy Feyman and I try to summarize the best evidence to date on the impact that the law is having on health care costs today – and whether or not it is likely to contain costs in the future.

Based on the best currently available data, we project that ObamaCare will increase, not decrease, U.S. health care spending.

Certainly, the near term trends aren’t favorable for the law.  Since the passage of the law, household premiums for private insurance have increased by 11.3 percent, outpacing even the growth of medical inflation (6.8 percent). Last year, Congressional analysts also projected that employer-based family coverage will cost $20,000 by 2016, an increase of 27 percent over 2012 rates.  Looking a little further ahead, premiums are expected to rise steadily through 2021, except for a brief dip in 2014.

(The “dip” kicks in when ObamaCare’s exchange subsidies begin, transferring costs from individuals and families to taxpayers.  But shifting costs is not the same thing as containing costs.)

In fact, a recent survey of insurance companies by the American Action Forum, a think tank, found that market reforms included in ObamaCare will spike health insurance premiums, particularly for younger and healthier people.  ObamaCare requires insurers to sell richer benefit packages, but the main cost increases come from new rules like rating bands, that limit the discounts insurers can offer to younger policyholders compared to older ones, and prohibit premium variations based on gender and health status.

ObamaCare also includes new taxes on everything from insurance companies to prescription drugs, costs likely to be passed along to families and small businesses shopping for coverage.

ObamaCare didn’t invent America’s health care woes, and shouldn’t be blamed for the ones we already have. The U.S. already spends over $2 trillion on health care, approaching 18 percent of U.S. GDP.  And health care costs were rising much faster than income or GDP growth for decades before ObamaCare came along.

But the point of the law was to fix the system – not add to its burdens.  The Centers for Medicare and Medicaid Services (CMS) predicts that the law will add about $500 billion to U.S. spending between 2012 and 2021.

To be fair, ObamaCare does contain several small pilot projects, all of them well meaning, designed to reform the supply or delivery of health care.  But existing pilot programs thus far have had mixed or disappointing results.  And some projects, like the widespread implementation of electronic health records, seem to have increased costs in some cases, by making it easier for providers to bill for additional services.

Other experiments, like Medicare’s Accountable Care Organization (ACO) program, may also be cost increasing, by encouraging hospital consolidation that allows them to increase prices.

One area where ObamaCare devotes far too little attention is reforming the demand for health care services.  For all of our talk about the crushing cost of American health care, on average, consumers only spend about 11 cents out of pocket for health care – the fifth lowest average among OECD countries.  And research suggests that when out of pocket spending is lower, health care spending increases because consumers are only paying a tiny fraction of the total bill.

By 2021, ObamaCare will push U.S. out of pocket spending even lower than it is today, to just over 9 percent. This may accelerate price increases by insulating the newly insured largely from the costs of the care they consume.

Defenders of the law like to point out that CBO scores the law as reducing the deficit. But this is only because the law brings in more revenues (through taxes and penalties) than it spends over a ten year period. And recently, health care cost growth has slowed somewhat. But there is no reason to attribute the slowdown to ObamaCare, since its main provisions haven’t even kicked in.  And lower Medicare spending is largely (75 percent) attributable to lower drug spending in Medicare’s Part D benefit, which started in 2006.

On net, we found evidence that ObamaCare will do very little to slow U.S. health care spending, and may actually increase it.

While the Congressional debate has focused on repealing ObamaCare, a more politically palatable option may be reforming it by focusing on demand side reforms – like moving most non-poor Americans into higher deductible health plans paired with savings accounts and lowering subsidies on the exchanges (currently subsidies extend to families making up to $94,000 annually) to focus on low-income families, and building effective systems that allow consumers to easily compare the price and quality of health care options.

An anniversary is supposed to be the time for celebration. For ObamaCare, its third anniversary signifies how little the law has accomplished, and the enormous health care challenges still facing the country.