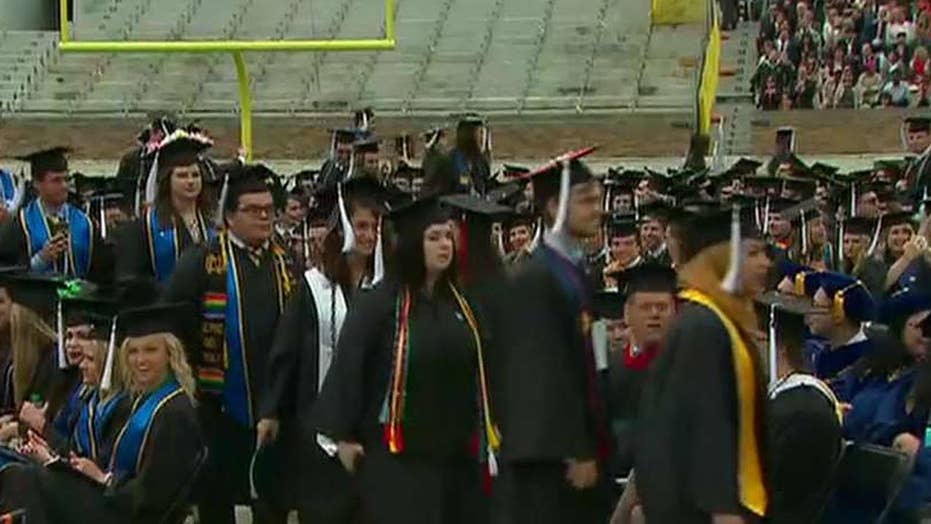 Since when have we become a nation where you run away from hearing a point of view you disagree with?

Just this past weekend, dozens of students and family members attending the commencement ceremony at Notre Dame University found the mere presence of Vice President Mike Pence as the featured speaker so objectionable that they stormed out. They booed, hissed, and then formed their own make-shift graduation ceremony outside of the official university-sanctioned event.

Why did this happen? What exactly triggered supposedly well-educated college students from one of the best schools in the world to be so intolerant of the Vice President?

Maybe my recent experiences will offer some insight:

Over the past couple of years our organization, Turning Point USA, has grown from a small student organization – focused on the promotion of the ideas of fiscal responsibility, free markets and limited government – to a powerhouse with more than 100 paid field staff at over 1,100 college and high schools across the country.

One of the most horrifying and surprising evolutions we have witnessed among our widespread campus network is the rapid movement away from tolerating opposing ideas and respectful debate to the deployment of obscene bully tactics from the left. At first, we dismissed the shouting down of speakers, the silencing of conservative groups, and the suppression of conservative professors as just being isolated to the most liberal universities.

This is a widespread epidemic that has metastasized to nearly every corner of academia. Colleges all over the country contribute to this egregious and intolerant behavior, shutting down conservatives on campuses from Florida to Illinois, Alabama to New York – even Texas.

But the question people ask me all the time is, “why?” Why are liberals trying to silence conservatives? What is so threatening about pro-capitalism, pro-Constitution ideas?

Put simply, academia can't seem to fathom the idea that anyone outside of their perfectly created bubble might think differently than they do. Instead of equipping my generation with facts and arguments to better articulate their beliefs, they train them to be disruptive protestors, shouting down ideas that don't fall in line with their own.

How many conservative students booed, protested, demonstrated, and walked out when President Obama gave his numerous commencement addresses? Interestingly enough, the people who are contributing to the silencing of speech on college campuses are typically the same people who preach "acceptance" and "tolerance."

To my generation, I must ask: If conservative ideas were that bad, wouldn't you just let them die on their own?

If conservative ideas were as terrible as you say, why would anyone want to show up to see Vice President Pence or President Donald Trump on campus in the first place?

My generation needs to come to grips with the fact that there are other ideas out there. If you believe in something, you need to have the courage to fight for those ideas – not run away from them or try and silence them.

Put simply, my generation needs to grow up.