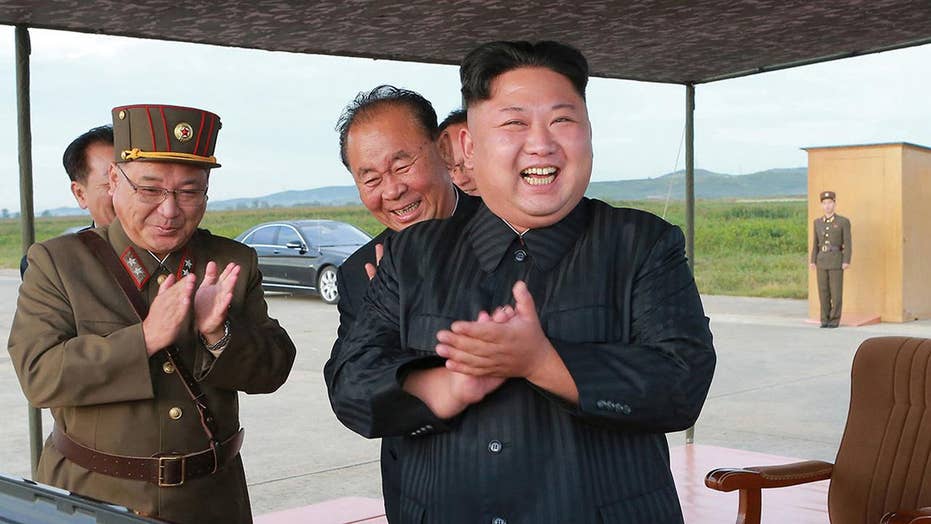 What can the US do to contain North Korea?

U.N. sanctions against commerce with North Korea are proving toothless. In the last few days we have learned via open sourced U.S. and Western intelligence that both China and Russia are selling oil and petro chemicals to North Korea. The sales are in violation of U.N. Security Council sanctions.  The sales permit continued development of the rogue nation’s nuclear weapons program.

Existing U.N. sanctions simply stop the Kim regime sourcing oil on the open market. The U.S. can publically castigate countries like Russia and China for violating the sanctions, to no effect.  Even with concrete proof the White House could do little, given we are dealing with a feckless U.N.

Publically, there is no “smoking gun” tying the governments of China and Russia directly to the illegal oil sales.  In practical terms, it is unlikely that state level smuggling, worth tens of millions of dollars would go unnoticed or unsanctioned by two centrally controlled regimes.

It is more likely the Chinese and Russian governments are complicit in the illicit oil sales.  The two governments, both longtime backers of Kim Jong Un, are relying on plausible deniability.  The oil transfers are made, ship transponders off, on the open sea, outside the territorial waters of China or Russia. One can almost hear 1960’s television’s Sargent Schultz refrain, “I know nothing.”

So, what options does the White House have?  Despite U.N. sanctions and international condemnation, the oil and money continues to flow into North Korea. Kim Jung Un has continued to develop nuclear weapons capable of reaching the United States and our Pacific allies.  The Trump Administration seemingly has two potential responses, both bad. Option one is in latter stages of planning and development, namely; direct kinetic military action.  Option two is learn to live with a nuclear-armed despotic regime.

Like sanctions, blockades are designed to slowly choke the recalcitrant nation to submission.

A third middle option with significant historical precedent exists - a physical naval blockade of North Korea.  Short of a naval blockade, where every ship in the vicinity of North Korea is boarded, searched, and if necessary impounded, it will be impossible to entirely close the oil lifeline spigot.

Like sanctions, blockades are designed to slowly choke the recalcitrant nation to submission.  Unlike sanctions, a blockade provides the capability to monitor, intercept and enforce restrictions on what can go in and out of the target nation while providing a powerful psychological and diplomatic instrument.  A naval blockade in the Sea of Japan and the Yellow Sea would prevent North Korea from obtaining essential raw materials and equipment, including refined petroleum and military spare parts. A naval blockade also serves to choke export income, in this case the lucrative coal and iron exports the regime needs to quite literally keep the lights on.

The United States need not act unilaterally and carry the entire weight of a blockade of North Korea.  U.S. allies in the region would support the initiative. Key players in this effort would be Japan and Australia, with support likely from Singapore, South Korea, India, Taiwan and potentially NATO forces.

The Japanese Maritime Self-Defense Force, (JMSDF) boasts the fifth most powerful navy in the world with one of the largest economic exclusion zones to patrol. Their destroyers and frigates are modern and equipped with the Aegis combat system.

Australia, another island nation in the Pacific, is the only country to have supported the United States in every military conflict since World War One. The RAN is built for coastal operations, with shallow water diesel-electric submarines, helicopter landing ships, frigates, and the Armidale class patrol boat, one of the most effective littoral combat platforms in the world. I served with the RAN during the early 2000’s blockade of illegal alien vessels.  It proved a tremendously effective “reverse blockade” of the Australian coast.

The naval blockade is not a new concept, and historically has enjoyed significant success. From the British Royal Navy blockade of the First French Empire during the Napoleonic war to the 1962 U.S. blockade of Cuba, which effectively ended Soviet attempts to establish missile bases on the Caribbean island, blockades have proven effective.  Short of direct military action, a multi-national naval blockade of North Korea is not only palatable; it may be the only alternative.

Greg Keeley is a retired lieutenant commander with service in both the U.S. and Australian navies. He is a veteran of Iraq, Afghanistan, and Pacific. He has also worked as an adviser to members of the U.S. House of Representatives.