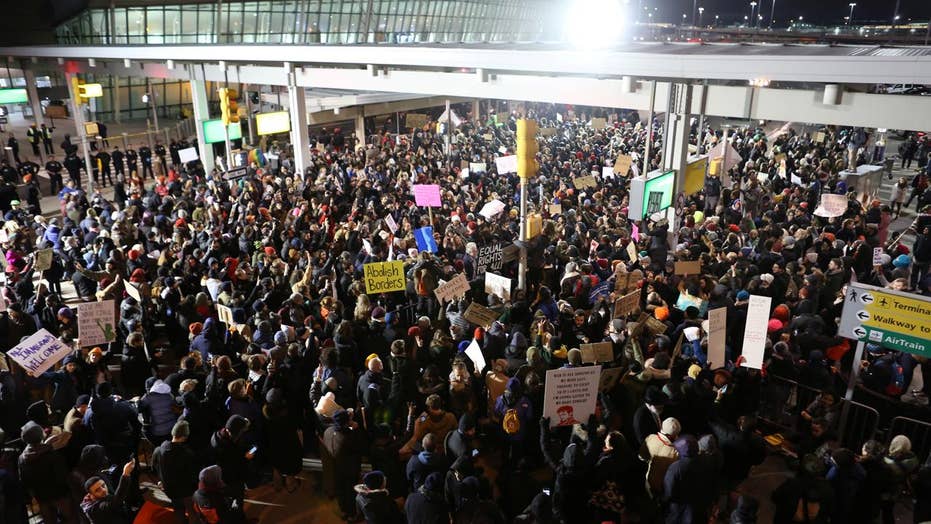 Do you lock your front door at night? Hater!

Do you have an alarm system at your house? Xenophobe!

Do you ask who’s ringing your doorbell before letting a visitor in? Rotten bigot!

That, essentially, is the reaction from the politically charged left to President Trump’s executive order about admitting people from certain countries into the United States. The unhinged outrage from Trump-haters – and there are a lot of them – puts the interests of non-Americans over the security of our citizens. And the administration’s botched roll-out of the new restrictions gave opponents just the excuse they needed to bellow.

Reduce the argument to a personal level. A homeowner is permitted to refuse entry to anyone he or she doesn’t want in, right? Security systems are intended to keep unwanted visitors out and let the homeowner know who is outside. Lots of apartment dwellers have an intercom that rings when someone outside wants to visit. Are those precautions divisive, discriminatory or unconstitutional?

One of the most horrifying placards I saw during the protests on Trump’s inauguration day read: “No borders. No nations.” Really? Let anyone go anywhere without asking who they are, why they want to come here and what their past actions tell us about them? The notion that America must be open to anyone who decides to visit flies in the face of 21st century reality.

How do other countries vet visitors? China requires potential guests to fill out a four-page application that asks, among other things, the reason for your visit, the names of your close relatives and what they do, the person who will pay for your trip, your passport number, how long you plan to stay and if you have ever been denied a visa for China in the past? How would the protesters outside American airports react to that kind of quizzing? China doesn't bother with pretending a democracy, so protests are few and far between.

Iran, another country that likes to know who’s coming across its borders, asks most of the same questions as China, as well as “Have you ever been infected by any contagious diseases?” and who you plan to meet with in Iran.

Saudi Arabia gets right to the point, telling female travelers that they cannot enter the country without a male relative accompanying them. Yet Saudi airports have no one outside screeching about their rights.

And a handful of Muslim-majority countries won’t admit anyone who has an Israeli visa in his or her passport.

The United States allows a great deal of leeway for protest and disagreement. Those who disagree with the president’s executive order have taken full advantage of those rights, and rightly so. But their argument that the United States, alone among all countries, cannot restrict who comes in from beyond its shores is, quite simply, specious.

The protests against anything this president does will continue, and that’s fine as long as they’re peaceful. But let’s at least admit that they are not about the issues, but the issuer-in-chief.