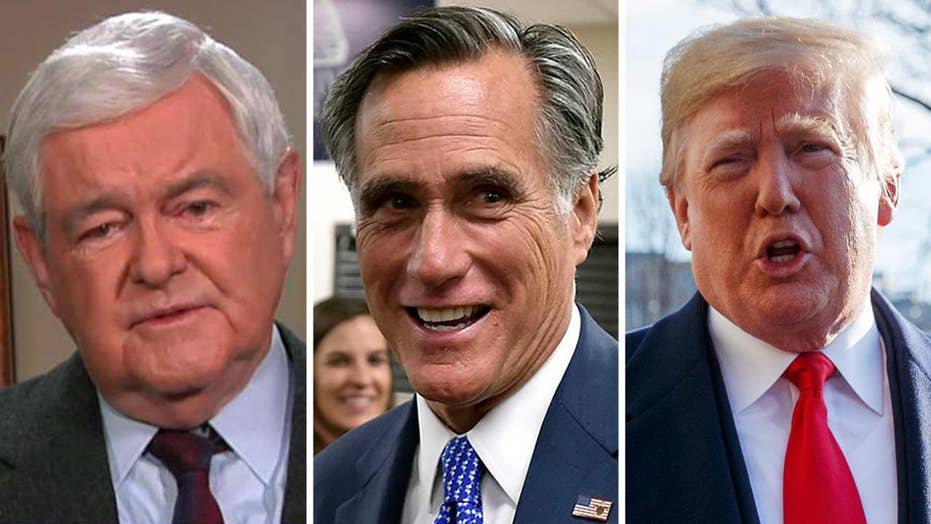 Newt Gingrich to Mitt Romney after his attack on President Trump: The Senate doesn't care who you used to be

As reporters, editors, and producers in the mainstream media seek to lionize former Massachusetts Governor and incoming Utah Senator Mitt Romney for his recent Washington Post op-ed criticizing President Trump, they should consider this critical set of numbers: 72-9.

These figures represent the margin by which President Trump would beat Mitt Romney in a four-way 2020 Republican Primary if it were held today, according to a December McLaughlin & Associates survey. I’ve been studying politics for a long time, and 72-9 is fairly decisive.

I faced Romney in the 2012 primary, and he won. He is a smart, competitive, serious man who genuinely wants America to succeed. This is why I am so puzzled by his decision to start the year attacking the president – before even being sworn into the Senate or given committee assignments.

CLICK HERE TO READ NEWT GINGRICH: 2019 WILL BE A WILD RIDE — THESE PAST EVENTS PROVE IT

Romney has no doubt had a successful career (in politics and business). However, I suspect he will soon learn that regardless of his past achievements, he is now a freshman senator – and the Senate doesn’t care who you used to be.

Most immediately, he should be learning how to operate in the Senate. It is a complicated, arcane body that can take decades to understand. Romney should reach out to Senators like Lamar Alexander, Susan Collins, and Lindsey Graham, to learn how to move the system and make it work.

I can’t figure out why Romney thought ribbing the president was strategically more useful than offering ideas to solve the problem at the border and get the government fully-funded. In fact, Romney and every other Republican should join Senator Graham in talking to Americans everywhere about the plan to secure the border while protecting the Dreamers.

Instead of picking a fight with his own party’s president, Romney should be asking why the Democrats apparently care more about hating President Trump than they do about helping nearly 700,000 people who were brought to our country as children and have lived as Americans their entire lives.

Additionally, Romney could be offering Republicans insight into defeating Senator Elizabeth Warren’s presidential candidacy – since she represents the state he once governed.

Instead of starting his Senate service by seeking to lead a small, shrinking anti-Trump faction of congressional Republicans, I hope Romney takes advantage of his very real chance to help our country – and the Republican party at the same time.

More than perhaps any other person in Congress, Romney could become a very effective bridge between the White House and business leaders. If he spends his time focusing on policy objectives instead of noise, he could make a serious impact on our future.

However, if he allows his political staff to turn him into the premier anti-Trump senator, he will severely limit his effectiveness and potentially endanger the Senate majority and Republican agenda.

I hope Senator Romney gets beyond the noise and learns to find common ground for the common good.