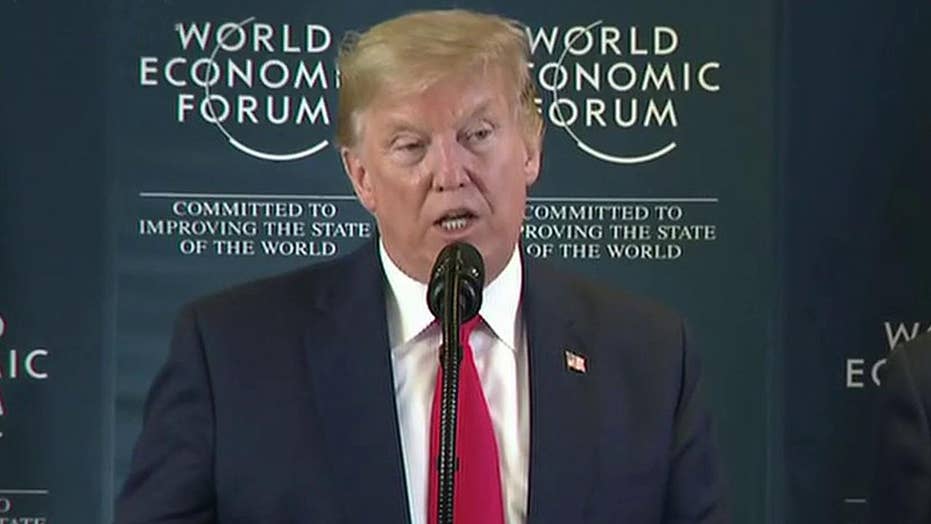 President Trump’s visit to the World Economic Forum in Davos, Switzerland this week was a bigger triumph than anyone could possibly have imagined a year ago.

First, the counter-staging of President Trump landing at Davos while the Senate began the trial over his phony impeachment was a Reagan-quality move.

Television is 80 percent visual. People standing around in the Senate make for boring television. Even people paid to watch the proceedings have complained about how boring they are.

On the other hand, Air Force One landing in Switzerland – and then Marine One flying into Davos – makes for great visuals. Furthermore, the Senate dialogue of the Trump haters versus the Trump supporters shrinks in comparison to a picture of President Trump stalking across the snowy town to deliver a major speech to the world’s economic leaders.

Second, the story the president brought to Davos was an extraordinary contrast to the problems of his colleagues around the world.

The strength of the American economy, the remarkably low unemployment rate, and the job-creating achievements among the African-American and Latino communities represent a dramatic challenge to the leaders of countries with massive unemployment and underemployment.

The lessons of lower taxes and reduced regulations are hard for most of the countries around the world to learn. This just further separates the American economy from its competitors.

Third, once again President Trump gave an important, principled speech that was worthy of the leader of the biggest economy and most powerful military in the world.

Critics will claim the president was simply bragging, but it is worth reading both Trump’s 2018 and 2020 Davos speeches to see how he is explaining the principles behind our economic strength to other leaders – so they might follow the same path to prosperity.

Trump started by reminding people of the Obama administration’s economic failures, noting that almost 200,000 manufacturing jobs had been lost, wages had been flat, and more than 10 million more people were on the welfare rolls under President Barack Obama.

Trump also reminded the audience that the so-called experts had predicted a dire U.S. economy for the foreseeable future.

Then, Trump explained his own optimism – and the results:

“Yet despite all of the cynics, I had never been more confident in America’s future,” Trump said. “I knew we were on the verge of a profound economic resurgence, if we did things right – one that would generate a historic wave of investment, wage growth and job creation.”

Trump added: “I knew that if we unleashed the potential of our people, if we cut taxes, slashed regulations – and we did that at a level that’s never been done before in the history of our country, in a short period of time fixed broken trade deals and fully tapped American energy – that prosperity would come thundering back at a record speed. And that is exactly what we did, and that is exactly what happened.”

The list of achievements that President Trump then rattled off is significant. I’ll paraphrase briefly here:

Specifically, the unemployment rate for women is the lowest it’s been since 1953, and women now make up the majority of the workforce.

Veteran unemployment is also at a record low. As the president said: “We are lifting up Americans of every race, color, religion and creed.”

At the same time, the wage gap is moving in the right direction. Trump said that “workers’ wages are now growing faster than management wages.  Earnings growth for the bottom 10 percent is outpacing the top 10 percent – something that has not happened. Paychecks for high school graduates are rising faster than for college graduates.”

Finally, the president pointed out that more than 2 million millennials have joined the workforce (which supposed experts also said was unlikely).

President Trump brilliantly summarized the contrast between America before he arrived and America today.

Beyond jobs, the president also made the point that the stock market has jumped by 50 percent since he took office, “adding more than $19 trillion to household wealth, and boosting 401(k)s, pensions, and college savings accounts for millions of hardworking families.”

The media constantly try to paint the Trump White House as disorganized or divisive. However, the numbers don’t lie. President Trump’s new model has been entirely intentional and applies to everyone.

“America’s newfound prosperity is undeniable, unprecedented, and unmatched anywhere in the world,” Trump said. “America achieved this stunning turnaround not by making minor changes to a handful of policies, but by adopting a whole new approach centered entirely on the wellbeing of the American worker.”

“Every decision we make – on taxes, trade, regulation, energy, immigration, education, and more – is focused on improving the lives of everyday Americans,” the president added. “We are determined to create the highest standard of living that anyone can imagine, and right now, that’s what we’re doing for our workers. The highest in the world.  And we’re determined to ensure that the working and middle class reap the largest gains.”

President Trump took this great record and turned it into a sales pitch for the CEOs at Davos to come and invest in America. Importantly, he made sure the TV cameras caught him advocating for jobs for Americans while the Democrats attacked him in the Senate.

It was a remarkable tour de force and a triumph for the president, which further made the Democratic House look petty and out-of-touch with reality.