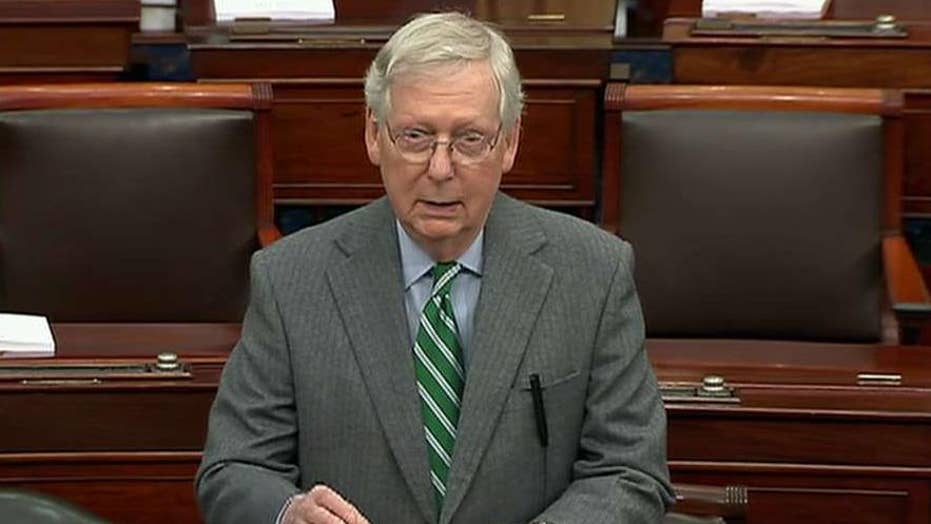 House Speaker Nancy Pelosi, D-Calif., seemed giddy Wednesday as she announced the impeachment managers who would go to the Senate and attempt to prosecute a case against President Trump.

“He’s been impeached forever,” Pelosi said. “They can never erase that.”

However, Pelosi has it exactly backward. The Senate is going to refuse to convict President Trump. He will be exonerated, and she and the Democrats will be condemned by history.

The wide repudiation of the House Democratic betrayal of the Constitution is already beginning. As a historian myself, I think it’s important to document these reactions.

This is hardly an endorsement of Pelosi’s trivialization of the Constitution.

[Charles] Pinckney and [Rufus] King might have been right in 1787. Americans prefer to choose their presidents with elections, and whenever impeachment is used in an attempt to nullify those choices, the results aren’t happy for anyone. That was true in 1868, and as both Andrew Johnson and his accusers might warn us, it remains true after a century and a half.”

Clearly, Pelosi did not know enough history to understand the warnings of Pinckney and King – or the sad end of the impeachment process against President Johnson.

When he was interviewed by Arun Rath, Harvard law professor and ACLU liberal Alan Dershowitz commented:

“One can oppose President Trump’s policies or actions but still conclude that the current legal case for impeachment is not just woefully inadequate, but in some respects, dangerous, as the basis for the impeachment of an American president.”

So, from these perspectives, it is Pelosi – not Trump – who threatens to undermine the Constitution.

As former federal prosecutor Andy McCarthy pointed out on Fox News, the Pelosi strategy is simply to “bruise President Trump with an unending stream of new impeachment allegations” in order to hurt his chances at reelection. McCarthy added that “after over 230 years, we have entered the era of partisan impeachment that the Framers feared. This is what it looks like.”

So McCarthy sees Pelosi behaving in exactly the unconstitutional and narrowly partisan manner the writers of the Constitution hoped to avoid. Again, it is Pelosi – not Trump – who is undermining the Constitution.

In addition, The New York Post’s editorial board noted that “Intelligence Chairman Adam Schiff has been lying to the world for years in his nonstop campaign to smear President Trump.” Their judgment is that it is Schiff, D-Calif., – and not Trump – who has been a continuous serial liar.

The Wall Street Journal’s editorial board summarized the disaster of Pelosi’s bid to delay sending the articles of impeachment to the Senate, saying her move “further exposes how Democrats have defined impeachment down. The House hearings blocked GOP witnesses and limited cross-examination. Despite selective leaks and a pro-impeachment media, they failed to move public opinion or persuade Republicans that Mr. Trump committed impeachable offenses.”

The Wall Street Journal editorial board went on to call Democrats’ actions “an abuse of the impeachment power” and reiterated that the things alleged in the articles of impeachment “aren’t close to impeachable.”

Madison Gesiotto in The Hill called this “the flimsiest and most partisan impeachment in history.”

In fact, as Pelosi played games with appointing impeachment managers, even senior Democrats began to lose patience. “The longer it goes on the less urgent it becomes,” Democratic Sen. Dianne Feinstein of California told reporters. “If it is serious and urgent, send them over. If it is not, do not send it over.”

Republican Sen. Susan Collins of Maine suggested that the delays were wrong. As she put it, “doesn’t that suggest that the House did an incomplete job, then?”

McConnell went on to remind the country of the Founding Fathers’ fears of exactly the kind of narrow bitter partisanship Pelosi has been displaying.

Paraphrasing Alexander Hamilton, McConnell warned that “blinded by factionalism, the House of Representatives would abuse the power of impeachment to serve nakedly partisan goals rather than the long-term interests of the American people and their Republic.”

Finally, it’s clear the House Democrats have failed utterly to live up to the standard of prosecution set out by former Associate Supreme Court Justice Robert H. Jackson (who served as chief prosecutor of the Nuremberg trials). Jackson cautioned the Conference of United States Attorneys on April 1, 1940:

“With the law books filled with a great assortment of crimes, a prosecutor stands a fair chance of finding at least a technical violation of some act on the part of almost anyone. In such a case, it is not a question of discovering the commission of a crime and then looking for the man who has committed it, it is a question of picking the man and then searching the law books, or putting investigators to work, to pin some offense on him. It is in this realm in which the prosecutor picks some person whom he dislikes or desires to embarrass or selects some group of unpopular persons and then looks for an offense, that the greatest danger of abuse of prosecuting power lies. It is here that law enforcement becomes personal, and the real crime becomes that of being unpopular with the predominant or governing group, being attached to the wrong political views, or being personally obnoxious to or in the way of the prosecutor himself.”

So no, Nancy. President Trump does not have to fear the judgment of history on this impeachment effort.

The judgment of history is going to be that a group of scoundrels in control of the U.S. House of Representatives placed partisan interests above the country, undermined the Constitution, weakened America in the world, and lied about the duly elected president of the United States.