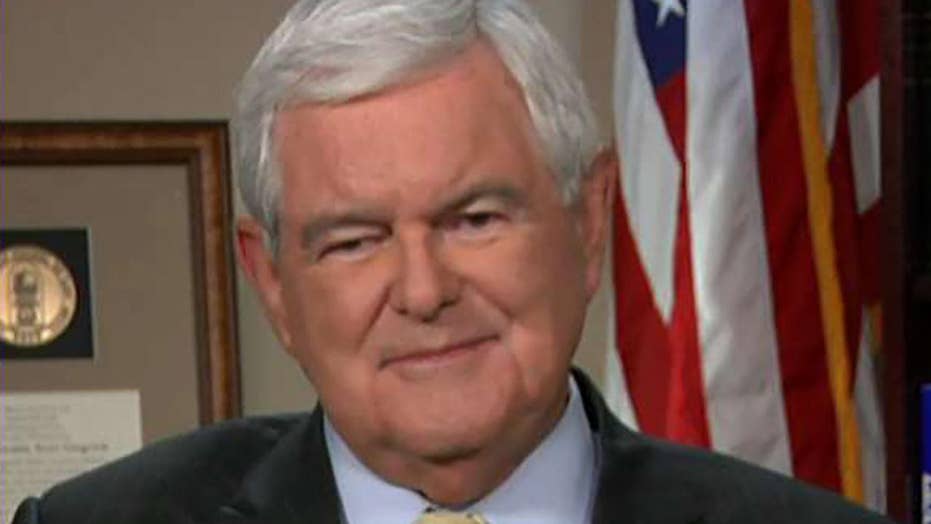 Gingrich on the future of the Republican Party under Trump

New questions over the party's future after the president sides with Democrats on the debt ceiling; former House speaker gives his take on 'The Story'

Time is running out for Republicans if they want to keep their governing majority in 2018.

After 238 days of having control of the White House and both houses of Congress, the GOP has only one major legislative achievement – the Senate confirmation of Supreme Court Justice Neil Gorsuch.

This is, in part, because Republicans tried to run before they could walk. Attempting to immediately repeal and replace ObamaCare without an iron-clad strategy for success was a mistake driven by post-election excitement and inexperience. Remember, many current House Republicans have never served when there was a Republican in the White House, and our Senate majority is still too slim to pass transformative conservative legislation.

But while early mistakes are to be expected, it is not too late to change the Republican trajectory.

Before we can fully bring our country out of the liberal, big government, dependency model, Republicans need to develop an economic-growth-focused strategy, build legislative momentum on the floor of Congress, and gain full support from the American people.

The key to achieving these goals – and growing our majority in both the House and Senate next year – is to pass simple, popular, tax cut legislation by this year’s end – preferably by Thanksgiving.

The cornerstone of this legislation must be a serious tax cut for small businesses so they can expand, create more jobs, and revive the middle class.

Despite what some on the Left assert, these are not “the rich” or “the top 1 percent” – far from it. Most small businesses are truly small.

On the high end, the Tax Foundation reports that the top earning small businesses pay marginal federal tax rates as high as 44.6 percent (when you combine the individual rate, the self-employment tax, and the net investment income tax). Adding state income taxes to the mix means these small business owners face tax rates that approach 50 percent.

Republican lawmakers should create a graduated system that caps the tax rate on the highest small business incomes at no more than the corporate rate of 38.92 percent, drastically reduce the individual income tax rates, or both.

Despite a slow start for the Republican-led government, Gallup reported on Wednesday that 51 percent of Americans approve of the way President Trump has handled the economy. This is higher than the economic ratings Barack Obama, Ronald Reagan, and Bill Clinton each received during their eighth month in office.  Only George W. Bush in 2001 had a higher economic approval rating, at 72 percent.

It is not surprising that Americans approve of how President Trump has been handling the economy. Since taking office, the stock market has been booming. The Dow Jones Industrial Average is up 12.25 percent; The Nasdaq Composite Index is up 22.92 percent; and the S&P 500 is up 11.49 percent.

Tax cuts on small business and the middle class will provide an enormous boost to the already improving economy. This will result in even more jobs, higher take home pay, and stronger growth.

When voters head to the polls on November 6, 2018, if they have been experiencing a robust American economy that is dramatically stronger than the slow-growth economy during the previous years of Democratic leadership, then they will elect more Republicans to office.

But Republicans must pass serious tax cuts for the middle class and small businesses by Thanksgiving to make that happen. It’s that simple.