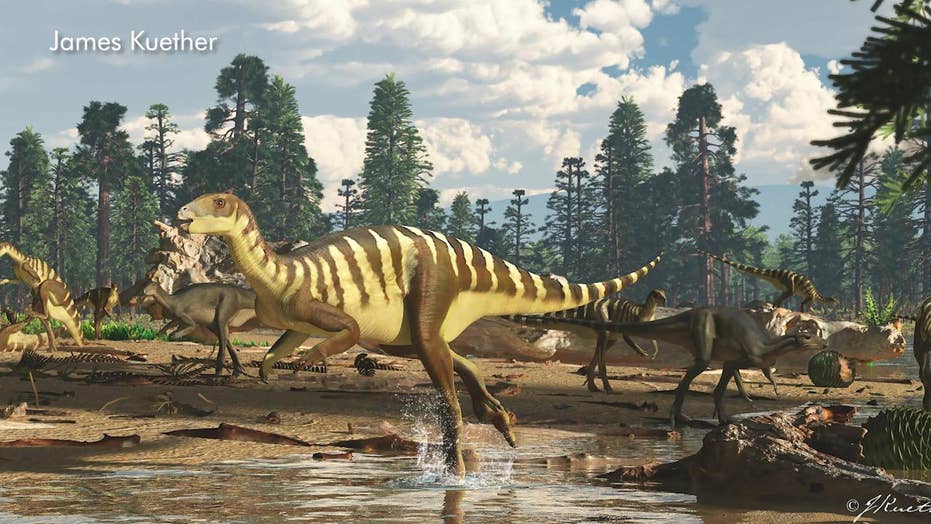 A small dinosaur, Galleonosaurus Dorisae, was found in Victoria, in the Southeastern part of the continent of Australia.

If you go to New York City, you must go to the American Museum of Natural History and see its remarkable new Tyrannosaurus rex exhibit.

I was so intrigued by T. rex when I was speaker of the House, I had the cast of a skull in my main meeting room. It was huge and Time Magazine highlighted it as an example of how different the 1994 "Republican revolution" was from normal Washington behavior. In fact, during really tense periods, I would remind our members that 75 million years ago the T. rex thought what she was doing was important.

My interest in dinosaurs goes all the way back to when I was nine or 10 years old, and I read a Time-Life book with lots of fascinating dinosaur pictures. I have had a deep interest in paleontology and the natural world ever since.

I was lucky enough to visit the exhibit, called “T. Rex the Ultimate Predator,” when I was in New York City launching my new novel. (Thanks to everyone who made it a national bestseller its first week of publication.)

I took two hours out of the book launch to go visit my favorite museum. Sitting on Central Park West, the American Museum of Natural History – with its 45 exhibit halls, planetarium, and special exhibits – is a remarkable combination of cutting-edge science and cutting-edge curation.

The T. rex exhibit combines the latest science with the latest technologies.

It is fitting that the American Museum of Natural History launched an extraordinary special exhibit on T. rex, because the very first one was discovered in 1902 by the museum’s famous paleontologist, Barnum Brown. Brown was a legendary collector and spent a lifetime gathering specimens for the museum – of which only a few can be exhibited. (There are more than 32 million specimens in the museum’s collections.)

The name "Tyrannosaurus rex" was given to the new discovery in 1905 by the extraordinary leader of the museum, Henry Fairfield Osborn. Osborn spent his life encouraging field expeditions all over the world and organizing and analyzing the results. He led the museum to its position as the preeminent natural history museum in the world.

Today, 117 years after the initial discovery of the Tyrannosaurus, our understanding of dinosaurs has evolved dramatically from the accepted science of that era. This new T. rex exhibit captures this emerging new understanding. It is presented so vividly that I urge you to spend time really going through the exhibit slowly. (Ninety minutes or more are reasonable visit just to this exhibit.)

There were four things that convinced me to urge you to visit the exhibit.

First, there is a very cute baby T. rex that resembles a big baby chick. It is so adorable that it will capture your heart.

Second, there is a fabulous, large movie screen that displays a forest and a life-sized T. rex. The T. rex is programmed to respond to movement. It will walk around in the forest until someone gets very close to the screen. Then it charges right at the place where the person is standing. Watching five- and six-year-old kids running up to the screen to stare at the dinosaur and then running away when it charges is great. A minute later they are back at the screen trying to attract the T. rex again. It is just a joy to watch young people getting engaged in a new world of ideas.

Third, the museum has an entire series of tyrannosaur specimens that show the animal’s evolution. You can see how over millions of years a small early predator became the largest in history.

Fourth, the museum has a feathered dinosaur that will change the way you think about these animals forever. This exhibit reflects two major revisions in our scientific understanding of dinosaurs in recent decades.

We now know that birds are descended from dinosaurs and many dinosaurs had feathers. You will see a feathered dinosaur as you enter the room. It looks somewhat like a gigantic bird. In addition to feathers, dinosaurs had apparently also developed the unique air sac system which enables birds to have far more oxygen than mammals. The result would have been that dinosaurs had far more usable energy than their competitors.

Today, we understand that T. rex had its tail up to balance its movement as it attacked feathered dinosaurs for lunch.

Dinosaurs had also developed the thin but very strong bone system that enables birds to be light enough to fly. It is this unique bone system which allowed very large dinosaurs to grow beyond what any land-based mammal has been able to match. The concept that dinosaurs and birds were related was considered radical into the 1960s, when the evidence began to be overwhelming. Then, suddenly, experts began to agree.

Second, dinosaurs had a version of warm-blooded behaviors, which enabled them to sustain spending energy far longer than cold-blooded animals. If you watch a lizard, for example, it can run quickly – but only for a short time. Then, it has used up its oxygen and its immediately available energy. It must stop and rest until its oxygen and energy supply has recovered.

For nearly a century, dinosaurs were believed to have been cold-blooded. If this were true T. rex would have kept its tail on the ground. However, we’ve found no dinosaur tracks with tails consistently dragging behind them. In the 1960s, when paleontologists Robert Bakker and John Ostrom began advocating for both the bird connection and the warm-blooded nature of dinosaurs, they were considered radicals. In some quarters, they were laughed at.

Now, they are seen as insightful pioneers who correctly analyzed the fossil record. Today, we understand that T. rex had its tail up to balance its movement as it attacked feathered dinosaurs for lunch.

Go to the museum and see a revolution in science portrayed right before your eyes.