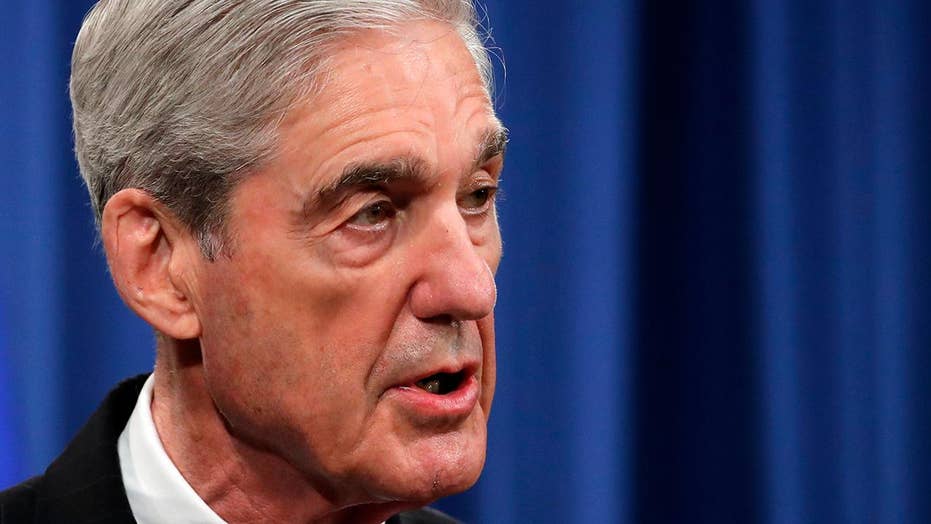 A Department of Justice letter outlines that the special counsel's testimony on the Russia probe should 'not go beyond' his public report and statement; Catherine Herridge reports from Washington.

The Democrats are desperate for Robert Mueller to appear credible in the eyes of the American people – but the former special counsel has already proven that he’s just another sleazy Washington politician with a biased agenda against President Trump.

Despite the fact that Mueller has already published his report exonerating the president, the great Russia witch hunt will continue for one reason and one reason only – Mueller doesn’t want the scandal to end. Mueller’s job was to investigate and then submit his findings to the attorney general.

Just a few short weeks ago, Robert Mueller insisted that his press conference was the last word on the entire collusion probe and that he would not comment any further on his findings or the details of the investigation. “[B]eyond what I have said here today, and what is contained in our written work, I do not believe it is appropriate for me to speak further about the investigation or to comment on the actions of the Justice Department or Congress,” he insisted at the time.

Clearly, Mueller never intended to keep that promise to the American people. When congressional Democrats subpoenaed the former special counsel, he played right along with their partisan agenda. Attorney General Bill Barr even offered Mueller cover to reject the subpoena, saying, “It seems to be the only reason for [Mueller to testify] is to create some kind of public spectacle. And if Bob decides he does not want to be subject to that, then the Department of Justice would certainly back him.”

Despite the fact that Mueller has already published his report exonerating the president, the great Russia witch hunt will continue for one reason and one reason only – Mueller doesn’t want the scandal to end. Mueller’s job was to investigate and then submit his findings to the attorney general.

Apparently, Mueller really does want “some kind of public spectacle.”

Mueller’s latest public stunt, however, is far from the only ploy he has used to stoke the politicized flames of the fake Russia collusion scandal. Instead of making a clear determination as to whether President Trump obstructed justice, for instance, Mueller wrote that there was insufficient evidence to determine whether the president was innocent or guilty, punting the question to Attorney General Barr.

Of course, Mueller didn’t need to leave the obstruction questioned unresolved. If the special counsel did not find definitive proof of any wrongdoing, then President Trump must be presumed innocent, like any other American citizen. Likewise, if Mueller and his team believed that the Department of Justice rules against indicting a sitting president were the only impediment to criminal charges, then the report could have explicitly noted this limitation.

Mueller, however, knew that he couldn’t substantiate an obstruction charge against the president to begin with. But he also knew that deferring the obstruction question to Barr would instantly politicize the entire report, triggering an avalanche of liberal media scrutiny and speculation directed at the White House while giving Democrats an opening to allege that there was some kind of a cover-up.

In reality, though, Barr’s handling of the Russia probe was far more honorable than Mueller’s. After examining the report with then-Deputy Attorney General Rod Rosenstein and other DOJ attorneys, the attorney general concluded that Donald Trump would not have been charged with obstructing justice even if he were a private citizen. Barr then voluntarily released the report to the public with minimal redactions and even allowed certain Members of Congress to see an unredacted version, even though he was under no obligation to do so. Naturally, not a single Democrat took him up on the offer.

By then, however, the Democrats and the media didn’t care about the validity of Barr’s decision, just like they’ve never cared about the nefarious origins and suspect timeline of the probe itself. All they’ve ever cared about is using Mueller’s investigation as the basis for impeaching President Trump.

Mueller’s actions throughout this sorry saga clearly prove that he’s just another establishment politician who doesn’t have an ounce of credibility when it comes to the Russia investigation, just like the Democrats who called him before Congress to testify.