Joe Biden wants to give free health care to illegal aliens. Unfortunately for Biden's pretentious to magnanimity, illegal aliens already receive free health care in the United States to the tune of $18.5 billion per year, according to a report published in Forbes last year. In Biden’s defense, it’s easy to lose track of 10 or 20 billion as Democrat presidential contenders compete for their party’s nomination by offering everything to everyone for free.

Democrats’ free stuff primary promises voters a need-free life from cradle to grave. Sen. Elizabeth Warren, D-Mass., has pledged free child care for all Americans. According to the Center for American Progress, child care for American infants costs on average nearly $15,000 per year. The financial services firm Moody’s pegs the cost of Warren’s program at $1.7 billion over 10 years.

Once young Americans leave free daycare, Democrat presidential candidates would like the government to educate them, not merely through high school, but through college as well. Sen. Bernie Sanders, I-Vt., has pledged to make community colleges and four-year public universities free for families earning less than $125,000 per year. Warren would take Sanders' plan a step further. In addition to free public college, she would give each of the 42 million Americans currently paying off their student loans up to $50,000. Warren herself estimates that plan would cost an additional $1.25 trillion over 10 years. In the Senate, Sen. Kamala Harris, D-Calif., Sen. Cory Booker, D-N.J., and Kirsten Gillibrand, D-N.Y., have all co-sponsored the “Debt-Free College Act,” estimated to cost $95.4 billion per year.

But college is only the beginning. After graduation come the real political handouts. For those recent grads “unable or unwilling to work,” a universal basic income would replenish their bank accounts each month. Most 2020 Democrats have endorsed this income entitlement through the Green New Deal, estimated to cost $93 trillion over 10 years.

Free of debt and flush with unearned income, Americans ought to have no problem paying for a roof over their heads. But just in case the people spend that money elsewhere, at least one 2020 candidate has promised to help pay off Americans’ mortgages with “a substantial grant they can put towards a down payment on a home anywhere in the country,” as Warren explains on her campaign website.

And finally, we arrive where we began: free health care. Every single Democratic presidential candidate has endorsed a national medical entitlement tending toward single-payer, socialized medicine. A recent study from the Mercatus Center at George Mason University estimates that such a program would cost $3.3 trillion per year, coincidentally the entire sum that the federal government collected through taxes in 2017. 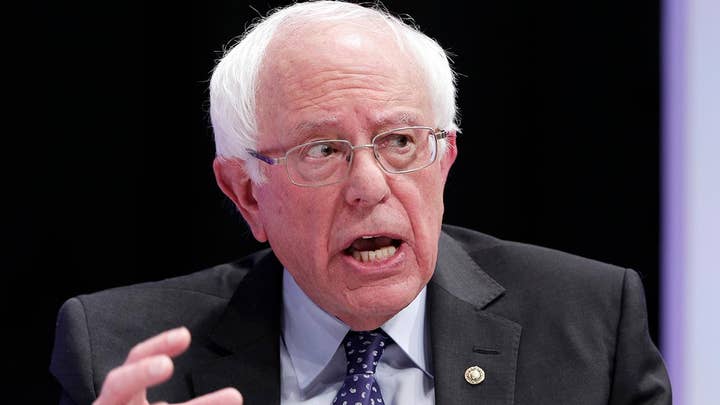 How do Democrats intend to pay for all of that free stuff? Simple: they’ll take it out of people’s paychecks.

“People say, ‘Well, Joe, how you gonna do all this?’” explained Joe Biden. “Well guess what? The first thing I’d do is I’m gonna repeal those Trump tax cuts.” Uncharacteristically honest in his old age, Biden has revealed the real motivation for these lavish federal programs: not charity, but control. The more the candidates give, they more they justify taking away.

A 23 candidate entered the free stuff primary Thursday. New York City Mayor Bill de Blasio opened his announcement by declaring, “There’s plenty of money in this country. It’s just in the wrong hands.” One wonders: in whose hands should my money be, Bill?

At least de Blasio has the decency to admit his avarice. The other 22 would-be presidents conceal their rapacity by pretending to give what they desire to steal. Worse yet, the heist threatens more than money. Each dollar taxed and spent deprives Americans of the freedom to make their own choices. From child care to health care, from higher ed to housing, he who pays the piper calls the tune. The Democrat presidential aspirants dare to do it all with our own money. Such is the high, hidden cost of free stuff.