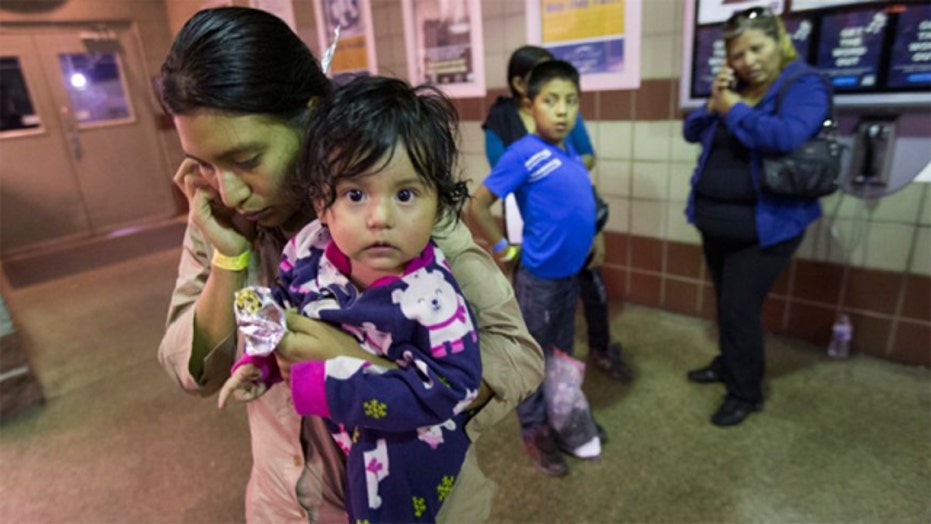 Humanitarian and political crisis over immigration

Editor's note: The contractor running the refugee camp at Lackland Air Force Base is "BCFS," not "Baptist Family and Children's Services" -- as noted in a previous version of this story.

A government-contracted security force threatened to arrest doctors and nurses if they divulged any information about the contagion threat at a refugee camp housing illegal alien children at Lackland Air Force Base in San Antonio, Texas, sources say.

In spite of the threat, several former camp workers broke their confidentiality agreements and shared exclusive details with me about the dangerous conditions at the camp. They said taxpayers deserve to know about the contagious diseases and the risks the children pose to Americans. I have agreed to not to disclose their identities because they fear retaliation and prosecution.

“There were several of us who wanted to talk about the camps, but the agents made it clear we would be arrested,” a psychiatric counselor told me. “We were under orders not to say anything.”

The sources said workers were guarded by a security force from the BCFS, which the Department of Health and Human Services hired to run the Lackland Camp.

The sources say security forces called themselves the “Brown Shirts.”

“It was a very submissive atmosphere,” the counselor said. “Once you stepped onto the grounds, you abided by their laws – the Brown Shirt laws.”

She said the workers were stripped of their cellphones and other communication devices. Anyone caught with a phone was immediately fired.

“Everyone was paranoid,” she said. “The children had more rights than the workers.”

She said children in the camp had measles, scabies, chicken pox and strep throat as well as mental and emotional issues.

“It was not a good atmosphere in terms of health,” she said. “I would be talking to children and lice would just be climbing down their hair.”

A former nurse at the camp told me she was horrified by what she saw.

“We have so many kids coming in that there was no way to control all of the sickness – all this stuff coming into the country,” she said. “We were very concerned at one point about strep going around the base.”

Both the counselor and the nurse said their superiors tried to cover up the extent of the illnesses.

“When they found out the kids had scabies, the charge nurse was adamant – ‘Don’t mention that. Don’t say scabies,’” the nurse recounted. “But everybody knew they had scabies. Some of the workers were very concerned about touching things and picking things up. They asked if they should be concerned, but they were told don’t worry about it.”

The nurse said the lice issue was epidemic – but everything was kept “hush-hush.”

“You could see the bugs crawling through their hair,” she said. “After we would rinse out their hair, the sink would be loaded with black bugs.”

The nurse told me she became especially alarmed because their files indicated the children had been transported to Lackland on domestic charter buses and airplanes.

“That’s what alerted me,” she said. “Oh, my God. They’re flying these kids around. Nobody knows that these children have scabies and lice. To tell you the truth, there’s no way to control it.”

I don't mean to upset anyone's Independence Day vacation plans, but were these kids transported to the camps before or after they were deloused? Anyone who flies the friendly skies could be facing a public health concern.

The counselor told me the refugee camp resembled a giant emergency room – off limits to the public.

“They did not want the community to know,” she said. “I initially spoke out at Lackland because I had a concern the children’s mental health care was not being taken care of.”

She said the breaking point came when camp officials refused to hospitalize several children who were suicidal.

“I made a recommendation that a child needed to be sent to a psychiatric unit,” the counselor told me. “He was reaching psychosis. He was suicidal. Instead of treating him, they sent him off to a family in the United States.”

She said she filed a Child Protective Services report and quit her job.

“I didn’t want to lose my license if this kid committed suicide,” she told me. “I was done.”

The counselor kept a detailed journal about what happened during her tenure at the facility.

“When people read that journal they are going to be astonished,” she said. ‘I don’t think they will believe what is going on in America.”

So it was not a great surprise, she said, when she received a call from federal agents demanding that she return to the military base and hand over her journal.

She said she declined to do so.

“I didn’t go back to Lackland,” she said.

Both workers told me while they have no regrets, they want to remain anonymous for fear of reprisals.

“They’re going to crush the system,” the nurse told me. “We can’t sustain this. They are overwhelming the system and I think it’s a travesty.”

BCFS spokeswoman Krista Piferrer tells me the agency takes “any allegation of malfeasance or inappropriate care of a child very seriously.”

“There are a number of checks and balances to ensure children are receiving appropriate and adequate mental health care,” she said.

Piferrer said the clinicians are supervised by a federal field specialist from HHS’s Office of Refugee Resettlement. She also said BCFS have 58 medical professionals serving at Lackland.

“Every illness, whether it is a headache or something more serious, is recorded in a child’s electronic medical record and posted on WebEOC – a real-time, web-based platform that is visible to not only BCFS but the U.S. Department of Health and Human Services,” she said.

As for those brown shirts, the BCFS said they are “incident management team personnel” – who happen to wear tan shirts.

My sources say Americans should be very concerned about the secrecy of the government camps.

“This is just the beginning,” one source told me. "It is a long-term financial responsibility.”