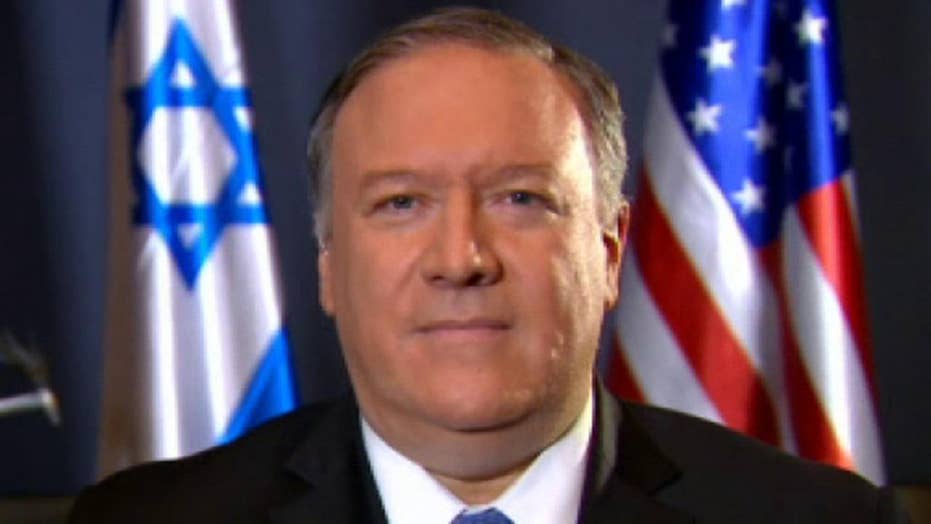 Pompeo on the conflict between Palestine and Israel

As part of the long-awaited Palestinian-Israeli peace plan, the Trump administration is stepping outside the parameters of past failed peace initiatives. In doing so, they are articulating an economic vision that aims to radically and positively transform the lives of the Palestinian people and set them on a path toward a brighter future.

It comes as the first stage of a broader effort aimed at resolving the decades-old conflict that has proven resistant to American-led attempts since the breakdown of the Camp David summit in July 2000, which President Clinton blamed on Palestinian leader Yasser Arafat.

The concept behind the “Peace to Prosperity” economic workshop scheduled in Manama, Bahrain on June 25 and 26, is to provide a vision for the Palestinian people of what life could look like in the context of a signed peace agreement with Israel, or as one senior adviser recently described it to me, “to come in with sugar and create momentum” for both the overall peace plan and the realization of Palestinian aspirations.

On a practical level, the gathering will “convene government, civil society, and business leaders to share ideas, discuss strategies, and galvanize support for potential economic investments and initiatives,” according to the joint U.S.-Bahrain statement. Saudi Arabia and the United Arab Emirates announced on Wednesday that they will attend.

Unfortunately, the Palestinian Authority (PA) appears to be blocking the path to a better future for the people they are supposed to represent, instead indicating they intend to boycott the workshop.

The old Palestinian guard restricts both the political and economic creativity of its people, and closes the door on those willing to open up opportunities for growth.

The reasons for the PA's intransigence cited in various media outlets are variations of the same theme: They are only interested in a political solution to the conflict, not an economic one. The latest iteration of what a political solution looks like to the current Palestinian leadership was recently expressed by PLO Secretary-General Dr. Saeb Erekat in an unwavering list of Palestinian demands and loaded phrases that have remained constant since 2000. They hope to achieve all their aspirations without directly negotiating with Israel, as they have remained disengaged from the process for the past several years.

In a recent tweet pointing to the 31 percent Palestinian unemployment rate, senior Trump administration peace envoy, Jason Greenblatt, suggested, “the PA is focused on calcified talking points that have not brought peace but only misery and prevented job creation.” He recommended that the PA “focus on peace AND the economy,” because “Palestinians deserve opportunity.”

President Trump’s peace team, which also includes his son-in-law and Senior Adviser Jared Kushner, and U.S. Ambassador to Israel David Friedman, repeatedly state that their full plan will also address all of the core political issues in the conflict. In fact, rather than a substitute for a political solution, they have stressed that economic progress can only be achieved if the core political issues are resolved. Both components are necessary for the success of the plan. So why would the PA balk at any opportunity created to bring prosperity to their people?

Part of the answer is the growing disparity between the Palestinian leadership and the people. After all, President Mahmoud Abbas is currently in the 15th year of his four-year term in office. It’s only natural for a certain comfort in the status quo to set in, regardless of whether it best serves the interests of the people.

Take, for instance, the case of Ashraf Jabari, a 45-year-old businessman from the West Bank city Hebron. He believes in economic cooperation and peaceful co-existence with his Jewish neighbors, recently launching an economic initiative to advance joint entrepreneurship between Israelis and Palestinians. He established The Reform and Development Party focused on economic prosperity for Palestinians, with hopes of tackling the issue of high unemployment.

Instead of permitting this effort to proceed, Jabari has become the subject of a well-orchestrated smear campaign and has been denounced as a “traitor” and “collaborator” with Israel. The Palestinian news website, Wattan, even called for him to be brought to trial for treason.

The old Palestinian guard restricts both the political and economic creativity of its people and closes the door on those willing to open up opportunities for growth. This recipe provides for neither a political settlement nor economic growth, sacrificing the future of their younger generations.

The “Peace to Prosperity” economic workshop in Bahrain is a refreshing opportunity for Palestinians to finally take the first proactive step toward a more promising horizon. It is incumbent on West Bank Palestinian leaders to engage constructively and finally choose a future fueled more by their desire to live in peace and realize their economic potential, than their desire to cling to the status quo and the talking points of the past.

Matthew R.J. Brodsky is a senior fellow at the Security Studies Group in Washington, D.C. He has advised the Trump administration’s peace team.