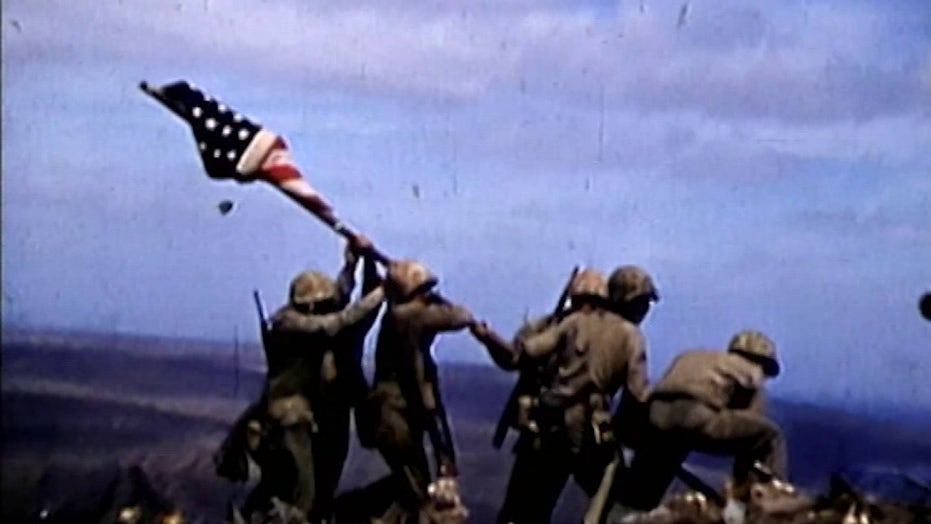 The following is adapted from “Unknown Valor: A Story of Family, Courage and Sacrifice from Pearl Harbor to Iwo Jima," by Martha MacCallum, available Feb. 25 on Amazon and at bookstores near you.

This week marks the 75th anniversary of the Flag Raising on Iwo Jima. AP photographer Joe Rosenthal’s iconic image was recreated as the statue that is the U.S. Marine Corps Memorial in Arlington, Va.

My mother’s cousin, Harry Gray, was an 18-year-old from Arlington, Mass., when he found himself headed for Iwo Jima on the USS Rochambeau, with his buddy George Colburn from Medford.

He wrote to my grandfather:

“We had a fair Thanksgiving, but of course couldn’t compare with home. We had turkey, dressing, celery, squash, candy and a cigar. Now we are planning Christmas onboard ship. I’ve been to confession three times since we left. To Mass every Sunday and some weekdays. The Chaplain comes from Jamaica Plains and knows the Priests at St. Agnes. I had quite a chat with him the other night.”

Shortly after that chat, young Harry wrote this inside a tiny prayer book that he kept in his wallet in his pants pocket.

“Holy St. Joseph, Spouse of Mary, be mindful of me, pray for me, watch over me...Beseech thee to bring this matter to a happy end if it be for the glory of God and the good of my Soul. Amen.”

His sister, my Aunt Nancy, says although the family always attended Mass on Sundays, she doesn’t remember him being particularly religious before he left for the Pacific.

But that changed, as it did for many young men. As their ship bounced on the choppy seas off the coast, the men, many of whom were about to die, asked Father Charles Suver, S.J., chaplain of the 5th Marine Division, about duty and courage. He told them, “A courageous man goes on fulfilling his duty despite the fear gnawing away inside. Many men are fearless, for many different reasons, but fewer are courageous.”

JANICE DEAN OPENS UP ABOUT HER DECADE-LONG BATTLE WITH MS

During those first hellish days of the battle, Father Suver would put himself in the line of fire alongside them, ministering to the wounded and giving last rites to the dying. The American flag was raised on Mt. Suribachi, in fact two flags were raised, 75 years ago this week, on the fifth day of the battle.

Many thought once Suribachi fell into U.S. hands, the island would be quickly secured.  But the battle raged on, in one of the most brutal fights in Marine Corps history, for another 31 grueling days.  (Among those who fought on Iwo Jima, 27 would receive the Medal of Honor, the most ever in a single battle. Nearly half of them did not live to see the island secured.)

On D+4, the 28th Marines had managed to make it from the blood bath of the black beaches, across the neck of the island, to looming Suribachi on the southern end. The attacks from air, sea and land had battered the Japanese living deep within the volcano’s miles of tunnels and caves. That morning, a tiny reconnaissance force of four soldiers from Company F began a slow crawl up the steep north face of the mountain and signaled back that the crater was clear, no Japanese in sight.

A patrol of 40 men from Company E, led by 1st Lt. Harold Schrier, was assigned to seize and hold the crest and raise a small American flag for all to see, to claim control of the island’s highest peak.

Climbing alongside the Marines that day, was Father Suver. Days before, a young lieutenant assured the priest that he intended to plant a flag at the top of Suribachi. Father Suver told him that if he succeeded, he would say Mass right under that flag.

At 10:15 a.m., the patrol stood high atop the crest, almost 600 feet above the sea. Two Marines, Lt. Schrier and Sgt. Ernest Thomas Jr.,  rummaged in the rubble and found a 20-foot cistern pipe and attached a small flag to it, pushing it into the rocky ground and sending it snapping in the high wind.

Just as the first photographer, Sgt. Louis Lowery, snapped his photo, two Japanese soldiers charged out from concealed positions, hurling grenades in a headlong attack. One headed straight for the flag raisers, brandishing his drawn sword. Pfc. James Robeson, who refused to be in the picture, shot him and the Japanese soldier fell head deep into the crater below.  The other enemy fighter lobbed his grenade toward Lowery, who vaulted out of his position in the crater and over the rim to avoid it.  He slid downward, his arms and legs clawing at the ground, before he landed 50 feet below. The camera smashed, but the precious film was intact. When the photo was developed, he had captured the moment: the flag raisers planting Old Glory as one Marine looks outward, keeping watch, rifle at the ready.

Below on the beach, Lt. Col. Johnson dispatched a runner to go get that first flag and put up a bigger one. AP photographer Joe Rosenthal, who missed the first flag raising, took advantage of the opportunity to catch the second one going up. As six Marines hoisted the bigger flag, Rosenthal scrambled to shoot the iconic moment.

Father Suver made good on his promise, and said Mass that day on the craggy ridges of Suribachi, under the misty skies, amid the chaos of war. He would later say he could hear the Japanese murmuring in the caves nearby.

The elation of capturing Mt. Suribachi was short-lived. In 1942, Winston Churchill spoke the words that were true that day as well, “Now this is not the end. It is not even the beginning of the end, but it is perhaps the end of the beginning.” Within days, three of the six men who raised the flag would be dead and a brutal month lay ahead.

During those weeks, another priest recalled that some of the young men, fearing their death was imminent, received communion four and five times a day, from the 19 Catholic priests who served with them on the island.

When the end of the battle of Iwo Jima appeared to be in sight, Harry Gray assured his family he would be out of there in a week, maybe less.  But on March 13, 1945, in a column of 19 men, as he made his way to the front for the first time, he was killed. He was just a few months shy of his 19th birthday. Weeks later, his buddy George Colburn wrote home to Harry’s mother and my grandfather.

“Harry and I were great buddies. I was up with him on Iwo Jima. I was also with him the day it happened. Harry was hit by a mortar shell, which killed three others. I’m sure he was killed instantly and there was no pain. He was wearing his rosary beads around his neck and I’m sure he went to heaven. Harry was a brave kid.”

Harry’s wallet and his tiny prayer book, stained in his blood, were sent home to Arlington with his other belongings.

Years later, George would say of his friendship with Harry, “we were closer than brothers.”

As Father Suver later observed, the most remarkable thing about Iwo Jima was the courage of the ordinary Marines and the care they showed for each other.”

Fleet Admiral Chester W. Nimitz said, “Among the Americans who served on Iwo Island, uncommon valor was a common virtue.” Seventy-five years later, we remember their valor, their humble prayers and their sacrifice for our freedom.

“Unknown Valor: A Story of Family, Courage and Sacrifice from Pearl Harbor to Iwo Jima," by Martha MacCallum, is available Feb. 25 on Amazon and at bookstores near you.

Martha MacCallum currently serves as the anchor and executive editor of The Story with Martha MacCallum (weeknights 7PM/ET). She joined FOX News Channel (FNC) in January 2004 and is based in New York.