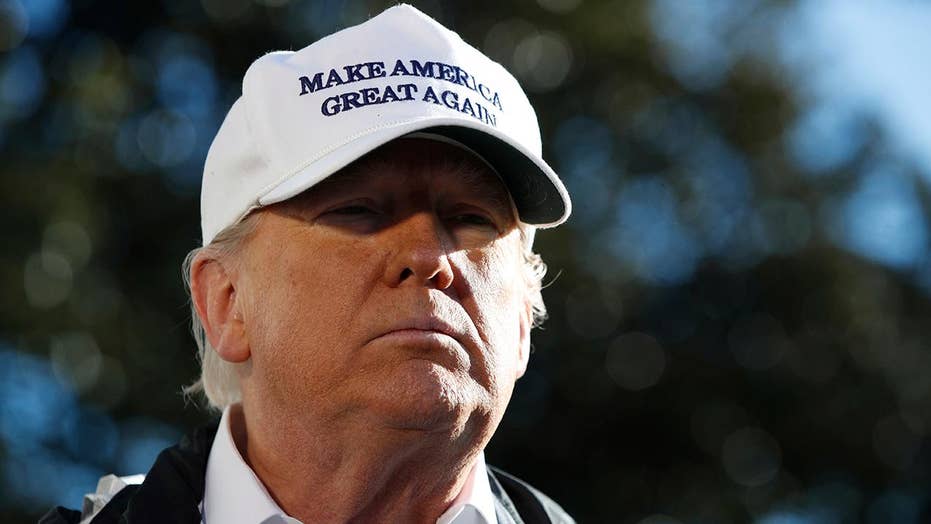 President Trump takes questions from reporters before his departure to the southern border in McAllen, Texas

Trump says he has the absolute right to declare a national emergency over border wall.

Results not resistance. That’s what I think the American public was expecting when they brought Democrats back into power in the House.

But instead, echoing Hillary Clinton’s ill-fated 2016 strategy, the Democratic leaders so far have fully planted a flag in simply opposing legislation, funding and appointments under the theory that putting lead boots on President Trump is the best way to get him out of office, even if the country is put on pause for another two years.

This is a fundamental mistake, and just as going overboard with Spartacus moments opposing the nomination of Brett Kavanaugh backfired and strengthened the Republicans in the Senate, this strategy too is likely to throw away the best opportunity Democrats had to build a lasting majority coalition by producing the results the Republicans failed to achieve.

MARK PENN: NO WINNERS IN THIS GOVERNMENT SHUTDOWN – BOTH SIDES SHOULD COMPROMISE TO REOPEN GOVERNMENT

The public ultimately was fed up with Paul Ryan, and under him Congress had about a 20 percent rating. He couldn’t get anything done, leading a fractured caucus to nowhere. He ultimately quit, along with 40 other Republicans. They literally abandoned the House, and suburban swing voters – voters who for a long time voted Republican – switched over to the Democratic Party. These voters were turned off by Trump, and frustrated by Ryan, because they fundamentally support progress and compromise. They are moderate, not liberal voters. They are not dancing in the hallway with Alexandria Ocasio-Cortez.

The voters just a few days ago were asked in the monthly Harvard Harris poll if the president and Congress should compromise or stick to their principles – 66 percent of the voters said compromise. Asked a specific question about $2.5 billion in barrier funding, 51 percent said they would approve of that compromise. The polling shows that regardless of who is to blame for the shutdown (most said Trump), every swing voter who matters agree that “compromise” should be the rule of the day – the one word the Democrats left out of their televised response.

While in 1995, working for President Clinton, we took a moral stand against Newt Gingrich in opposing a budget that would cut hundreds of billions of dollars in Medicare, Medicaid, education and the environment, we eventually settled on a balanced budget consistent with our values.

The idea that a few billion dollars for more walls, fences and border security rises to that moral level is overdone, especially since the Democrats supported nearly 600 miles of barriers across California not long ago. This is about politics, not policy. About the partisan bases, not the swing voters. And everybody knows it.

The Democrats should – and still can – get their shopping cart out and fill it with things they want like DACA work permits and turn this lose/lose stalemate into a win/win. Trump may preen, but the Democrats will be the real winners if they are seen as the ones who break the log jams and move the country forward.

The public wants immigration, infrastructure and health care fixed. It’s the people’s top priorities. With their partial win, Democrats are now in a strong position to negotiate good deals consistent with Democratic priorities. The immigration compromise has been sitting on the table now for years and there are millions of immigrants here who would benefit from a trade-off between more border security and work permits and a path to citizenship. Making them wait another two years in limbo is unthinkable.

Like the Republicans before them, the Democrats ran on a healthcare agenda and yet they have yet to produce a plan. The voters were scammed by Ryan and Co who in fact never had a coherent plan for dealing with coverage and as a result, Republicans paid a heavy price over this issue. The status quo is a win for no one, and yet Democrats so far are putting forward all sorts of campaign finance legislation, not health care fixes before the House. I’m confused – Did they run on campaign finance or health care?

Infrastructure, like justice reform, should be low hanging fruit for the Democrats and there is near unanimous agreement among the voters that we need another round of capital spending spurred by the government to make our country competitive.

We are going to have divided government for the foreseeable future, and such thinking is short-sighted and ultimately counterproductive. Democrats already gained in the midterm all the voters they need to win in 2020 opening up a 7 point lead – the trick is to keep them. These swing voters will reward the doers, and they will ultimately penalize the stallers.

Rather than being overshadowed by the Ocasio-Cortez show, the Democrats have an opportunity to realign the mainstream suburbs here on a longer-term basis if they become the party of action and fair compromise. They can be the ones who point fingers and fight over who caused the shutdown or they can be the leaders who stepped up, were bigger and ended it for the good of the country. The choice should be an easy one.