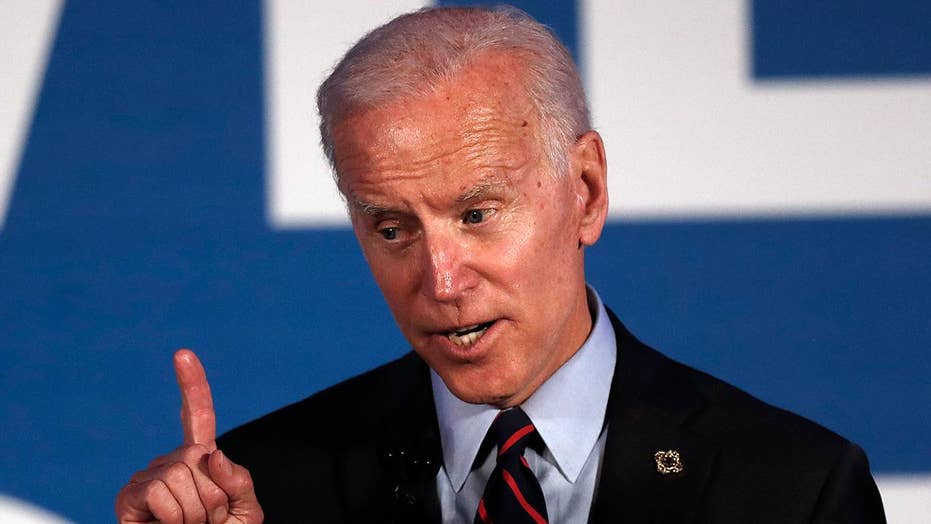 The Democratic presidential candidate's reversal on the Hyde Amendment may help Joe Biden with progressives, but could hurt him with other voters; Doug McKelway reports.

On the eve of the presidential debates, Democrats have a massive problem brewing. They all want to oust President Trump. To pull it off, they desperately need to woo back middle America, though they no longer conceal their contempt for Americans’ deeply held social values. On no issue is this clearer than on abortion.

Every leading Democrat has taken a position that, according to more than a decade of polling from Marist and others, is guaranteed to repulse and alienate at least 60 percent of Americans. They assure themselves the nation is racing left along with their extreme base. There’s a word for this: delusional.

In the wake of radical efforts to expand abortion in New York and Virginia, and Gov. Ralph Northam’s now-infamous description of how doctors decide whether a vulnerable baby born alive in a failed abortion receives medical care or is left to die, every sitting U.S. Senator running for president on the Democratic ticket voted against compassionate legislation – backed by 77 percent of Americans – to stop infanticide.

With supposedly “moderate” frontrunner Joe Biden’s reversal on the Hyde Amendment, a longstanding policy that prevents tax dollars from being used to pay for abortions, the Clinton-era mantra of “safe, legal, and rare” is officially defunct among the leaders of today’s Democratic Party. Not only that, anything less than full-throated endorsement of unlimited taxpayer-funded abortion, according to Sen. Kirsten Gillibrand, D-N.Y., is equivalent to racism.

Both sides agree the Hyde Amendment saves lives – more than two million overall or 60,000 each year, the Charlotte Lozier Institute found, making it one of the most consequential federal policies in existence. The pro-abortion Guttmacher Institute estimated a decade ago that a quarter of women receiving Medicaid choose life for their babies because of Hyde, and in recent days, the liberal site Vox reported on a new study showing an even greater state-level impact. Looking at just the state of Louisiana, the journal BMC Women’s Health found Hyde protections prevented 29 percent of abortions. Where there is partisan disagreement, it now centers around whether saving those children is a good thing.

Other left-leaning publications are urging caution. Last week, Slate columnist William Saletan systematically destroyed every myth about public opinion that Democrats who support forced taxpayer funding of abortion hold dear. Significant numbers of rank-and-file Democrats oppose it. Women oppose it just as much, if not more than men. About half of self-identified pro-choice individuals oppose it. Low-income Americans were twice as likely to oppose it as those with incomes above $50,000.

“Why would the gender gap on reproductive health care dissolve when the question turns to abortion?” Saletan writes. “Apparently, something about abortion bothers a lot of women in a way that birth control and STD treatments don’t.” Agreed – it’s the part about killing an innocent human being.

Saletan argues compellingly that Biden and others will pay a political price for their extremism. Indeed, every time they open their mouths on the topic, they remind voters how radical and out of touch Democratic Party leadership has become. President Trump wins by condemning abortion extremism and championing consensus policies like stopping late-term abortions when unborn babies can feel pain, contrary to the mainstream media narrative that middle ground no longer exists. The more Democrats talk about their agenda of abortion on demand through birth and even infanticide, paid for by taxpayers, the more they lose.

This hasn’t stopped 16 top candidates from lining up to compete for the heart – and money – of the nation’s largest abortion business, Planned Parenthood, like an episode of "The Bachelor: Extreme Abortion Edition." Planned Parenthood ends the lives of more than 332,000 unborn children each year and vowed to spend at least $60 million to sway political races in the last two election cycles combined. Planned Parenthood may be the only group in America that can find any daylight between these contenders.

Susan B. Anthony List’s pro-life team will be working through Election Day to educate millions of voters about the stance of the Democratic Party and the stakes of this election for unborn children and their mothers. Extremism may win these candidates accolades from the abortion industry, but reality says that the vast majority of Americans are just not that into them.