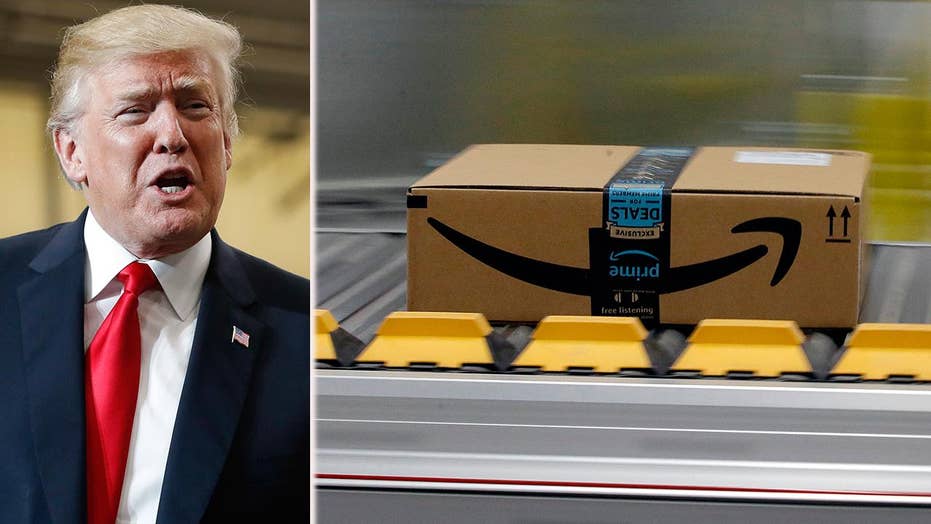 Why is President Trump attacking Amazon?

They all stem from President Trump’s ambition to create or keep jobs in the United States. That is the connective tissue of the vast majority of the president’s policies, including his single-minded push to cut business taxes and to recraft our immigration policies to prioritize work skills over family ties.

If you look through the prism of boosting employment, you see why, for instance, the president celebrates many big companies like Ford and Carrier that promise to increase jobs in the U.S., but has waged a Twitter war against Amazon.

President Trump is completely correct in describing Amazon as a “job-killer.” In the past few years, the online giant has crushed thousands of brick-and-mortar retailers and cost the country hundreds of thousands of jobs.

That said, President Trump’s tweetstorm against Amazon is clearly tinged with personal animus towards Jeff Bezos, Amazon’s founder and owner of the Washington Post.

In the president’s world, the Post is emblematic of the liberal media’s relentless and unfair attacks on him and his administration. Moreover, President Trump has hinted that Bezos has used the Post to lobby against policies that might have curbed Amazon’s growth.

President Trump’s criticism of the media is nothing new, but the intensity of his attacks on Amazon has unleashed a flood of enthusiasm and sympathy for the e-tail behemoth.

That sympathy is misplaced.

President Trump is completely correct in describing Amazon as a “job-killer.” In the past few years, the online giant has crushed thousands of brick-and-mortar retailers and cost the country hundreds of thousands of jobs.

Layoffs have hit Macy’s, Sears, Toys “R” Us, the Limited – the list goes on and on. And those are just some of the big names.

Last year, “in the United States alone, on average 1 retailer failed every 12 minutes. Five failures per hour, 24 hours per day, 365 days per year” according to a piece published by the Retail Owners Institute written by Patricia M. Johnson and Richard F. Outcalt.

President Trump lashed out at Amazon on Twitter a day after an Axios report said he planned to ‘go after’ the retail giant. Here’s a look back at Trump’s beef with Amazon.

For smaller firms, the sales per employee would be lower. As Amazon has taken market share, the number of employees needed to produce the same retail revenues has dropped significantly.

And as Amazon has moved into many more categories of goods, more brick and mortar retailers have fallen by the wayside. This trend is hollowing out small towns, eviscerating shopping malls and putting thousands out of work.

Many argue that nothing could have prevented this shift in how consumers shop, and that is probably true. Amazon has changed the retail landscape forever by offering shoppers unprecedented convenience; the company has brilliantly built a dedicated and loyal clientele.

In the beginning, however, legislators could have, and should have, erected speedbumps to slow the devastation. A decade ago, Amazon was not collecting state and local taxes on its sales, giving the company a significant advantage over brick and mortar retailers.

Amazon in the crosshairs of President Trump?

Amazon stock sells off following report of President Trump's desire to 'go after' the company, targeting their tax treatment. Gary Kaltbaum and Hitha Herzog weigh in on 'Your World.'

The edge created by not collecting state and local taxes approached 10 percent in states like Louisiana and Tennessee. And as consumers became expert at instantly comparing prices, that sales tax difference loomed large.

The advantage could have been eliminated had officials demanded that all retailers collect sales taxes.  But Congress, as usual, failed to act on bills meant to level the playing field, such as the Main Street Fairness Act.

By the time Amazon was shamed into paying state and local sales taxes, as it now does on all but third-party sales, it had gained enough scale to lower its cost of operations, giving it an even greater edge.

It wasn’t just competitors that were harmed by the sales tax disparity; it was also the states and localities that lost out on significant revenues. This argument should have pushed Congress to act: the loss of sales tax revenues from online shopping robs states and localities of much-needed funds, which are often replaced by measures like lotteries or taxes on sweetened beverages or tobacco, which are unquestionably regressive.

Of course, not only did legislators whiff on the sales tax issue, they actually gave Amazon another competitive advantage, by pushing to raise the minimum wage. Companies with proportionately higher numbers of employees, like local mom-and-pop outfits, suffer as pay moves higher, while Amazon feels little pain.

Bottom line: President Trump is about a decade late. Had he been in office years ago, he might have slowed Amazon’s ascent and allowed smaller firms to compete more effectively.

Today the president’s most effective weapon against Amazon’s meteoric advance, and a tame one at that, would be raising the company’s shipping fees.

The president’s claim that taxpayers are subsidizing Amazon’s low postal rates is buttressed by a research note published last year from Citigroup. That report concluded that “by charging below market rates on parcel volume (mainly eCommerce) the Post Office has essentially turned free shipping into a future tax payers’ burden.”

The analysis scrutinized the fully-loaded costs of shipping by the Postal Service, taking into account its large accumulated benefits requirements for retired workers, and concluded that “average parcel rates would need to increase ~50% initially to break even.”

President Trump can (and should) demand the Postal Service investigate this charge and, if it is true, raise rates to make Amazon pay the full costs of its deliveries.

Overall, however, there is not much the president can do to staunch the bleeding of traditional retailers. For those of us who value the advice we get from the local hardware store owner or a salesperson in a clothing store, who hate the demise of neighborhood stalwarts, and who sympathize with those whose businesses simply cannot compete, that’s a darned shame.