Democrats like House Speaker Nancy Pelosi, D-Calif., and Senate Minority Leader Chuck Schumer, D-N.Y., are about to sell American workers, and the country, down the drain. Now that the trade talks with China have turned testy, they are running away from their earlier support, happy to blame President Trump for any economic fall-out from the protracted negotiations. If we are to win this all-important trade dispute with our Asian rival and level the playing field, the entire country – including Democrats – need to stand together.

Given our bitterly divided politics, President Xi does not expect that to happen. We need to prove him wrong and show the world that our country can unite on behalf of our working men and women. Not only would this be good for the U. S., but it would also be good for Democrats, helping them to win back Rust Belt voters lost to Trump in 2016.

Democrats can signal solidarity by:

1. Issuing a resolution in support of the White House’s tough stance against Beijing’s unfair trade practices.

LIZ PEEK: TRUMP VS BIDEN MAY NOT BE THE MATCH DEMOCRATS ARE HOPING FOR

Numerous Democrats, including Senate Minority Leader Chuck Schumer and Rep. Debbie Dingell from Michigan, have previously voiced support for Trump’s China battle. More recently, Politico reports, they are waffling. Schumer said he doesn't “fully agree” with Trump’s approach and “warned the president from coming up with a “weak solution.”

When it appeared we were heading towards an early resolution of the trade spat, Democrats were happy to go along. After all, they know that those blue-collar voters who helped elect Trump were angry over trade policies that allowed the loss of millions of jobs to China and other low-wage countries. They know that for all their claims about helping the middle class, the middle class saw their interests ignored both by Republicans allied with corporate America and Democrats like President Barack Obama in thrall to the wonders of globalization.

President Trump campaigned on a different message, vowing to reset our unfavorable trade agreements. For many in the depleted manufacturing industries, in particular, that was a compelling platform. 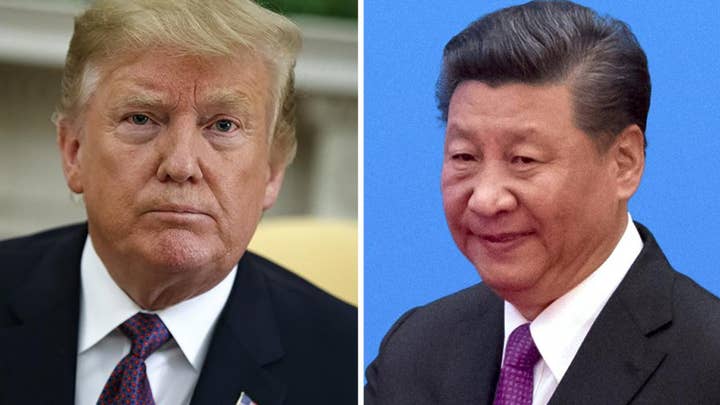 Today, President Trump is trying to force significant changes on how China deals with the U.S. He wants them to swear off the theft and illegal expropriation of intellectual capital that has helped Beijing climb the value-added chain, and to reduce barriers to entry.

It isn’t easy. The dispute escalated recently, resulting in increased tariffs applied by both countries.

These fees are taxes, and like any taxes will reduce consumer spending and economic growth. There are already signs of slowing. U.S. retail sales in April fell a surprising 0.2 percent, possibly because of uncertainty over the trade dispute.

In China, which has to date absorbed a greater share of the tariff costs, the impact is more pronounced. Retail sales for April in China grew at the slowest rate in 16 years, coming in at 7.2 percent, down from 8.7 percent in March and the estimate of 8.6 percent. Similarly, industrial production grew at only 5.4%, compared to estimates of 6.5 percent, the weakest rate since the financial crisis a decade ago.

This is the time to pressure China. Though President Xi faces no election deadline, unlike President Trump, the Chinese leader has assumed responsibility for the economy (and nearly everything else) as he has grasped almost unlimited power; a serious slowdown might undermine his authority.

The most recent setback in the talks apparently stemmed from a miscalculation by the Chinese leader, who assumed that political need would drive Trump to settle for a much-softened deal. He expected the White House would not risk a market sell-off or economic hit going into the 2020 election, knowing Trump’s critics would blame his trade war.

He was wrong about Trump’s commitment but right about Democrat sniping. Now is the time for Democrats to prove Xi wrong, by issuing a resolution of support for the president.

Democrats can also help move negotiations forward by quickly approving the USMCA, the revised NAFTA agreement. Pelosi and other senior House Democrats met recently with U.S. Trade Representative Robert Lighthizer to discuss the USMCA, indicating concerns that the agreement lacks sufficient environmental and labor protections. They are playing politics, unwilling to give Trump a “win” before the 2020 election.

They know that the updated NAFTA pact will not be revised since all three countries have to sign off on it. Pelosi also knows that if the agreement were brought to a vote, the House would pass it. She will not do it, even though the revisions benefit American workers. Shame on her.

Passing the USMCA would signal to the world that the U.S. is not opposed to trade but, rather, insists on fair agreements.

Finally, it is American farmers, who generally vote Republican, who are being targeted by Beijing. Xi hopes tariffs on soybeans, pork and other agricultural products, will hurt farmers and dampen their enthusiasm for the trade war, and the president.

The blow struck by the first round of tariffs was softened by as much as $12 billion in aid directed to farmers. Another program is in the works, totaling perhaps as much as $15 to $20 billion. Democrats should work with the White House to facilitate this relief, providing another sign of solidarity.

As we confront Beijing, nothing could be more important than a unified front. China is counting on our fractured politics delivering them a win. Just as a military conflict should bring the country together, so should this trade war. President Xi should find no succor among American politicians, on either side of the aisle.