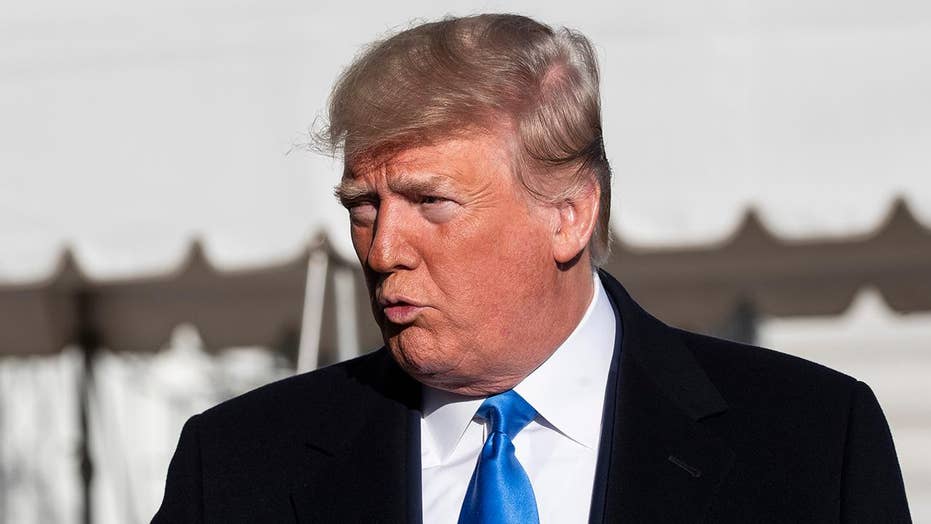 Here’s what House Speaker Nancy Pelosi has done by undertaking a reckless and partisan drive to impeach the president: absolutely guaranteed that anyone who voted for Donald Trump in 2016 will vote for him again next year. Guaranteed, as a result, that Trump will be reelected.

Across the United States, tens of millions of Americans are furious that Donald Trump, a man they respect, has been bullied and bloodied by hate-filled, crazed political antagonists who mock him, lie shamelessly about his policies, obstruct his every move and, most disgusting of all, savagely demean his wife and children.

Those same Americans are also furious that we have wasted three years pursuing fake accusations of collusion with Russia and now Ukrainian skullduggery; they wonder what might have been accomplished over these past three years if not for the constant undermining of Mr. Trump and his administration.

Pelosi has opened a door that may never close. For all the pious posturing, Democrats have drummed up at best a flimsy and half-baked prosecution of this president. The proceedings mean that their next leader will likely face similar trials. Once impeachment becomes a political cure-all, our long-stable government will be vulnerable to ongoing partisan attacks like the one we are witnessing today, and presidents may fall like dominoes.

This is not hyperbole. I imagine that even the most cursory investigation of past presidents would yield, by the standards of today’s Democrats, grounds for impeachment.

Did not President Obama back the investigation into Trump’s campaign, as Lisa Page and Peter Strzok’s text exchanges seem to indicate? On Sept. 2, 2016, Page wrote Strzok that "potus wants to know everything we’re doing," referring to President Obama.  Did Obama not endorse the pursuit of the Russia dossier, which was funded by the Clinton camp to undercut Donald Trump’s run for the White House? Obama may not have been on the ticket personally, but he certainly knew that his legacy was at stake. That could be viewed as “personal gain” – the same motivation that Pelosi says drove Trump’s demand that Ukraine investigate Joe Biden.

The push to impeach is driven by the sore losers of 2016, by a party and their media enablers who are terrified that the humiliation of 2016 will be visited upon them again in 2020. Voters get that, which is why the polling on impeachment has moved against Democrats.

Pelosi’s party has no answer, and no candidate with a plausible alternative, to a booming economy that has brought jobs, higher incomes and hope to millions of Americans.

Democrats are panicked that even their most dependable backers – blacks and Hispanics, among others – are warming to their improved lives and prospects, and to Trump. The most recent employment report, showing that we added an extraordinary 266,000 new jobs, reinforces their enthusiasm. How can Elizabeth Warren win when she wants to blow up an economy benefiting so many?

Trump has spent the past three years fending off the most vitriolic and hateful attacks and – perhaps most maddening – getting zero credit for any of his accomplishments.

And, make no mistake, Americans credit Donald Trump for the better times. They remember Obama gurus like Larry Summers telling them about “secular stagnation,” that America’s future was bleak and that manufacturing was dead in our country.

They remember Paul Krugman forecasting a “global recession with no end in sight” and a stock market collapse if Trump were elected president.

Democrats have spent the past three years “resisting” the Trump presidency. They have blocked legislation to secure our borders and to cut through the bureaucratic red tape that even Obama swore to dissolve. They have smeared fine men like Brett Kavanaugh, because they didn’t like his opinions, have engaged a compliant press to print lies about the president and his inner circle and have offered up plenty of their own.

During the Mueller investigation, House Intel Chair Adam Schiff repeatedly claimed to have hard “evidence” of collusion; he had none, but the liberal media parroted those claims nonetheless.

Republican Devin Nunes is suing CNN for $435 million, claiming the cable news outlet purposefully ran a false story about him meeting with a Ukrainian prosecutor in Vienna, in order to discredit his work on the Intelligence Committee.

Meanwhile, we too wonder what might have been accomplished during the past three years if Trump had enjoyed bipartisan cooperation on matters of national interest. For instance, might we have seen an infrastructure program? Could we have enabled public school reforms so that inner-city kids actually learn to read and write? Democrats can’t do that; they owe too much to the teachers' unions.

Could we have fixed our broken immigration system, resolving the DACA issue in exchange for a merit-based approach that polls show Americans endorse?

Even with the constant bad faith maneuvering of Democrats, Trump has managed to appoint 170 new judges, including two justices on the Supreme Court. He has undone significant suffocating legislation, like Obama’s maddening Waters of the United States rule and the Clean Power Plan, which would have significantly raised America’s energy costs and reduced the benefits of our fossil fuel bounty.

Trump also withdrew the U.S. from the Paris Accord, which allowed China to continue fouling the atmosphere while hobbling U.S. growth. More important, he has taken on China’s unacceptable trade practices and has forced the world to confront Beijing’s criminal undertakings.

He has prioritized rebuilding our military, which was long overdue. He has browbeaten NATO into upping their financial commitments, something American presidents have tried and failed to do for 40 years. He has stood up for American interests around the world, and for that, the elites cannot forgive him.

Is Trump without flaws? No. He is thin-skinned and unpredictable, and sometimes picks fights that would be better ignored. But he has spent the past three years fending off the most vitriolic and hateful attacks and – perhaps most maddening – getting zero credit for any of his accomplishments. I have some sympathy for his frustration, and I imagine those who supported him in 2016 do as well. They will support him in 2020; count on it.