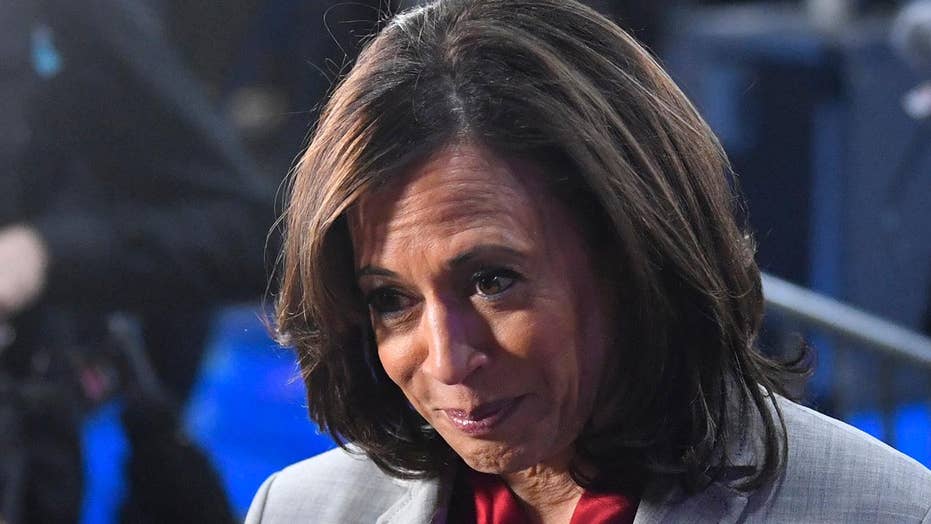 Journalists grew concerned about a political party’s supposed racism this week. Only this time the media were complaining about the Democratic Party.

What took them so long?

Democratic presidential candidate Sen. Cory Booker of New Jersey, who is African-American, went off about it on MSNBC’s “All In with Chris Hayes.”

“We're spiraling towards a debate stage that potentially – we're still fighting to get on it, but could have six people with no diversity whatsoever," he complained. (Democrats used to consider gender part of diversity. Oh well.)

But the Harris narrative finally captivated a news media that had eagerly forgotten the controversy regarding Democratic Virginia Gov. Ralph Northam’s college yearbook photo showing one person in blackface and another in Ku Klux Klan garb.

It was an unusual spot for journalists who typically depict those on the right as racist and those on the left as enlightened.

“To me, they held her to a different standard, a double standard, to other campaigns,” Castro said.

The Root was upset that “Kamala Harris Wasn't Allowed to Fail Up Like a White Boy.” Senior Reporter Terrell Jermaine Starr said the media fixated on her previous job as a “lock ’em up prosecutor” and attorney general.

Starr added that former Vice President Joe Biden’s own background is far worse and Biden is still running. “If Harris is a cop, Biden is the police chief,” he wrote.

The Democrats’ problems with race didn’t stop there.

“I shouldn’t have done it. I am not a person of color,” Warren told the audience, according to Bloomberg News.

Journalists have repeatedly defended Warren on this issue and bashed President Trump for nicknaming the senator “Pocahontas” because of her lie.

The New York Times called Trump’s comment a “slur” and a “racially incendiary jibe.” The Times Magazine devoted more than 8,000 words to profiling Warren, but included just one paragraph to her about her pivotal controversy.

MSNBC’s “Morning Joe” Host Joe Scarborough had called the president’s criticism of Warren coded racism and an appeal to “the white nationalist wing of, of this movement.”

Meanwhile, a staffer whose tweets “contain anti-Semitic, homophobic, misogynistic and racist language” is no longer with the Bernie Sanders presidential campaign, according to ABC News.

The Washington Free Beacon revealed how new Deputy Director of Constituency Organizing Darius Khalil Gordon’s past on Twitter was filled with a ton of things that I won’t quote here.

Of course, traditional outlets didn’t discover the comments, so kudos to the Free Beacon for doing actual research.

New candidate Michael Bloomberg was even caught in the controversy. His opponent Booker also found it “stunning” when he learned Bloomberg had referred to him as "well-spoken.” It was a gaffe reminiscent of Biden’s comment about then-candidate Sen. Barack Obama as “the first mainstream African-American who is articulate and bright and clean and a nice-looking guy.”

Not to be left out, the Buttigieg campaign had “a gathering of African American supporters in South Bend,” reported NBC News. The kicker was that Buttigieg was interrupted by a man wearing a Black Lives Matter shirt.

Liberal racism, sexism and anti-Semitism have been the donkey in the room for a long time. The media were finally forced to confront it, at least briefly.

Pelosi, who has bashed Rosen before as “Mr. Republican Talking Points,” used the opportunity to claim she had the moral high ground.

“As a Catholic, I resent your using the word ‘hate’ in a sentence that addresses me,” she said.

The news media, who love it when Pelosi opposes the pope and the Catholic Church on abortion, rallied around her faith when it suited them. Both CBS and NBC promoted an identical Pelosi quote: “Don’t mess with me.”

Imagine the media reaction to a Republican politician calling out a reporter, pointing a finger directly at the journalist and telling him “Don’t mess with me.”

Actually, you don’t have to imagine it. We see it daily when the press rallies in defense against every criticism they get from the right.

NBC News Chief Foreign Affairs Correspondent and MSNBC anchor Andrea Mitchell took Pelosi’s side readily. Mitchell said that the speaker, “as a person of deep faith, which we know to be the case with her, really took offense at anyone questioning.”

Mitchell didn’t seem to recall that Pelosi’s “deep faith” has strident disagreement with the Catholic Church on abortion.

CNN loved it as well. Chief Legal Analyst Jeffrey Toobin described Pelosi comments as “one of the many iconic Nancy Pelosi moments from this period.”

Joe Scarborough mocked the reporter for daring to ask a question. “Maybe James Rosen would like to ask Donald Trump, do you hate children, or do you hate Jesus?”

The confrontation was a reminder of how faith is both a sword and a shield for the press. They wield it against anyone they disagree with and use it to defend those they support.