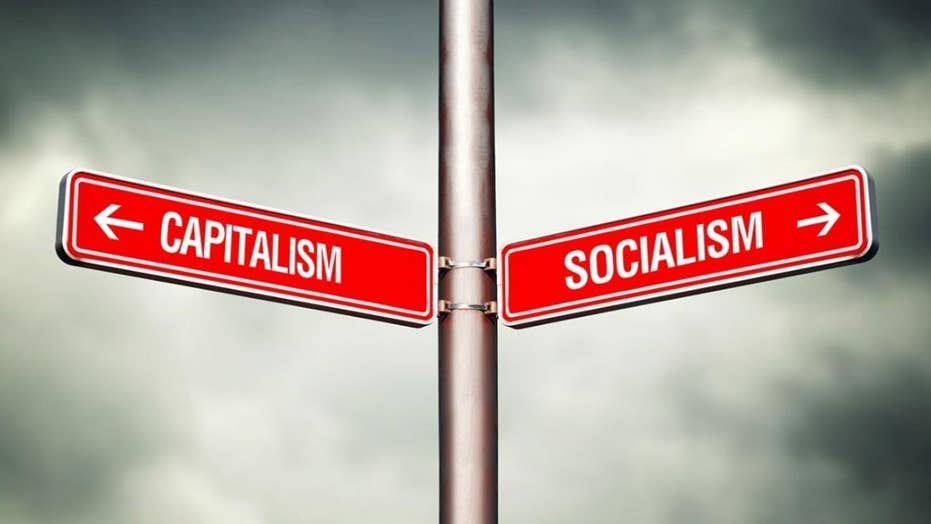 Turning Point USA founder and President Charlie Kirk discusses a poll suggesting on 52 percent of Americans have a positive view of capitalism.

Democratic presidential candidate Sen. Bernie Sanders and his fellow socialist Rep. Alexandria Ocasio-Cortez say the only way to end poverty in America is to destroy the economic system that made the U.S. the most powerful and prosperous country on Earth and the land of opportunity.

The claim by the senator from Vermont and the congresswoman from New York is a dangerous lie that ignores economics, history and reality. It makes as much sense as telling a family you will burn down their house so they can get a better one – but then failing to build anything of value on top of the ashes after their home goes up in flames.

Sanders and Ocasio-Cortez have become the most prominent faces of a radicalized Democratic Party that has moved further left than any time in American history. Not long ago they would have been considered fringe extremists with no chance of winning election to a federal office.

Yet incredibly, Sanders is now a leading contender for the Democratic presidential nomination this year, and Ocasio-Cortez’s supporters talk about her as a presidential candidate in future years. If you pitched Hollywood a movie about these socialist comrades 20 years ago no studio would buy it – it would have been considered too crazy to be taken seriously.

AOC, a 30-year-old who worked as a bartender before being elected to the Congress in 2018, recently complained in a widely publicized interview that too many of her Democratic colleagues in Congress believe “we can capitalism our way out of poverty.”

Instead, AOC, Sanders and other radical Democrats (some of whom deny they are socialists but really are) argue that they need to supersize government, send tax rates skyrocketing, and fundamentally transform America into a socialist state to enable people be able to escape poverty.

As I explained in Part I of this column last week, that argument has been proven false on numerous occasions over the past 100 years.

Just look at world history since the Russian Revolution of 1917, almost 70 years after a compassionate-sounding theory of economic justice and equality was laid out by Karl Marx and Friedrich Engels in “The Communist Manifesto” in 1848. When communism and socialism jumped from the pages of “The Communist Manifesto” to become the basis of government in Russia and elsewhere, tyranny and economic ruin followed.

In fact, Marx gave the world the most economically destructive, toxic, blood-soaked idea of the 20th century. That idea was the Marxist belief that important economic decisions should be made by the collective, rather than by individuals. Although Ocasio-Cortez and Comrade Bernie are not authoritarians like the Soviets or communists in China, they share that dangerous idea.

While one socialist society after another collapsed in the post-World War II years, capitalist economies thrived and their people became healthier, wealthier, and happier than ever before. This was true not just in the United States, but around the world.

However, this doesn’t mean America’s current conditions are perfect or that our nation is free from suffering. More than 38 million Americans lived below the poverty line in 2018 – nearly 12 percent of the population.

The poverty rate did go down in the final years of President Barack Obama’s administration and under the recent remarkable economic boom experienced under the Trump administration. But we can and must do much better.

Ocasio-Cortez, Sanders and all of the Democrats now running for president – including those who don’t identify as full-blown socialists – say that the best way to fix America’s poverty problem is to confiscate wealth from business owners who create jobs, as well as other wealthy individuals.

Some Democratic politicians have said high taxes should make it impossible for anyone to be a billionaire, and would make sure that there are a lot fewer millionaires and that they have a lot less money. They sell themselves as modern-day Robin Hoods who supposedly want to rob from the rich to give to the poor – but this time via massive new government programs that would employ legions of taxpayer-paid bureaucrats to do the “robbing.”

We know from experience that this doesn’t work.

As the old saying goes, the best anti-poverty program is a job. And as another old saying goes, you can’t have employees without employers. By taking as much money as they can squeeze out of businesses and wealthy Americans, the socialists and near-socialists would suck money out of the economy that could otherwise be used to create jobs. That would leave more people dependent on government assistance to survive.

Despite tens of trillions of dollars spent on such programs since the start of President Lyndon Johnson’s War on Poverty in 1964, policymakers have hardly made a dent in America’s poverty problem. There’s no question that they meant well. But this war is the longest in American history – a fact that ought to make our nation’s leaders and would-be leader consider a different battle plan.

The sad truth is that poverty in many communities – including numerous towns and cities controlled by those who insist bigger government is needed to reduce poverty – are worse off today than they were 50 years ago. (For example, see Detroit’s remarkable collapse).

There are much better ways to improve prosperity than punishing those who have wealth and building gigantic government programs that lock impoverished people into a cycle of dependency. Here are just two of the many bold ideas that the United States should pursue.

One of the keys to tackling poverty is improving education. Study after study shows that young people who receive a high-quality education are far more likely to rise out of poverty than those who are trapped in failing schools.

The best and quickest way to improve the U.S. educational system – which has for years been lagging behind comparably wealthy nations around the world – would be to provide all children in the nation with the freedom to attend the school they and their parents choose.

It is heartbreaking and completely outrageous that millions of students in this country are forced to attend K-12 schools that won’t or can’t provide a quality education. No child should ever be subjected to a broken school system simply because of his or her ZIP code.

The best way to fix this problem is for states to create universal education savings account programs, which would empower all parents with the ability to enroll their children in the school that fits their needs – whether that be a private, public, or home school.

The essence of the capitalist system that made America the great nation it is today is the belief that competition stimulates improved quality and lower prices. If schools had to compete for students, they would have to offer improved educational opportunities – and those that failed to do so would close.

Help, not a handout

One of the biggest problems with government poverty programs is that they don’t provide a way for people to escape poverty. Instead, they often trap people in welfare systems by making it difficult or even impossible to stop receiving government aid without losing access to essential services, such as health coverage.

State and city governments can help people in these difficult situations by revising poverty programs so that recipients are able to receive partial benefits – relative to the size of their incomes – as they work and become more self-sufficient.

Poverty programs should also provide all able-bodied enrollees with job-training and/or access to education programs, so that those who are unable to find a job can gain marketable skills while they receive benefits.

When able-bodied enrollees are required to work or enter job training or education programs, they are more likely to find their way out of poverty. For example, after such requirements were created in Arkansas in January 2016, enrollment of able-bodied, childless adults in the state’s food stamp program fell by 70 percent. Even better, the families who left Arkansas’s welfare program saw their incomes triple, according to an analysis by the Foundation for Government Accountability.

If similar models were adopted across the United States, millions of people would move out of poverty, just as they did following the welfare reforms created by Congress and President Bill Clinton in the 1990s.

The way to lower the poverty rate in the United States isn’t to embrace principles that have destroyed nations and led to economic turmoil, but rather to embrace the same ideals that made America the economic powerhouse it is today: free markets and individual liberty.