For more than a year, we have been documenting how the Democrats, working in tandem with far-left smear squads, have set about to stifle conservative speech. Now these folks think of themselves as rough-and-tumble kind of football players, but they're ultimately blinded by the bright lights.

Through campaigns -- a full outrage that stoked on social media -- they whip up their frenzied followers and then that justifies their trampling on the free speech rights of others. Everybody's all upset.

But they've never tried their little charade on someone like Candace Owens before. On Tuesday, she entered their holy ground -- the Judiciary Committee hearing convened by Democrats. The topic: hate crimes and the rise of white nationalism.

In her opening statement, Owens said the following: "I received word on my way in that many of the journalists were confused as to why I was invited. And none of them knew that I, myself, was the victim of a hate crime when I was in high school. White supremacy, racism, white nationalism -- words that once held real meaning -- have now become nothing more than election strategies. Every four years the black community is offered handouts in fear -- handouts and fear. And the ancestry of black Americans is being insulted every single day. I will not pretend to be a victim in this country. I know that that makes many people on the left uncomfortable."

Well, Congressman Ted Lieu was lying in wait for Ms. Owens and held up a little microrecorder and played the following edited clip of Owens from a previous interview.

Owens: I actually don't have any problems at all with the word nationalism. I think that it gets -- the definition gets poisoned by leaders that actually want globalism. The first thing people think about in -- at least in America, is Hitler. But if Hitler just wanted to make Germany great and have things run well, OK fine. Problem is that, he wanted -- he had dreams outside of Germany. He wanted to globalize ...

Rather than ask her questions or, heck, even challenge her views on the victimology being peddled by liberals to black America, liberal henchmen Lieu attacked her character. Now, he doesn't honestly believe that Candace Owens was somehow empathizing with Hitler -- of course he doesn't.

What these activists are saying is this: The price of working for Trump is, you are now and forever unclean and untouchable. My friends, no CEO, no college president, nor any potential employer, should ever bow to these types of threats -- and that's what they are, threats.

But guess what? Owens refused to let the moment pass unchallenged. She responded to Lieu's playing of the edited audio, by saying the following: "What I responded to is that I do not believe that we should be characterizing Hitler as a nationalist. He was a homicidal, psychopathic maniac that killed his own people. A nationalist would not kill their own people. I think it's pretty apparent that Mr. Lieu believes that black people are stupid and will not pursue the full clip in its entirety."

Could you imagine if a liberal African-American woman were treated this way? What left would do if she were speaking her truth? Feminists across America would be in an all-out revolt. You'd have Samantha Bee sputtering about misogyny, and Kirsten Gillibrand and Elizabeth Warren would be leading candlelight vigils across America at campaign rallies.

Now let me be crystal clear here: What's happening is an all-out assault on America's freedom of conscience, freedom of expression, freedom of movement. And it's even happening to children who step out of line. An 11-year-old little girl, Bella Moscato, was called out by her teacher in Long Island for choosing Donald Trump as her hero for a school report. Again, imagine the uproar if some teacher asked some student not to write about Barack Obama as her or his hero?

And of course, media lightweights use the same tactics. MSNBC host Joe Scarborough implied on the air that he and his poisonous panelists will relentlessly malign Bill Barr and anyone else who works for or even supports the Trump administration for that matter. Now his words are thinly-veiled threats, warning shot across the bow, not just for Barr, but for anyone even thinking of taking a job with the Trump administration.

Former DHS Secretary Kirstjen Nielsen is another target. On Tuesday, Alexandria Ocasio-Cortez tweeted favorably in response to a leftist who wants to punish Nielsen, even if she returns to private life. So apparently it wasn't enough to harass people at their homes and in restaurants. Now far-left activists are launching petition drives to prevent these former Trump staffers from earning a living after their government service. Nice! 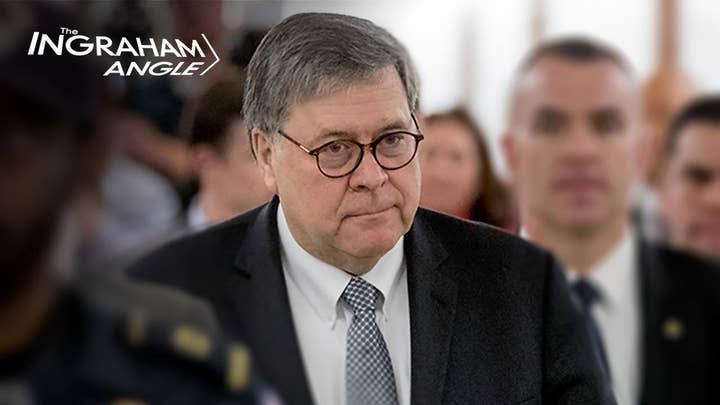 Now what these activists are saying is this: The price of working for Trump is, you are now and forever unclean and untouchable. No CEO, no college president, nor any potential employer, should ever bow to these types of threats -- and that's what they are, threats. Even once reasonable -- fairly reasonable -- Democrats are now supporting this campaign of branding the Trump team with a big scarlet letter, a big "T."

But that's the goal, isn't it? The left is uninterested in actually doing things called solving problems. It's moved to 24/7 character assassination of Trump's Cabinet, his staff, Trump himself, and really anyone who supports his policies and has the guts to say so. Even little kids are fair game to the left.

Rather than staying in a defensive crouch when they threaten and demonize patriotic Americans, my friends, we at "The Ingraham Angle" will continue to expose these tactics, the funding of these organizations underneath all of it, and their ultimate aims. And together I'm extremely confident that we're going to preserve free and open debate in this country that we all love.

Adapted from Laura Ingraham's monologue from "The Ingraham Angle" on April 10, 2019.