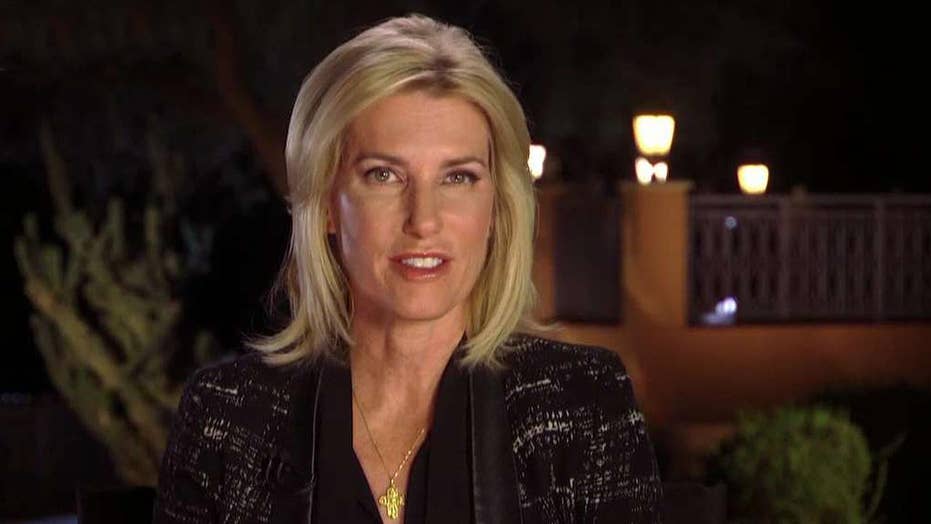 Ingraham: Race to the bottom

The better Donald Trump does among African-American voters, the more race-obsessed the Democrats and their shameless media enablers become.

States like Arizona are not just front and center ahead of Tuesday's midterms because of a close Senate race. They resonate nationally because the issue of immigration has come to the fore once again.

Since President Trump has refocused attention on the issue, of course, he is being labeled a racist. You just heard him refer to that in his speech Thursday night in Missouri.

Democrats, by the way, have long decried dark money and dirty tricks and politics. They are always bemoaning that., Well, we're going to lay out how they are shamelessly engaging in both this midterm season. It's off the charts. But first, it's a race to the bottom.

The better Donald Trump does among African-American voters, the more race-obsessed the Democrats and their shameless media enablers become. When young African-Americans leaders were recently invited to the White House by the president, they were instantly derided by the left.

"It was not a summit. It was a make America great rally. The use of young blacks as props which really is an insult to them," said Al Sharpton recently on MSNBC.

Oh, insult to them, Al? Really? Aren't those racist sentiments by the way? Isn't it wrong to lump people into political camps based on their skin color or believe that only authentic African-Americans are the ones who despise Donald Trump?

And I thought stereotyping people based on their skin color was the definition of racism. And why should a reverend be speaking on these terms at all by the way? I think what's going on here is they are worried about their prospects. And so now the left is engaged in a coordinated effort to brand Donald Trump as a racist.

CNN's Don Lemon said recently, "People know when you say nationalist and smart people know what that is a dog whistle for. That's a wink and nod to white nationalism."

"But this man doubled down after 11 beautiful people were shot and killed while worshipping. For what? Some ideal of whiteness that Donald Trump represents and spews out of his mouth every single day," said MSNBC analyst and Princeton University Professor Eddie Glaude.

Yes, and that's what Donald Trump thinks about every morning when he wakes up. Whiteness. Come on. You are better than that.

The better Donald Trump does among African-American voters, the more race-obsessed the Democrats and their shameless media enablers become.

What was Oprah Winfrey doing in Atlanta Thursday if not fear mongering? Here's what she said:

Got to hand it to Oprah. She is a great speaker, but I kind of I liked her better when she was giving away Toyotas and refrigerators.

To try to tie the candidacy of the Georgia Republican gubernatorial candidate Brian Kemp to the scourge of racism and even lynchings? Come on, Oprah.

It's dehumanizing. It's completely baseless. It's totally cruel and again, I say, you are much better than that and you are much bigger than that. And I'll also say this to Oprah Winfrey, how is this living our best life now?

This kind of broad-brush race baiting desensitizes us to the real racists out there who should be condemned and prosecuted to the fullest extent of the law when they commit heinous crimes and use violence to hurt and maim people of a different race.

By the way, what did Kemp ever do aside from running against a black opponent? Nothing.

For a taste of true racial obsession and outright racism, hear what a few prominent Democrats said this week that didn't get all that much attention:

KARA SWISHER, JOURNALIST: What do you think of Cory Booker and his comment, and feel free --

SWISHER: No, what do you think about him saying kick them in the shins essentially -- start to get to that kind of political --

CLINTON: Well, that was Eric Holder.

CLINTON: I know they all look alike.

SWISHER: No they don't.

SEN. JOE DONNELLY (D), INDIANA: Our state director is Indian-American, but he does an amazing job. Our director of all constituent services, she's African-American, but she does an even more incredible job than you could ever imagine.

I still can't believe that comment. All right, look, come on, it's all race all the time.

Democrats like Gillum and Stacey Abrams in Georgia are featured in endless puff pieces across all media. And most of these pieces focus on their race as their biggest selling point for the candidacy.

OK, I assume they are about more than that. They have views and they have ideas. But it's always about race and race for the most part alone.

But black Republicans like John James running for Senate in Michigan or Omar Qudrat, a Muslim Republican running for Congress for California's 52nd district, hardly get covered at all.

So I guess race doesn't matter if you are a Republican. It's not historic at all. The reason again for this leftist race baiting, Trump's policies are working for African-Americans and the results are now beginning to come in.

Democrats sense it. They are losing their grip on the black community. Black unemployment is down. Black entrepreneurism is up. And the polls are moving.

Check out this new Harvard/Harris poll. A year ago, President Trump's approval rating among black Americans was a paltry 10 percent. Today, it's almost triple at 29 percent. And look at this, a year ago, only 17 percent of African-Americans approve of the president's handling of the economy. Today, 40 percent approve of his economic prowess. And this may be the most revealing number of all. On the issue of immigration, 15 percent of black Americans like Trump's approach last year, not great.

He is about America and that is a good thing.

And back to Obama for a moment because he is campaigning all across the country. Aside from his incredible example of being -- he's a great father and himself a historic figure -- you have to ask this question: what did Obama actually do, substantively do for black America?

African-American wages during his eight years were flat. ObamaCare was a complete and total disaster. And he did little to protect the black community from the competition of cheap, illegal labor. He hardly even talked about it.

Do not let the race hucksters convince you to embrace the failure of the past. For the Democrats, this is not about protecting minorities, it's about regaining raw political power even if it means turning American against American and stopping the economic revival we've seen, the best I think we've seen in decades across all races and all ethnicities.

Adapted from Laura Ingraham's monologue on "The Ingraham Angle," November 1, 2018