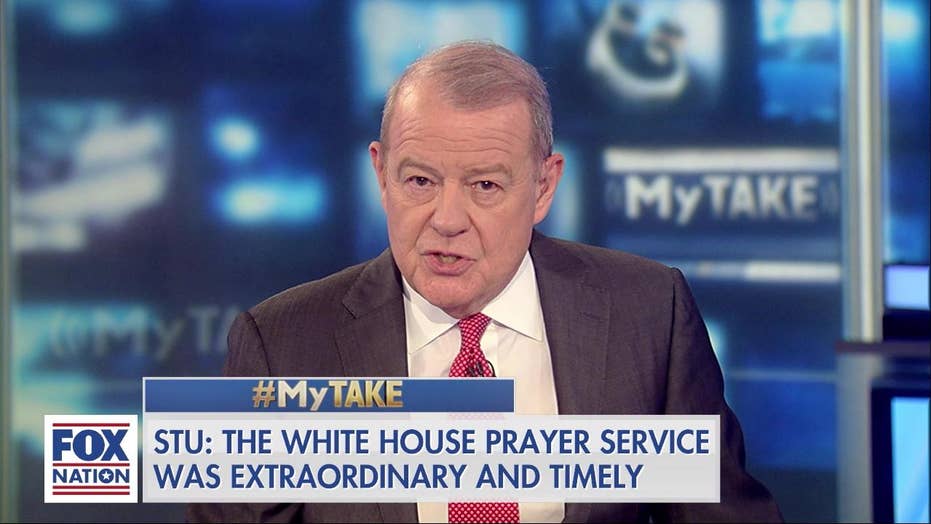 Stuart Varney: The National Day of Prayer at the White House was a joyous call for unity

At a National Day of Prayer event Thursday at the White House, I had the opportunity to express my personal condolences to Rabbi Yisroel Goldstein, one of the victims of the April 27 shooting at his synagogue in Poway, Calif.

The rabbi was shot in both hands in the attack. A member of his congregation, Lori Kaye, was killed and two other people were shot and wounded. The attack came exactly six months after a gunman killed 11 Jews at prayer and wounded seven others in a Pittsburgh synagogue.

Both the Pittsburgh and Poway shootings elicited a full range of emotional responses from Americans of every walk of life. That this depth of anti-Semitic hatred still exists in our world, let alone in our own country, is very troubling.

Unfortunately, the cases of judges and government officials acting out of anti-religious bias continue to increase, particularly against Jewish Americans. Such open hostility can be taken by some as a license to act on their own bigotry.

Unfortunately, the cases of judges and government officials acting out of anti-religious bias continue to increase, particularly against Jewish Americans.

Recently in California, a Small Claims Court judge ordered a rabbi to pay thousands of dollars for reporting vandalism against his synagogue to police – even though the rabbi and his synagogue were the undisputed victims of the vandalism.

After Rabbi Netanel Louie showed officers the damage a group of vandals did to the synagogue, the police investigated the incident, some of which was caught on video. Two individuals were charged with trespass, theft and vandalism.

But after officials did not find enough evidence to ultimately bring the case to trial, one of the people charged sued the rabbi for reporting her to the police. Incredibly, after a trial that lasted less than an hour, Judge Richard F. Walmark ordered Rabbi Louie to pay the woman over $6,000.

Yet this isn’t even the worst example of government hostility.

Officials in Airmont, N.Y., have spent the better part of three decades violating the religious liberty rights of Jewish residents, despite the actions of federal courts.

In 1991 – the same year of Airmont’s incorporation – the federal government filed suit alleging the village had been formed for the purpose of excluding Jews through zoning restrictions on their places of worship.

In 1997, legal testimony revealed one Airmont founder, James Filenbaum, stated that "the reason of forming this village is to keep people like you out of this neighborhood." He was directing his comments to Jewish citizens.

The village settled one lawsuit and the other resulted in a consent decree that prevented village officials from using zoning laws to discriminate against the Orthodox Jewish community. But as soon as that consent decree expired, the village went back to its old bigoted ways.

For almost three decades, government officials in Airmont have imposed excessive fees and criminal punishment for worship. Those actions have driven Orthodox Jewish residents to fearfully practice their faith in hiding.

After investigating accusations of religious discrimination for nearly a year, First Liberty Institute filed two federal lawsuits against the village – one of which seeks $25 million in damages – on behalf of a school and several local rabbis.

The U.S. Constitution guarantees us all the right to the free exercise of religion. Hatred and harassment toward those peacefully exercising their religion is evil and must be overcome with good.

While Americans may disagree over religion, there should be no disagreement on the free exercise of religion. Moreover, anyone who seeks to intimidate, harass or deny free exercise to those peacefully practicing their religion must be condemned in the strongest terms possible, lest these actions turn to harm.

Perhaps no one has said it better than Rabbi Goldstein himself, who said after the tragedy at his synagogue: “I want to conclude that people should realize and recognize that God has given us a blessed country, United States of America. Amazing values which we are so grateful for. Let’s go back to the basics. Let’s bring back the religious freedoms that we had; let’s give our children the opportunity to have a moment of silence; let’s embrace each other and I’ve got to tell you, the love that I have had from all religions has been incredible.”

Now it’s time for not only citizens, but our government officials and judges, to get that message.