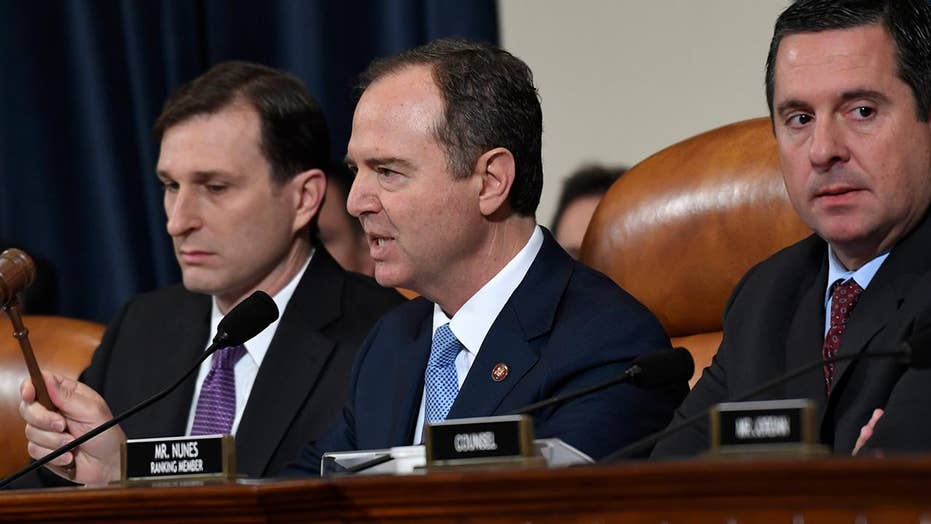 House Intelligence Committee Chairman Adam Schiff, D-Calif., whose youthful dreams of being a successful Hollywood screenwriter never materialized, is proving to the world that he does indeed have a talent for concocting fictional stories.

Schiff has pre-scripted a televised production titled “The Impeachment Inquiry Against President Trump.” The story would likely be deemed too absurd and too boring to make it onto the silver screen as a drama, though it might succeed as a comedic farce – too silly to be taken seriously.

Schiff has held closed-door castings, selected the actors and written the 45-minute opening salvo for each act of his work of fiction. Act II was held Friday, as former U.S. Ambassador to Ukraine Marie Yovanovitch testified before Schiff’s Democratic-controlled committee.

Unfortunately for Schiff, the American people know a farce when they see it, and his fictional production is collapsing before his very eyes. Though he has carefully orchestrated an attempted coup against the man who 63 million Americans elected as our president, Schiff’s desperate political attack on President Trump has been exposed as nothing more than a witch hunt.

he American public recognizes truth versus assumption, presumptions, and the personal opinions of witnesses without firsthand knowledge. Schiff seems to think Americans are stupid and gullible and will think the fairytale he is spinning is real. He is wrong.

The truth is on the side of President Trump. Should Trump-hating House Democrats choose to impeach the president based on no crime, no facts and a whole lot of conjecture, they will pay a hefty price at the ballot box on Nov. 3, 2020.

Americans elected members of Congress to legislate and work to make our country stronger and more prosperous, and to help us build better lives for our families. Sadly, Schiff and his fellow Democrats have abandoned their legislative duties and responsibilities to wage a non-stop smear campaign against President Trump.

Few members of Schiff’s cast of characters who he is calling to testify have firsthand knowledge of the matter at the center of the Democratic impeachment crusade – the July 25 phone call between President Trump and Ukrainian President Volodymyr Zelensky. Nor have they spoken with or had any insight into the thought process of President Trump.

The reality – as opposed to the fictional story Schiff is producing – is that there was nothing wrong with the July 25 Trump-Zelensky call. Both presidents have confirmed this. But like all good fiction writers, Schiff won’t let the facts get in the way of his storytelling.

The fact is that just like the rest of the world, Schiff’s star witnesses learned of the content of the Trump-Zelensky call Sept. 25. That was the day when President Trump – in an abundance of unprecedented transparency – chose to release the transcript of his phone call with President Zelensky.

This week’s three impeachment inquiry witnesses – former Ambassador Yovanovitch, acting Ambassador to Ukraine William Taylor, and Deputy Assistant Secretary of State George Kent – all admitted that they were not on the July 25 phone call and have zero insight into the decision-making of President Trump.

Taylor, the first witness called by Democrats, admitted that he has never so much as met with or even spoken to President Trump.  He even went so far as to say that “what I can do here for you today is tell you what I heard from people.” In other words, pass along hearsay.

And, indeed, he did.

In a rather bizarre attempt to provide credence to his sorely lacking theory that aid to Ukraine was tied to that nation investigating former Vice President Joe Biden and his son Hunter, Taylor offered a new source for his self-described “clear understanding.” The source was a staffer sitting at a table with U.S. Ambassador to the European Union Gordon Sondland who overheard a phone call between Sondland and President Trump.

In questioning at the Intelligence Committee hearing Wednesday, Rep. Jim Jordan, R-Ohio,  dismantled Taylor’s sourcing when he exposed the original basis for Taylor’s pronounced “clear understanding” on the linkage of U.S. aid to Ukraine and that nation’s investigation of the Bidens.

The Democrats’ next witness, Deputy Assistant Secretary of State Kent, proved to be no more knowledgeable.  Like Taylor, he had not spoken to or met with President Trump and had “never in 27 years been on a call made by a president of the United States,” he said. That includes the July 25 Trump-Zelensky phone call.

In what has become a clear trend, former Ambassador Yovanovitch – the Democrats’ third witness – was asked point blank Friday: “When did you first learn of the contents of the July 25th call between President Trump and President Zelensky?”

“The day it was made public, like about two weeks ago by the White House,” she replied.

Further, she testified that she “cannot speak for what President Trump thought or what others thought” and had not spoken to President Trump or Chief of Staff Mick Mulvaney this year.

Meanwhile, those who actually have spoken to President Trump have made it clear that there was no quid pro quo.

Former U.S. Special Envoy to Ukraine Kurt Volker, who has spoken with President Trump, testified in an earlier closed committee session that he had no indication of a quid pro quo – a linkage of a meeting President Zelensky requested with President Trump – to an investigation request.

“I was never asked to do anything that I thought was wrong,” Volker said. The Intelligence Committee released a transcript of his closed-door testimony.

Additionally, Ambassador Sondland testified that the president said:  “I want nothing. I want no quid pro quo. I want Zelensky to do the right thing.”

Volker, backing up this assertion, testified: “Gordon was repeating here what we all understood.”

And if the hearsay witnesses – Taylor and Yovanovitch in particular – had anything useful to provide us in their testimony, it was their testament to the character of Volker, the exonerating witness.

“In my dealings with Kurt Volker… over the last 30-something years, I consider him to be a man of honor and somebody who’s a brilliant diplomat,” Yovanovitch testified.  “And, you know, I think he is working in the interest of our country.”

The bottom line is that the witnesses with no direct knowledge of the Trump-Zelensky phone call or President Trump’s decision-making offered little more than hearsay evidence. However, they vouched for the character of the fact witnesses who actually had interactions with President Trump and said that there was no quid pro quo or linkage of aid to a Ukrainian investigation of the Bidens.

On top of this, Ukraine never conducted such an investigation.

If Schiff’s fanciful script was for a movie, the film would be a box office bust and be yanked from theaters after just a couple of days. Unfortunately, Schiff and his fellow Democrats are determined to continue the farcical impeachment witch hunt to smear the president with false accusations, hoping this will hurt his reelection chances.

This blatant partisan political attack is appalling and a tremendous waste of time. But Democrats won’t stop – their severe infection with Trump Derangement Syndrome and their laser-focus on politics over governing won’t let them.