Sen. Bernie Sanders, the improbable current front-runner for the Democratic presidential nomination, is lying to the American people when he tell us that “democratic socialism” simply means he wants to give the vast majority of Americans new opportunities to succeed and wants millionaires and billionaires to pay their fair share of taxes.

In fact, my extensive research on comments Sanders has made going back decades shows he has warmly embraced not just socialism but communism, and praised tyrannical dictatorships that have trashed the freedoms Americans enjoy under the Bill of Rights that are part of our Constitution.

Sanders is not just another liberal Democrat who wants to expand social programs, in the tradition of Presidents Franklin Roosevelt and Lyndon Johnson. He is the most radical candidate in American history with a real shot at winning the presidential nomination of one of our two major political parties.

While candidates have run for president in the past on radical platforms under the banners of socialist, communist and other fringe political parties, they have drawn only tiny percentages of the vote.

Sanders, elected in Vermont as an independent and not as a Democrat, is trying to convince the American people that policies implemented around the world by socialist and communist regimes that have resulted in death, destruction and economic mayhem are in our best interest.

But like the wolf in the children’s tale of Little Red Riding Hood who donned a nightgown and covered his face to pose as the young girl’s grandmother, Sanders tries to disguise socialism. The socialist senator wants us to believe socialism is a kind and caring philosophy that is the embodiment of justice and equality for all.

Sanders thinks that by sticking the word “democratic” in front of the word “socialism” he can trick millions of Americans into supporting the horrific philosophy he espouses.

The truth is that more than 167 million people were exiled, imprisoned, or killed by socialist and communist parties in the 20th century.

And, contrary to claims made by Sanders, his talking points about socialism’s successes in countries such as Sweden, Norway and Denmark are completely false. Those countries are not socialist nations and their citizens are, in many ways, not better off than most Americans.

Sanders thinks that by sticking the word “democratic” in front of the word “socialism” he can trick millions of Americans into supporting the horrific philosophy he espouses.

Yet despite these well-documented facts, Sanders has managed to sell his socialist snake oil to many well-meaning, kind-hearted Americans who think that the only way to solve the world’s problems is to give government far more power over their lives.

The following quotes from Sanders illustrate just how truly radical and disturbing his ideology is.

Police departments are controlled by “fascists and Nazis”

In a “special interview” in 1981 with a communist newspaper called The Militant, Sanders, who had just become mayor of Burlington, Vt., claimed there are American police departments “dominated by fascists and Nazis.”

“We’ve got cops here who are good trade unionists on all the regular trade union issues, and who also have a concern for young people,” Sanders told The Militant, in reaction to some concerns voiced by socialists who were worried that he received too much support from local police during his 1980 mayoral campaign.

In other words, Burlington had good cops – but bad cops dominated many other police departments.

The attack Sanders made on police is not only outrageous, it’s also incredibly ironic. The Nazis were, in fact, socialists who believed in collectively managing property and most of the German economy.

Further, some of the most ruthless, murderous regimes to exist during the past 100 years were led by committed Marxists – not free-market capitalists devoted to defending individual rights. 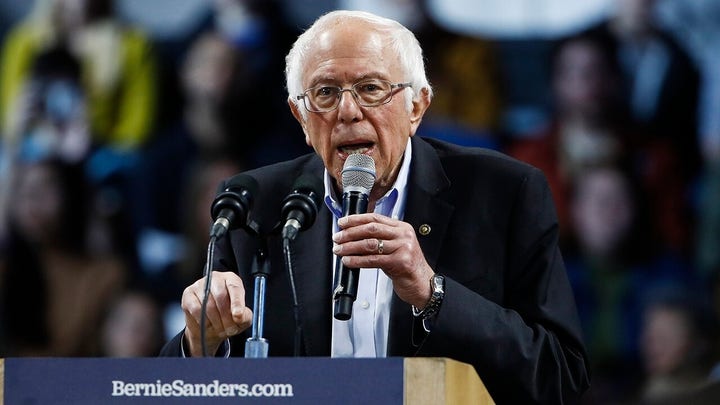 Support of communist organizations and Cuba

Sanders has a long track record of supporting communist and socialist organizations. For example, in 1980 and 1984, he endorsed Socialist Workers Party presidential candidates, and he even agreed to be an elector for the party. This shows clearly that Sanders is no Democrat. He’s an opportunistic radical trying to hijack the Democratic Party and turn it into a socialist party.

In the 1980s, the Socialist Workers Party was mostly devoted to espousing radical Marxist and communist ideas, and it was widely known as being largely Trotskyite – an ideology made famous by Russian revolutionary Leon Trotsky, who promoted the necessity of global communism.

According to an article in The Militant, Sanders issued a press release in 1980 in which he said he supported the Socialist Workers Party in part because of its “continued defense of the Cuban revolution.”

At the time Sanders lauded the “Cuban revolution,” the ruthless dictator Fidel Castro had been in power for two decades. During that period Castro stripped Cubans of their basic political and individual rights, murdered and imprisoned dissenters and welcomed Soviet missiles to his island nation. That action led to the Cuban Missile Crisis in 1962, which brought the U.S. and the Soviet Union to the brink of nuclear war.

A crusade against capitalism

Sanders has a long track record of framing his ideology as one that is completely contrary to capitalism. This precludes any possibility that he wants to merely reform America’s current market-based system.

For example, in a speech Sanders delivered in May 1981 while introducing the head of the Socialist Workers Party, he explained that the “real debate of our time” and the “debate of our century” is “socialism versus capitalism.”

Further, throughout the 1980s Sanders said the Democratic Party was not radical enough to accomplish his goal to usher in his Marxist utopia and win the “socialism versus capitalism” debate.

For instance, according to reports by the Burlington Free Press, in a speech Sanders delivered in the early 1980s before students at the Vermont Law School he said Vermont needed a new and radical party that “must develop a membership base of workers and farmers” and called for “the rejection of the Democratic and Republican parties.”

Based on his own words, it is clear that the “revolution” Sanders is always talking about staging would spell the end of capitalism and economic freedom in the United States that made us the richest, most prosperous and most powerful nation on Earth. And once economic freedom goes, history has shown that political freedom and many of our human rights go as well.

My question to each of you reading these words is simple: Do you really want to see America turned into a “workers’ paradise” like China, Russia, North Korea, Cuba, Venezuela and so many other failed communist and socialist nations?

Sanders doesn’t frame his campaign that way, of course. But that is the choice facing voters.