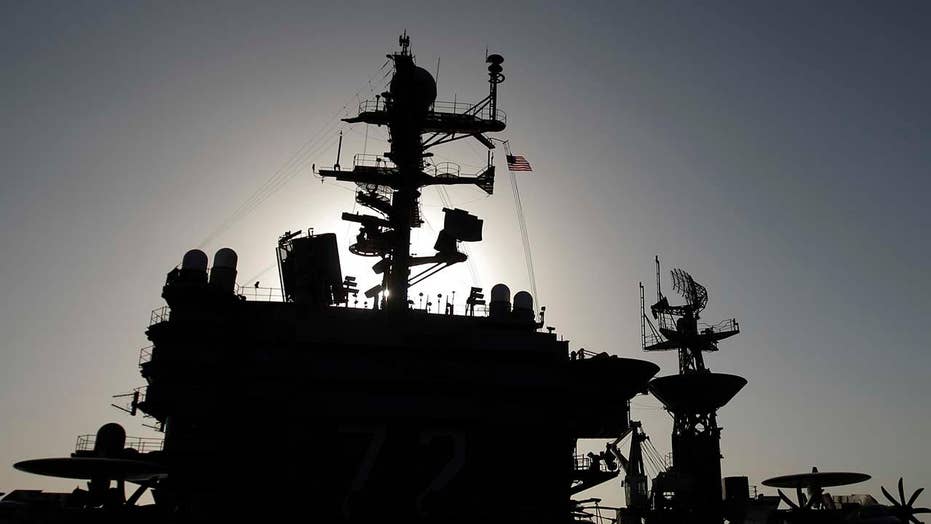 US sends warships to Mideast as warning to Iran

Secretary of State Mike Pompeo says Iran could be planning a possible attack on US forces in the Middle East; national security correspondent Jennifer Griffin reports from the Pentagon.

Soon after the White House announced Sunday that it was sending an aircraft carrier strike group and Air Force bombers to the Middle East, the Twittersphere erupted with anxious posts about whether the redeployment means that the U.S. is preparing to strike Iran. As evidence, critics have cited both the harsh tone of the message and the identity of the messenger.

The statement announcing the redeployment – military movements that are only rarely disclosed in advance – not only cautioned Iran that any Iranian-backed attack on American “interests or on those of our allies” in the region would be met by “unrelenting force,” it was delivered by National Security Adviser John R. Bolton, a known hawk who has pushed hard for aggressive action against the Islamic Republic.

Monday, officials said that the decision to deploy the U.S.S. Abraham Lincoln aircraft carrier was not preparation for a planned military strike against Tehran, but a response to intelligence indicating that the Iranian Revolutionary Guards Corps (IRGC), part of Iran’s military, might be planning to stage new attacks against the 5,200 U.S. troops in Iraq. For years, Iran and its proxies have helped train Shiite Arab militias which have repeatedly targeted and attacked American soldiers.

Iran, and the IRGC in particular, have intensified their search for ways to strike back at the United States ever since the administration designated the Guards as a terrorist organization. Washington’s action last month infuriated Tehran, as the designation has imposed stiff economic penalties against the group, making it more difficult for its members to buy arms and supplies and to travel.

The designation was controversial, even within the U.S., as Washington had never before applied the terrorist designation to part of another nation’s government. But the IRGC is not just any national military organization. The Pentagon, in another unusual announcement, has said that Iran-backed fighters are responsible for having killed at least 603 American soldiers and other personnel in Iraq, about 17 percent of Americans killed in hostile action there.

Though Bolton’s statement was tough, officials asserted Monday that it was directed not at provoking an armed conflict with Iran, but preventing one.

Iran has also become more desperate to retaliate as the Trump administration has ratcheted up economic pressure against the regime. Washington recently ended the waivers that permitted China, along with American allies such as Japan, India and South Korea, to continue buying Iranian oil, exports that account for roughly 80 percent of the Iranian government’s revenue.

In response to the designation and expanded sanctions, Iranian President Hassan Rouhani has signed a measure declaring all American forces in the Middle East terrorists and labeling the U.S. a state sponsor of terrorism. Plus, senior Iranian officials have warned that if the U.S. stops Iran from selling oil, Iran will find ways to ensure that Saudi Arabia and other western-oil suppliers in the region cannot export their own oil.

Such actions and other unspecified Iranian moves have led U.S. officials to fear more strikes against American forces and personnel in the region, as well as American allies. But U.S. officials have so far declined to describe the intelligence in detail or provide evidence indicating that the IRGC or other Iran-backed forces may be preparing such attacks in Iraq, where assigning blame for such strikes is difficult.  Hence, Trump administration critics are understandably skeptical.

President Trump and his team have made no secret of their opposition to the Iranian regime. It was only a year ago that the president made good on his controversial decision, opposed by many American allies, to withdraw from the Iranian nuclear deal negotiated by President Obama – a deal the Iranian regime continues to carefully adhere to for fear of alienating European and other American allies. But the president has told friends and officials in his administration that he does not want to provoke a war with Tehran.

So, what to make of this latest maneuver?

This is hardly the first time that an American administration has increased the U.S. military presence in the Mediterranean Sea and the Persian Gulf. Such groups are often there given the amount of oil that transits through its waters and the Suez Canal.

Though Bolton’s statement was tough, officials asserted Monday that it was directed not at provoking an armed conflict with Iran, but preventing one. American officials want to be clear that Iran will be held responsible for attacks on U.S. forces in the region and on those of its allies.

Those who oppose any unilateral American military action against Iran, myself included, can only hope that the message President Trump intended to send will be heard loud and clear, and not misinterpreted, by the Ayatollah.