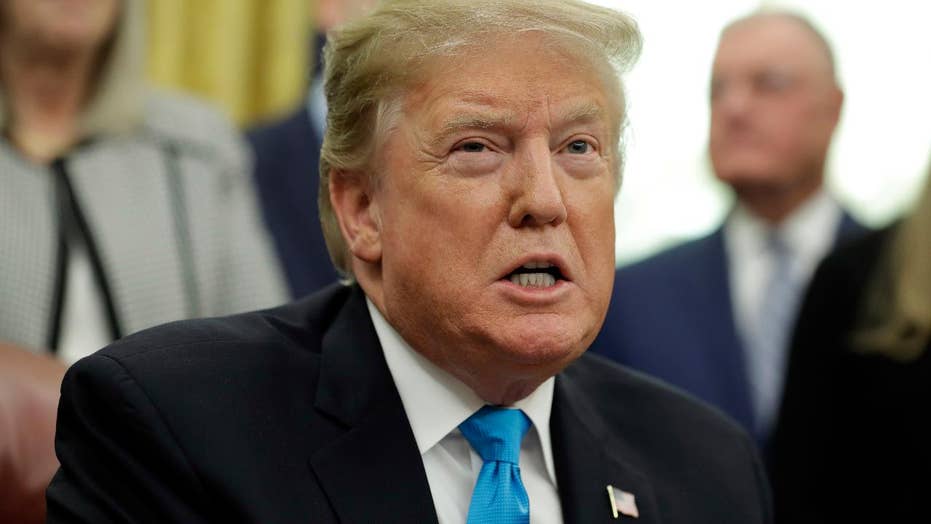 Judge Napolitano's Chambers: Judge Andrew Napolitano explains how President Trump's declaration of a national emergency to bypass Congress to get money for the border wall is unconstitutional.

In 2015, Trump began offering that as president, he would build a "big, beautiful wall" along the border of the United States and Mexico and that Mexico would pay for the wall. His stated purpose throughout the 2016 presidential campaign and beyond was that a wall is necessary to stop the onslaught of immigrants illegally entering the United States at places other than lawful ports of entry.

He also offered his personal view that many of the folks entering through these unapproved areas are gang members who are trafficking in drugs and human slavery.

After the president of Mexico rejected paying for a wall, Trump asked Congress to do so. Curiously, he did not ask for the wall payment during the first two years of his presidency -- when Republicans controlled both houses of Congress -- but waited until the Democrats, who largely oppose the wall, were in control of the House.

So determined has he been to build a wall -- any wall, so as to be able to assert that he has fulfilled a campaign promise -- that he has dropped his demand that Mexico pay for it, modified his demand that it even be a wall (because his own Border Patrol folks told him that a wall would impair their ability to observe behavior on the south side of it) and reduced the length of his proposed barrier from 1,000 miles to 55 miles. Congress still refused.

So determined has he been to build a barrier of any length that he rejected budgetary measures that had been passed by both the Republican Senate and the then-Republican House, and permitted about one-third of the federal government to shut down for 35 days at the end of 2018 and the beginning of 2019. During negotiations, he demanded $5.7 billion as a down payment for his $25 billion wall. Then, seeing the misery the shutdown caused, he relented and signed essentially the same spending legislation that had been passed before and that he had rejected, though it was only for three weeks. He continued to demand $5.7 billion, but all Congress would give him was $1.4 billion for border security, much of it not for a wall and none of it for where he wants to build.

After he signed the legislation with little money for the wall, he signed an executive order declaring a national emergency at the U.S.-Mexico border. He described the migrants there as being engaged in an "invasion," so he ordered the departments of Defense and Homeland Security to divert unspent appropriations, money authorized by Congress for other purposes, to building a wall.

Was it legal for him to do that? In a word: No. As my colleagues at The Wall Street Journal wrote last week: President Trump, meet Justice Jackson. Robert Jackson was the last attorney general of the United States and the last justice of the U.S. Supreme Court never to have graduated from law school. He was also a gifted jurist who played a pivotal role in a famous case in 1952.

In 1952, when American steelworkers went on strike and the U.S. military was fighting the Korean War, President Harry Truman asked Congress for the authority to occupy the steel mills and pay nonunion workers to replace the strikers. When Congress refused, Truman declared a state of emergency and directed his secretary of commerce, Charles Sawyer, to hire workers at federal expense to operate the mills.

When the mills' owners challenged Truman's order, a federal district judge enjoined the president from enforcing it, and the Supreme Court upheld the injunction. Youngstown Sheet & Tube v. Sawyer, known as the Steel Seizure Case, held that the president was without authority to occupy private property and pay others to do so without express appropriations from Congress because the Constitution defines clearly that no federal dollars can be spent without an appropriation by Congress.

Now, back to Justice Jackson. Rarely in Supreme Court history has a concurring opinion been cited and relied upon by future courts more than the majority opinion, but this case is the exception. In concurring with the majority on the court, Justice Jackson offered his now iconic views of the presidency vis-a-vis Congress under the Constitution.

When the president acts pursuant to authority granted to him by the Congress in an area of government delegated to him by the Constitution, his authority is at its peak, and he is free to exercise it as he sees fit. When he acts in an area as to which the Congress has been silent, he acts in a twilight zone and can succeed only if the area of his behavior is delegated to him under the Constitution and if he enjoys broad public support.

But when the president acts in an area that the Constitution gives exclusively to Congress -- such as spending money -- and when he acts in defiance of Congress, his acts are unconstitutional and are to be enjoined.

Years later, Justice Anthony Kennedy would explain that presidents cannot act as if they were Congress any more than Congress can act as if it were the president. They cannot constitutionally exchange roles voluntarily, much less by defiance. This underscores the separation of powers. It is the most integral unique aspect of our Constitution. James Madison argued that it preserves personal liberty by keeping both the president and the Congress in check -- even if it means they are sometimes at tension with each other.

President Trump's emergency declaration would be viable, though probably unsubstantiated factually, if it did not involve spending money. But by spending money not unauthorized by Congress, he has failed to uphold the Constitution, which he has sworn to preserve, protect and defend.