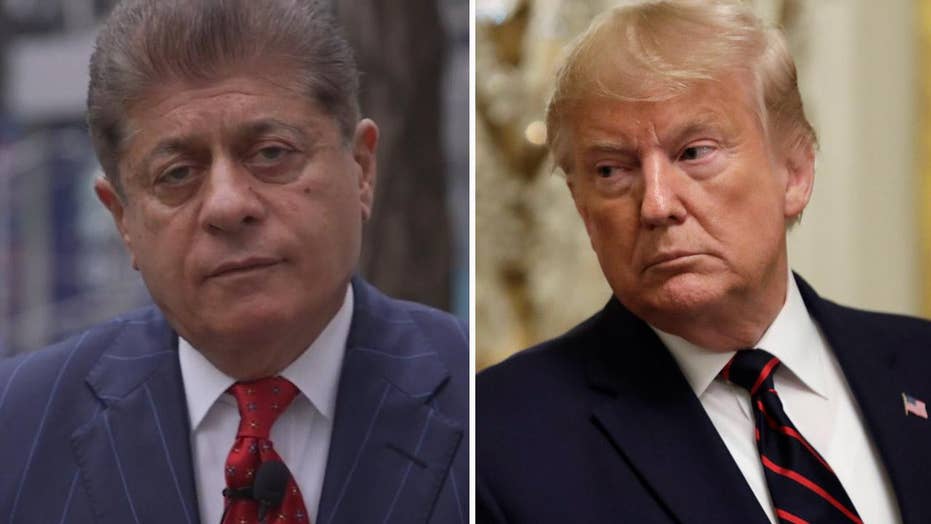 Judge Napolitano's Chambers: Judge Andrew Napolitano explains the Democrats' mounting evidence against President Trump and why he should present a principled defense if he has one.

The House of Representatives has begun to gather evidence in an effort to determine if President Trump has committed impeachable offenses. The Constitution defines an impeachable offense as "treason, bribery, or other high crimes and misdemeanors."

The president need not have committed a crime in order to be impeached, but he needs to have engaged in behavior that threatens the constitutional stability of the United States or the rule of law as we have come to know it.

Has Trump committed any impeachable offenses?

A CIA agent formerly assigned to the White House – and presently referred to as the "whistleblower" – reported a July 25, 2019 telephone conversation that Trump had with Ukraine’s President Volodymyr Zelensky. That conversation manifested both criminal and impeachable behavior.

The criminal behavior to which Trump has admitted is much more grave than anything alleged or unearthed by Special Counsel Robert Mueller, and much of what Mueller revealed was impeachable.

What has Trump admitted?

The whistleblower’s revelation caused the White House to release a near-verbatim summary of the conversation between the two presidents. By releasing it, Trump has admitted to its accuracy. In it, Trump asked Zelensky for dirt on former Vice President Joe Biden, who at this writing is Trump's likely Democratic opponent in the 2020 presidential election.

Trump also admits to holding up $391 million in aid to Ukraine – $250 million in the purchase of already approved and built military hardware and $141 million in a congressionally authorized grant. This is aid that Trump's own secretaries of state and defense, his own director of national intelligence and director of the CIA, and his own National Security Council unanimously asked him to release.

Trump has also admitted to accusing the as-yet publicly unnamed whistleblower of treason, and suggesting that the whistleblower and those who have helped him are spies and ought to be treated as spies were in "the old days" (Trump’s phrase) – that is, by hanging.

The president’s allusions to violence are palpably dangerous. They will give cover to crazies who crave violence, as other intemperate words of his have done. His words have already produced offers of "bounties" in return for outing and finding the whistleblower.

Trump also suggested that his impeachment would produce a second American Civil War. This language is a dog whistle to the deranged.

All of Trump's admissions need to be taken in context. In 2014 and 2015, Russian troops invaded Crimea, then a province of Ukraine. They took over government buildings and held a sham referendum, which had been declared unconstitutional under Ukrainian law by Ukrainian courts.

The troops dispersed the courts, and the Russian government annexed Crimea. What was a part of Ukraine five years ago today houses Russian troops and Russian tanks eyeing Kiev, Ukraine's capital.

It is easy to see why all of the senior members of the Trump administration involved in security –  all of them – advised the president to release the military hardware, which was ready to be shipped, and the foreign aid, which Congress had appropriated.

Trump rejected that advice. Instead, in the Zelensky phone call, he told the Ukrainian president that he needed a personal "favor." The clear unmistakable inference is that the $391 million in aid would be held up until the favor was delivered. The favor he sought was dirt on Biden.

Now, back to impeachment.

Federal law defines as criminal the solicitation of aid – anything of value – for a political campaign from a foreign national or foreign government, whether the thing of value arrives or not.

Federal law also prohibits bribery and attempted bribery, which is defined as withholding the performance of an official duty conditioned upon the personal receipt of a thing of value, whether the thing of value arrives or not.

The law further prohibits intimidating witnesses, which is defined as the use of language designed to deter witnesses from giving testimony, whether the intimidation is successful or not.

The whistleblower has also alleged that senior administration officials attempted to dissuade Trump from asking for the favor from Zelensky. The whistleblower’s sources relate – and reporting now reveals – that a debate took place in the White House before the telephone call was made.

Should the aid be held up? Should the president ask for dirt about Biden from his Ukrainian counterpart? If Biden did anything criminal, shouldn't the Justice Department get involved? Should the transcript of the Trump-Zelensky phone call be hidden? Was the president warned in advance that asking Zelensky for a personal campaign benefit could be criminal or impeachable? Does anyone in the White House tell the president what he doesn't want to hear?

Can the president put his own needs and wants above the nation's? In a word: No.

The president has taken an oath to enforce federal law, not break it. He cannot lawfully impose conditions – conditions that benefit him alone – as a prerequisite to compliance with the law.

Is violating campaign finance law by involving a foreign government in an American presidential campaign an impeachable offense? Yes, it is.

The expressed intention of those who wrote the Constitution and those who wrote the campaign finance laws 200 years later – and the lesson of the post-2016 election and Mueller-investigated angst in America – was to keep foreign governments out of the American political system.

It was to remedy just such reckless, constitutionally destructive behavior that impeachment was intended.