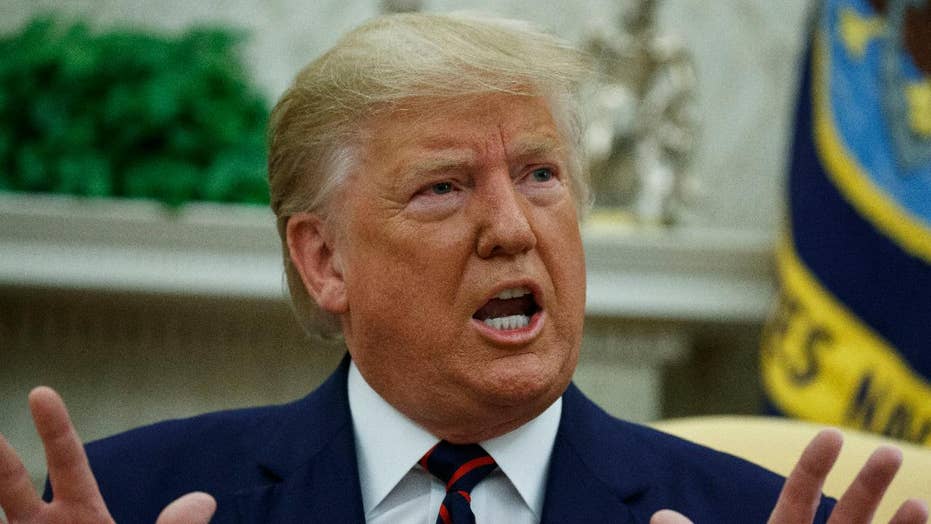 Trump says Schiff's parody of the Ukraine transcript should be 'treasonous'

President Trump calls for Rep. Adam Schiff's resignation after he read a parody version of the Trump-Ukraine call transcript during his opening statement before the House Intelligence Committee.

In my weekend column, I observed the media-Democrat complex’s politicized reporting of the July 25 conversation between President Trump and his Ukrainian counterpart:

Trump detractors hyper-focus on the president’s request that President [Volodymyr] Zelensky provide Attorney General [William] Barr with any information Ukraine might have about [former Vice President Joe] Biden twisting arms to quash an investigation involving his son’s cashing in on dad’s influence. I say “hyper-focus” because there was a lot more to it than that. Long before the conversation came around to the Biden topic, the "favor" that Trump asked for was Zelensky’s assistance in Barr’s ongoing investigation of the genesis of the Trump-Russia investigation.

Virtually all mainstream-media reporting and Democratic commentary on the conversation now fits this pattern. It is noted that Trump, immediately after the “quid pro quo” set-up — “I would like you to do us a favor though” — invoked the attorney general, the nation’s top federal law-enforcement official. Studiously omitted is the context of this invocation: a wholly appropriate request by the president, to the head of state of a country in possession of relevant evidence, for cooperation with a legitimate investigation being conducted by our country’s Justice Department.

Instead, the coverage skips a few hundred words. It cuts directly to Trump’s suggestion that Zelensky look into whether there was any impropriety Biden’s having purportedly “stopped the prosecution” that might have arisen out of a Ukrainian investigation involving his son.

The strategy here is obvious. Democrats and their note-takers would like the public to believe that Barr’s investigation is an adjunct of the Trump 2020 campaign — and a grossly improper one at that. The misimpression they seek to create is that Barr is putting the nation’s law-enforcement powers in the service of Trump’s reelection campaign, in the absence of any public interest. The hope is that this will delegitimize not only any information that emerges from Ukraine but the whole of the Justice Department’s investigation of intelligence and law-enforcement abuses of power attendant to the 2016 election.