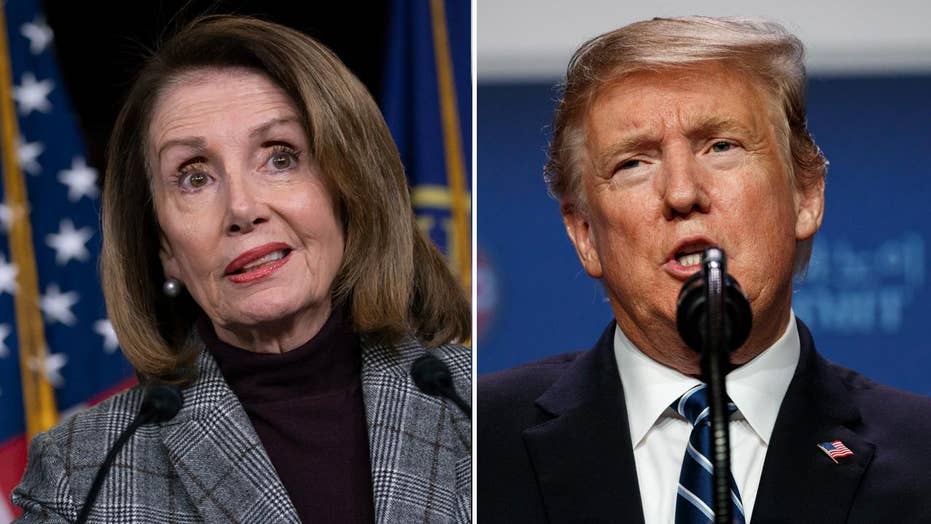 Earlier this week, House Speaker Nancy Pelosi told a group of supporters and journalists that in her view, gun violence is the real emergency. Such a statement, in the context in which she made it, should send shivers down the spines of all who believe in personal liberty protected by the Constitution.

Notwithstanding the terrifying analogy she made about gun violence -- terrifying to those who believe in the individual right to keep and bear arms as articulated by the Second Amendment and interpreted and upheld by the Supreme Court -- Pelosi wasn't really speaking about guns. She was speaking about the presidency and the Constitution.

When President Donald Trump finally signed legislation two weeks ago to keep the federal government financed and open -- legislation substantially similar to bills he had declined to sign in late 2018 and again in early 2019, bills that declined to give him the $5.7 billion he requested to build a wall at the southern border of the United States -- he also issued a proclamation declaring a national emergency at the southern border.

He based his emergency proclamation upon anecdotal evidence that more folks were attempting to enter the United States from Mexico than the Border Patrol and the southwestern states' safety nets could accommodate and that many of these would-be migrants were "bad people." He produced no evidence to back up his emergency claims. When 58 former high-ranking federal national security folks -- including a former Democratic secretary of state and a former Republican secretary of defense -- directly repudiated the president's stated basis for his emergency, the White House did not even respond.

As well, weeks before he signed the emergency proclamation, President Trump repeatedly offered that the threat of it was just a negotiating technique aimed at bringing House Democrats to the White House for a sit-down. And as he was announcing the proclamation itself, he boasted that he "didn't need to do this."

Trump's proclamation directed the departments of Defense and Homeland Security to divert unspent funds in their budgets -- funds directed to be spent on specified items by legislation passed by Congress and signed by former President Barack Obama and by President Trump himself but not yet spent -- to build a 55-mile stretch of what he says will be a 1,000-mile wall.

As I have written in this column and articulated on Fox News Channel, such executive action is unlawful, as it constitutes a presidential intrusion into an area of federal behavior -- spending money -- that the Constitution reposes exclusively in the Congress. In the famous Steel Seizure Case in 1952, when President Harry Truman ordered the employment of nonunion workers at government expense to run strike-closed steel mills after Congress declined to do so, the Supreme Court blocked him from doing just what President Trump is attempting to do -- spending money in defiance of Congress.

Though the 1976 statute interestingly fails to define just what constitutes a presidential emergency, the courts have concluded that it consists of the onset of a sudden and unanticipated event that demands government action to preserve life, liberty or property -- an event the ordinary levers of governmental power are insufficient to address. But it does not -- and constitutionally cannot -- authorize the president to spend money that Congress has expressly declined to spend.

Now, back to Speaker Pelosi and her comment about guns. Her constitutional argument (and I agree with her, which rarely happens) is that not only may the president not spend contrary to congressional wishes but also he cannot claim that his own declaration of a national emergency gives him another source for presidential power -- in this case, the ability to condemn private property and build a wall on it.

All presidential powers come only from the Constitution -- and from no other source. Were that not the case, were a president able to characterize any state of affairs as an emergency and thereby give to himself the lawful power to address it extraconstitutionally, that would do irreparable violence to the Constitution and would effectively transform the president into a prince.

You can see the wisdom of Pelosi's slippery-slope fear. If President Trump can get away with this, there will be no stopping his successors -- no matter who they are.

The Constitution's separation of powers -- Congress writes the laws, the president enforces them, the judiciary says what they mean; Congress declares war, the president wages war, the judiciary interprets the legal effects of war on domestic law -- was not established to fortify any of the three branches. It was crafted to keep each of those branches out of the business of the other two -- and thereby limit the reach of each branch and thus keep federal power separated and diffused.

The Framers knew that separated and diffused federal power would reduce the near occasions for interfering with the personal liberty of everyone in America. That's why it is integral to the Constitution.