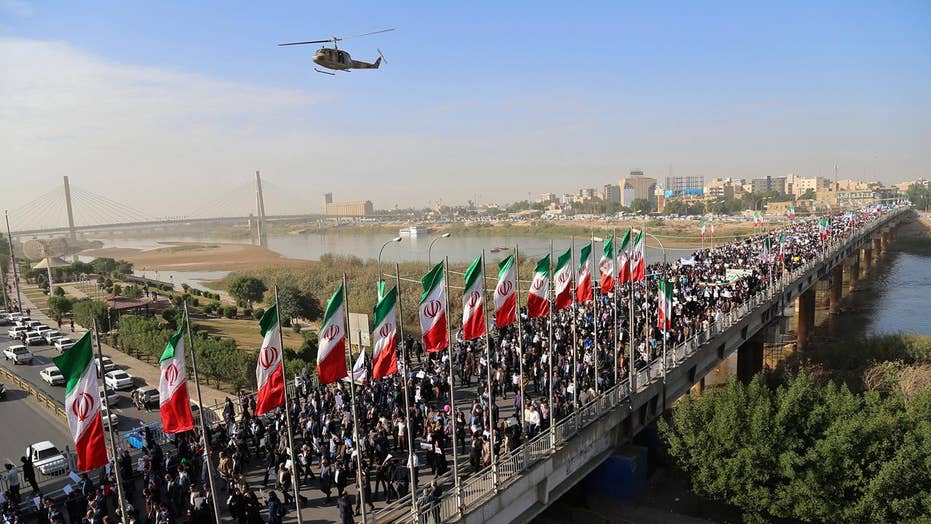 More sanctions on the Iranians was critically important: Joe Lieberman

Former Sen. Joe Lieberman, (I-Ct.), on the sanctions imposed on Iran and the exemptions the Trump administration gave some countries.

As the leaders of an organization called United Against Nuclear Iran, we are grateful for the bold change in America’s policy toward Iran that the Trump administration has implemented.

By withdrawing from the Joint Comprehensive Plan of Action (JCPOA) – commonly referred to as the Iran nuclear deal – last year, designating the Islamic Revolutionary Guard Corps (IRGC) as a Foreign Terrorist Organization this year, and steadily increasing U.S. sanctions to weaken Iran’s ability to perpetuate terror, Washington is leading with clarity and resolve.

POMPEO CANCELS LAST STOP OF TOUR AMID TENSIONS WITH IRAN

All of these steps were necessary. But there is more that can be done. To truly achieve “maximum pressure” on the regime, President Trump needs to make his sanctions airtight across Iran’s economy. This means plugging the sanctions gaps on the other critical pillar of Iran’s energy export-dependent economy: petrochemicals.

To truly achieve “maximum pressure” on the regime, President Trump needs to make his sanctions airtight across Iran’s economy.

The ongoing exports of Iranian-origin petrochemicals – like ammonia, methanol and urea – generate $13 billion annually in revenue for the regime. Petrochemicals are Iran’s second-largest export industry, and the IRGC is the second-biggest stakeholder after the Iranian government itself in Iranian petrochemicals.

A top official at the Iranian Gulf Petrochemical Industries Co. recently confirmed that it is significantly investing in developing the industry further, with Iran debuting two new plants last fall and planning to bring at least two more online later this spring.

Although the U.S. Treasury has a clear prohibition on “the purchase, acquisition, sale, transport, or marketing of petrochemical products from Iran,” a lot of companies are still operating under the misunderstanding that sanctions do not apply to petrochemicals.

According to multiple reports in specialized petrochemicals, fertilizer and shipping trade publications, there are large quantities of petrochemicals of Iranian origin currently on the global market.

This appears to be giving a green light to the ongoing trading of Iranian petrochemicals – whether intentionally or unintentionally evading sanctions – particularly to the countries that have been exempt from oil sanctions.

For example, in December 2018, ICIS – the world’s largest petrochemical market information provider – reported: “China urea producers are understood to have written to the state customs department to stop the re-export of Iranian urea from China. There has been talk of the certificate of origin of the cargoes being shown to be Chinese instead of Iranian to avoid US sanctions.”

In the same month, BMO Capital Markets noted: “Chinese (urea) producers have raised concerns that as much as ~1Mt of urea exports in 2018 actually originated as re-exports from Iran.”

At present, there is confusion about whether or not petrochemicals are covered under U.S. sanctions, and that is easily exploited. This must be addressed. President Trump should resolve the uncertainty by directing the Treasury Department to clarify, expand and clearly restate the ban.

This is critical. Petrochemicals are used in thousands of products from plastic and rubber to fertilizers and cosmetics. Iran could launder petrochemicals through trade channels in different forms unless Washington comes down harder and clearer on petrochemicals trading.

Iranian regime officials know this loophole exists and there is evidence suggesting that companies are actively trading in Iranian petrochemicals in these different forms.

The U.S. must also provide companies with more information about the ways in which Iranian petrochemicals are flowing through the global economy so they can better defend against the products entering into their supply chains and opening them up to secondary sanctions.

Presently, only 11 of Iran’s 81 petrochemical companies are sanctioned by the Office of Foreign Assets Control. Like each one of Iran’s oil tanker fleet, OFAC must specifically list the remaining 70 companies as sanctioned entities so as to provide no room for equivocation or error.

Then the Trump administration can punish countries and companies that continue to trade in the rogue regime’s petrochemicals.

Loopholes and unenforced sanctions equate to revenue for Tehran that is used to finance terror groups, such as Hezbollah in Syria, Hamas in Gaza and the Houthis in Yemen.

The U.S. is making a major contribution to our security and world security by leading the fight in the global community to end the campaign of destruction by the world’s leading state sponsor of terrorism.

For this, we thank President Trump, Secretary of State Mike Pompeo and National Security Adviser John Bolton and urge them to extend their campaign of “maximum pressure” against Iran to petrochemicals.

Mark D. Wallace, a former U.S. ambassador to the United Nations for management and reform, is UANI’s chief executive.

Joseph Lieberman is chairman of United Against Nuclear Iran (UANI). He was the Democratic vice-presidential nominee in 2000 and a U.S. senator from Connecticut, 1989-2013.