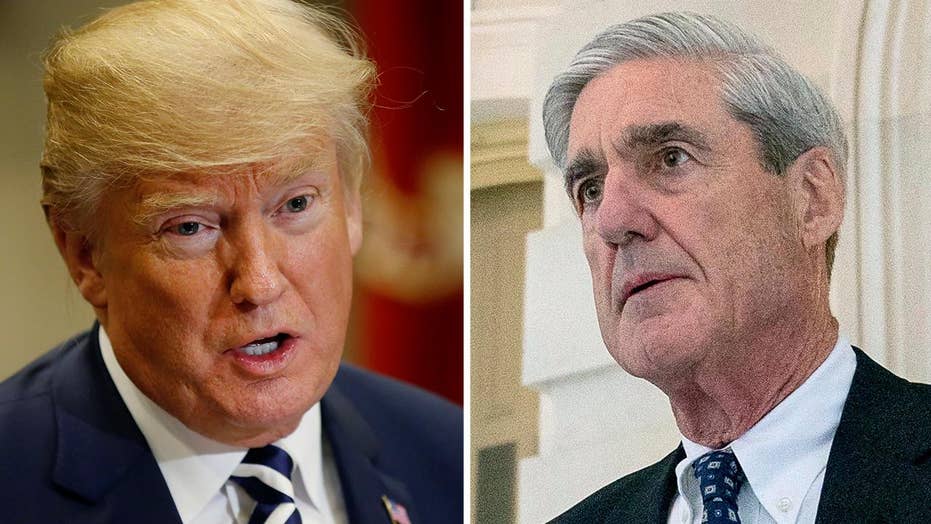 The president's criticism raises speculation that he may seek to have the special counsel fired; chief White House correspondent John Roberts reports.

President Trump is finally bringing in a first-string legal team to deal with Special Counsel Robert Mueller’s inquiry into Russian meddling into the 2016 presidential election and possible “collusion” between the Trump campaign and Russia.

The president, who has often stated that there has been “no collusion,” has hired Joseph diGenova and diGenova’s law partner and wife Victoria Toensing to join his outside legal team.

DiGenova served as the chief federal prosecutor in Washington, D.C., during the Reagan years and was an independent counsel at the end of the George H.W. Bush’s term. He has also appeared frequently as a guest on Fox News programs.

Toensing is a former assistant U.S. attorney and was a former deputy assistant attorney general during the Reagan administration.

President Trump also reportedly tried unsuccessfully to hire Theodore B. Olson, who represented the George W. Bush administration before the Supreme Court and successfully defeated an independent counsel investigation into his own service in the Reagan administration.

While certainly colorful, Trump’s defense team until now could not boast veterans of the unique combination of criminal law and constitutional politics demanded by independent counsel investigations, especially those into the president.

President Trump’s lawyers seemed almost to be part and parcel of the circus-like atmosphere that has pervaded the White House. But just as the president eventually replaced provocateurs such as Steve Bannon with seasoned professional manager like White House Chief of Staff John Kelly, he is now upgrading his legal team. It is as if the Golden State Warriors are subbing in for a college basketball team.

According to media reports, President Trump’s defense team became deeply split over whether the president should submit to an interview with Mueller and his prosecutors. While Trump affirmed Thursday that he would “like to” answer Mueller’s questions, Dowd apparently believed that the president’s lack of discipline and tendency to go off script could leave him vulnerable to perjury charges.

On this score, President Trump should trust his instincts. While his old legal team might have provided good advice for a regular criminal case, Mueller’s investigation is no normal investigation.

The Constitution gives the president the responsibility to “take care that the laws are faithfully executed.” It also makes the president the nation’s chief law enforcement officer. Because of this, the president should not be put in the position of openly evading and frustrating a legitimate federal investigation. Doing this would undermine the cause of federal justice.

It’s important to note that in addition to seeking to indict White House and campaign aides, Mueller could also recommend that Congress impeach President Trump – an option that does not require the commission of a crime alone.

Hiding behind executive privilege would fail to deter Mueller and would also set back the privilege for future presidents who would truly need to invoke it. Defenders of presidential prerogatives should worry that a claim by President Trump of secrecy would ultimately weaken the privilege.

While some media reports have credited President George Washington with first invoking the right to withhold confidential talks from Congress and the courts, the real credit for first invoking executive privilege goes to President Thomas Jefferson,

President Jefferson ordered the prosecution of his former vice president, Aaron Burr, on a charge of treason for raising a rebellion in Louisiana. But Burr claimed that Jefferson had blessed his plans and demanded military reports to prove his innocence – much as the Watergate burglars 170 years later would claim that President Nixon had authorized their crimes. Chief Justice John Marshall, sitting as the trial judge, obliged with a subpoena for the military reports.

President Jefferson considered ignoring Marshall, who was his second cousin. But instead, Jefferson argued that presidents could withhold evidence because the Constitution does not allow any branch of the federal government to force its will on the others.

President Jefferson wrote: “The intention of the Constitution, that each branch should be independent of the others, is further manifested by the means it has furnished to each, to protect itself from enterprises of force attempted on them by the others.”

Jefferson’s point was that just as the president could not force the Supreme Court to adopt his view of the Constitution, John Marshall could not impose his opinions on the president. Still, the president ultimately provided some documents for the trial and Burr was acquitted.

Ever since, presidents of both parties – including Dwight Eisenhower, Bill Clinton, George W. Bush and Barack Obama – have invoked executive privilege. In United States v. Nixon (1974), the Supreme Court endorsed such presidential claims.

“Human experience teaches that those who expect public dissemination of their remarks may well temper candor with a concern for appearances and for their own interests to the detriment of the decisionmaking process,” Chief Justice Warren Burger wrote for a unanimous court. He accepted that in the role commander-in-chief of the armed forces and in dealing with foreign affairs the president could demand an absolute privilege “to protect military, diplomatic, or sensitive national security secrets.”

But the Supreme Court rejected President Nixon’s claim to decide for himself whether the privilege applied. In the case of the Watergate burglars, the right to a fair trial should prevail over any claim to confidentiality in executive branch discussions, the high court ruled.

“The impediment that an absolute, unqualified privilege would place in the way of the primary constitutional duty of the Judicial Branch to do justice in criminal prosecutions would plainly conflict with the function of the courts under Art. III” of the Constitution, Burger wrote. The court concluded that the judiciary could force the president to hand over documents and tapes needed by the Watergate special prosecutor.

If Mueller obtains a court subpoena, therefore, President Trump would have to turn over documents and even testify under oath, unless he invoked the protection against self-incrimination provided to all Americans by the Fifth Amendment of the Constitution – a move that could prove to be politically disastrous. But the president could not hide behind executive privilege.

If President Trump refuses to testify he will only waste precious time delaying Mueller from getting the information he wants. Instead, the president should cooperate and even testify, for it is only Mueller who can credibly clear the Trump campaign of allegations of conspiring with Russia.

The president would display an unexpected wisdom if he conserves the presidential power of executive privilege for coming crises that will truly demand it.