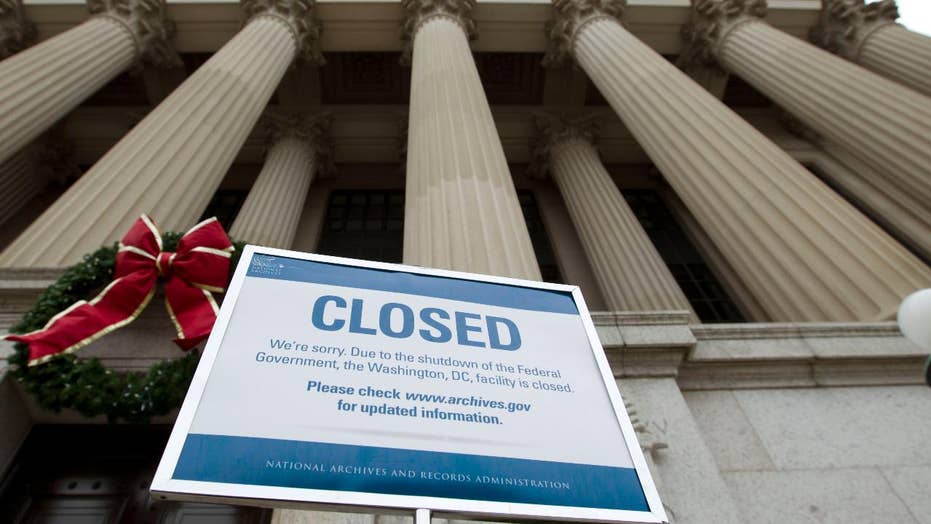 As the government shutdown continues, some government workers are applying for unemployment to cover cost of living

Bryan Llenas reports on the impact that the government shutdown has made so far as it enters day 16 of the shutdown.

This government shutdown is now longer than any in history. The media keep using the word “crisis.”

The New York Times headlined, it’s all “just too much!”

CLICK HERE TO READ MORE ON THE GOVERNMENT SHUTDOWN

But wait. Looking around America, I see people going about their business -- families eating in restaurants, employees going to work, children playing in playgrounds, etc. I have to ask: Where’s the crisis?

Pundits talk as if government is the most important part of America, but it isn’t.

Of course, the shutdown is a big deal to the 800,000 people who aren’t being paid. But they will get paid. Government workers always do -- after shutdowns.

During shutdowns, government tells “nonessential workers” not to come to work. But if they’re nonessential, then why do we pay 400,000 of them?

But there are lessons to be learned.

During a shutdown when Barack Obama was president, government officials were so eager to make a point by inconveniencing people that they even stopped visitors from entering public parks.

But volunteers appeared to pick up some of the trash.

Given a chance, private citizens often step in to do things government says only government can do.

But why do farmers even get “support checks”?

One justification is “saving family farms.” But the money goes to big farms.

Government doesn’t need to “guarantee the food supply,” another justification for subsidies. Most fruit and vegetable farmers get no subsidies, yet there are no shortages of peaches, plums, green beans, etc.

Subsidies are a scam created by politicians who get money from wheat, cotton, corn and soybean agribusinesses. Those farmers should suck it up and live without subsidies, too.

During shutdowns, government tells “nonessential workers” not to come to work. But if they’re nonessential, then why do we pay 400,000 of them?

Why do we still pay 100,000 American soldiers in Germany, Japan, Italy and England? Didn’t we win those wars?

We could take a chainsaw to so much of government.

Only if you read on do you learn that meat and poultry inspection is done by the Department of Agriculture. They’re still working. And the FDA is restarting some inspections as well.

More important, meat is usually safe not because of government -- but because of competition.

Food sellers worry about their reputations. They know they’ll get bad publicity if they poison people (think Chipotle), so they take many more safety measures than government requires.

One meat producer told me that they employ 2,000 more safety inspectors than the law demands.

Lazy reporters cover politicians. Interviewees are usually in one place -- often Washington, D.C. Interviewing politicians is easier than covering people pursuing their own interests all over America. But those are the people who make America work.

While pundits and politicians act as if everything needs government intervention, the opposite is true.

Even security work is done better by the private sector. At San Francisco’s airport, security lines move faster. Passengers told me, “The screeners are nicer!” The TSA even acknowledged that those screeners are better at finding contraband. That’s because San Francisco (Kansas City, Seattle and a dozen smaller airports) privatized the screening process. Private companies are responsible for security.

Private contractors are better because they must compete. Perform badly, and they get fired.

But government never fires itself.

Government workers shout, “We are essential!” But I say: “Give me a break. Most of you are not.”