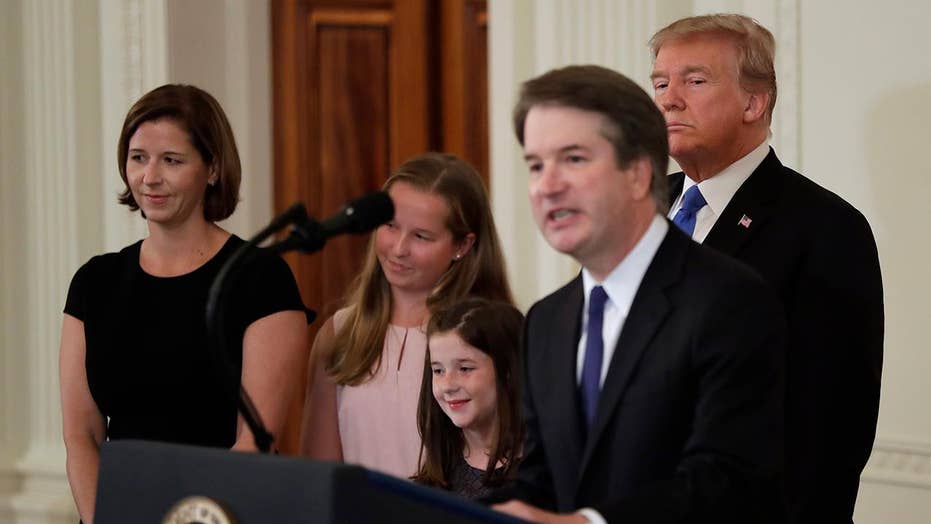 You could almost hear liberals gnash their teeth Monday night as President Trump nominated Judge Brett Kavanaugh to the Supreme Court. They know they have almost no chance of preventing his confirmation.

Kavanaugh is widely liked in Washington legal circles. He gave a humanizing introductory speech after the president introduced him at a White House ceremony.

The judge has impeccable educational qualifications and already serves on the powerful U.S. Circuit Court of Appeals for the District of Columbia. He is even respected by liberals such as Supreme Court Justice Elena Kagan, who hired him to teach at Harvard Law School before she joined the high court.

Democrats were worried about the danger of having Kavanaugh on a track to the Supreme Court back in 2003 when he was appointed by President George W. Bush to the D.C. federal circuit court. They blocked a vote on his confirmation for three years, and only four Democrats ultimately voted for him.

Senate Minority Whip Dick Durbin, D-Ill., made his concerns public at Kavanaugh’s 2006 confirmation hearing when he told the nominee: “As I look through all of the different issues that you have been involved in as an attorney in public service and the private sector, it seems that you are the Zelig or Forrest Gump of Republican politics. You show up at every scene of the
crime. You are somehow or another deeply involved, whether it is Elian Gonzalez or the Starr Report, you are there.”

Durbin and his liberal colleagues know there is only one narrow path to stopping Kavanaugh.

Right now, the question isn’t if Kavanaugh is likely to be confirmed, but how many Democrats will find themselves torn between the left wing of their party and political reality.

First, Democratic leaders must convince all of the 10 Democratic senators up for re-election in November in states that Donald Trump carried in the 2016 presidential election to oppose his Supreme Court nominee, even at the risk of alienating their constituents.

Of these 10 Democratic senators, the most likely to vote to confirm Kavanaugh are Heidi Heitkamp of North Dakota, Joe Donnelly of Indiana and Joe Manchin of West Virginia. All voted in favor of President Trump’s nomination of Neil Gorsuch to the Supreme Court last year.

In what could be dubbed Project Fear, Democrats who want Collins and Murkowski to join them in opposing Kavanaugh’s confirmation will claim the judge will vote to overturn Roe v. Wade – the 1973 decision that legalized abortion nationwide – and will say that Kavanaugh will end ObamaCare.

Both Senators Collins and Murkowski have stated they would have trouble voting for a nominee who has indicated the intention to overturn Roe v. Wade. They also joined Sen. John McCain, R- Ariz., in derailing the GOP’s effort to replace ObamaCare in 2017.

McCain, who is ill with brain cancer back in Arizona, is unlikely to be able to return to Washington to vote on Kavanaugh’s confirmation.

But I don’t believe there is a realistic chance – absent the revelation of a personal scandal or an unlikely verbal mistake by Kavanaugh – that either Collins or Murkowski will vote against him. Both senators have voted for all of President Trump’s judicial nominees and overall they have backed the Trump legislative agenda: 80 percent of the time for Collins and 84 percent of the time for Murkowski.

Then there is the issue of political survival. As reporter Perry Bacon points out in FiveThirtyEight: “Such a vote would virtually guarantee that the offending GOP senator would face a primary challenge in their next election – and likely a challenge with strong support from the party base.”

Both Collins and Murkowski have reason to worry on that front. In 2010, Murkowski actually lost her Republican primary in Alaska to tea party insurgent Joe Miller.

It was only through an effort worthy of Hercules that the party establishment was able to take advantage of Miller’s rookie mistakes in the general election and re-elect Murkowski on the basis of write-in votes. That establishment support would be absent for Murkowski if she were to break with her party on such a high-profile vote as Kavanaugh.

And voter suspicion about Murkowski is still present in Alaska.

Running for re-election in 2016 against a hapless Democrat and against Miller (running as a Libertarian this time), Murkowski was only able to defeat her underfunded third-party challenger by 44 percent to 29 percent. The Democratic candidate for the Senate seat from Alaska got only 12 percent of the vote. Changing parties after voting against Kavanaugh would not be an option for Murkowski.

The situation is similar for Susan Collins in Maine. Despite being in New England, Maine is not a liberal state. It has elected conservative Gov. Paul LePage twice and the GOP controls one of its two legislative chambers.

In 2016, Hillary Clinton narrowly won the state 48 percent to 45 percent for Trump, but if you added Libertarian Gary Johnson’s 5 percent to Trump’s total, Clinton’s performance was anemic.

Collins knows that were she to vote against Kavanaugh she would face a bitter inter-party challenge in 2020, and in a closed primary in which only Republicans can vote.

“Politically for Susan … it’s very hazardous right now for her to take on President Trump,” former Rhode Island Senator Lincoln Chafee, a former Republican who has become a Democrat, told the Boston Globe. “Maine has its strong Trump core. Even if they’re pro-choice I think in this environment many of these people just want to blindly support President Trump, and any deviation from his agenda can be hazardous and invite a primary challenge.”

These factors make it unlikely that Democrats can peel away either GOP senator to oppose Kavanaugh’s nomination. If they fail they will have to worry that several of their vulnerable incumbents up for re-election in November will vote for Kavanaugh’s confirmation so they can bolster their credentials as moderates.

Right now, the question isn’t if Kavanaugh is likely to be confirmed, but how many Democrats will find themselves torn between the left wing of their party and political reality.