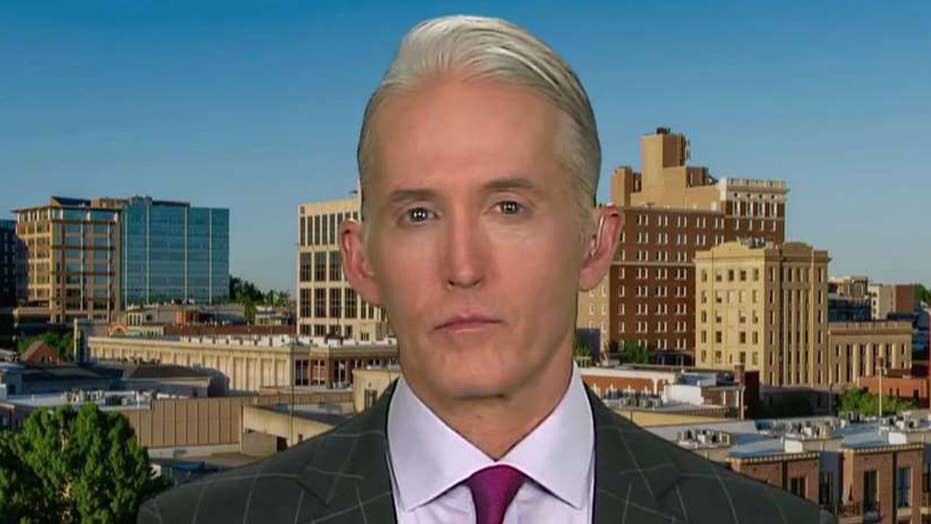 Gowdy: If Burr is sending a subpoena, private negotiations must have failed

If you’re confused as to why Senate Intelligence Committee Chairman Richard Burr, R-N.C.,  joined forces with Democrats to drag Donald Trump Jr. in for another round of questioning after he had previously given nearly 27 hours of congressional testimony, you aren’t alone.

Of course, President Trump’s son isn’t even a politician, a public official, or tangentially involved in the workings of the government. He is a private citizen whose main involvement in public life is supporting his father and the America First political agenda that’s creating a record number of jobs across the country.

The subpoena is especially troubling because the justification for it isn’t some newly unearthed “bombshell” criminal allegation. Nor is it Congress’s oversight authority.

No, Burr and his buddy, Sen. Mark Warner, D-Va., are calling Don Jr. back before them for a political spectacle, likely on national television, for one reason and one reason only: the word of a convicted liar, Michael Cohen, who is President Trump’s former personal attorney.

Cohen, who reported to prison this month, was convicted and disbarred for lying to banks for his own personal gain and then lying to Congress. After that, someone lied to BuzzFeed about the president telling Cohen to lie. Following that, Cohen repeatedly lied to Congress again when Democrats invited him in to give his very public mea culpa.

Even as he was heading to prison, Cohen couldn’t resist the spotlight and trying to further slander the president and his family.

It’s based on Cohen’s word that the Democrats want a second crack at Donald Trump Jr., who has already been cleared of all criminal wrongdoing by Special Counsel Robert Mueller following an intensive nearly two-year investigation.

The hearing clearly not about getting to the bottom of Russian interference in the 2016 U.S. presidential election – a red herring that the Trump administration’s political enemies have shamelessly exploited for years.

Given that the Mueller report completely debunked the entire Russia-Trump campaign collusion conspiracy theory as well, it’s unclear what legitimate legislative purpose there could possibly be for a calling the president’s son to testify at a public hearing.

The hearing clearly not about getting to the bottom of Russian interference in the 2016 U.S. presidential election – a red herring that the Trump administration’s political enemies have shamelessly exploited for years.

Even if we are to take every word Michael Cohen says at face value, there’s hardly a compelling reason to believe that the Senate Intelligence Committee is going after any real wrongdoing.

Don Jr.’s original response that he was “peripherally aware” of the Trump Tower Moscow project, which Cohen claims to have briefed him on, is nowhere close to meeting the definition of perjury for even the most aggressive prosecutor.

The much more obvious motivation is Don Jr.’s role on the political stage. Over the past few years, conservatives, American nationalists, and heartland populists in the Trump base have come to know the president’s son as a champion for the cause. Using the platform they gave him when they voted for his father, Don Jr. never stops advocating for their interests.

That is the unforgivable sin that has Democrats looking to drag the president’s son before the Senate Intelligence Committee again – not mumblings about the Trump Tower meeting, or Trump Tower Moscow, or even Michael Cohen’s self-serving claims.

The primary purpose here is simply to discredit Donald Trump Jr., taint his populist politics, and keep the always ill-defined shadow of scandal hanging over President Trump, his family, and his agenda.

This is all only more apparent in light of the fact that there is an easy and obvious compromise here that Burr and the Democrats on his committee are refusing to consider.

Donald Trump Jr. is more than willing to answer any specific questions arising from Cohen’s dubious testimony in the form of interrogatories – written questions that he could fill out in detail with the advice of legal counsel and speedily provide to the Senate Intelligence Committee.

This subpoena is not about answers, it’s not about justice, and it certainly isn’t how a private citizen should expect to be treated by Congress. This subpoena is simply an opportunity for another exercise in political theater predicated on the word of a convicted liar.

Sen. Burr shouldn’t have gone along with this charade in the first place. At most, the committee should take Don Jr.’s answers in writing, just as it should for any similarly situated private citizen who hadn’t been made into a political football.