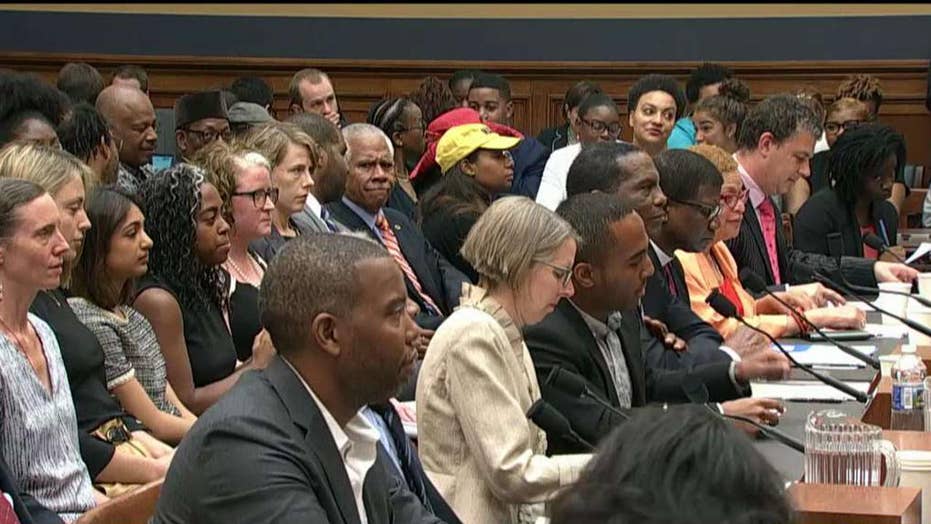 Reparations discussed on Capitol Hill for the first time in more than a decade; Ellison Barber reports from Washington

Republicans expressed outrage Wednesday –  a holiday known as Juneteenth that celebrates the abolition of slavery – about a reasonable proposal by House Democrats to create a commission to study some form of compensation for the descendants of Africans who were enslaved.

The disgraceful failure of the U.S. government to at least examine the issue of such reparations until now for the descendants of people who were treated like animals and denied the most basic human rights long ago is no excuse to continue ignoring the issue.

While justice and morality cry out for some way of compensating the descendants of enslaved Africans for their horrific treatment, their economic exploitation is something that is potentially quantifiable. Just because slavery ended in 1865 is no excuse to dismiss the rightful claims of descendants of enslaved people for justice, even at this late date.

In fact, in 1865 reparations almost happened. Union General William T. Sherman wanted to give 400,000 acres of coastal land to former slaves, and issued an order called Special Field Order No.15 to accomplish the task. But less than a year later, following the assassination of President Abraham Lincoln, President Andrew Johnson canceled Sherman’s order.

Rep. John Conyers, D-Mich., introduced legislation titled the Commission to Study and Develop Reparation Proposals for African-Americans Act in 1989 and kept introducing it for almost 30 years. The same bill is now sponsored by Rep. Sheila Jackson Lee, D-Texas, and was the subject of a hearing Wednesday by the House Judiciary Committee.

It’s important to remember that while slavery is long gone, blatant and legal discrimination against African-Americans continued well into the 20th century and more subtle discrimination remains a fact of life today. And no one can deny that black American lag far behind whites in terms of wealth, homeownership, educational attainment and many other factors.

These gaps did not arise due to moral failings or lack of ambition among black people, but because the legacy of slavery and severe racial discrimination remains with us even today.

It’s important to remember that while slavery is long gone, blatant and legal discrimination against African-Americans continued well into the 20th century and more subtle discrimination remains a fact of life today

Slavery was a moral stain on America that time cannot wash away, no matter how hard some people try to forget it and brush it off as ancient history irrelevant to today.

The hundreds of years that slavery was legal were the most atrocious, wicked, and shameful period in our country’s history – endorsing the most damaging and humiliating acts imaginable.

Human beings were auctioned like cattle, beaten, separated from their loved ones and sexually exploited and raped.

The words of the Declaration of Independence – a beautiful document praising human rights – did not apply to black people. Imagine yourself an enslaved person hearing these words in 1776:  “We hold these truths to be self-evident, that all men are created equal, that they are endowed by their Creator with certain unalienable Rights, that among these are Life, Liberty and the pursuit of Happiness.” How would you have felt knowing you were excluded from these rights?

There is no way for our country to make up or compensate for the emotional and physical horrors visited upon the enslaved. However, the basis of the entire system of slavery was capitalism. We can at least study and discuss the economic element and see if some form of compensation is feasible for those affected by its legacy.

There are many misunderstandings about reparations. Many people believe that no one was compensated when slavery ended, but that’s not true. In Washington – where the debate over the study of reparations is now taking place – Congress passed a bill in 1862 to provide slaveholders $300 per slave (roughly $6,100 today) for their loss of “property.”

What about compensation for those who had been held as property? Forget about it – they got nothing.

The commission proposed in the bill by Rep. Sheila Jackson Lee is a sound and fair idea. Her legislation does not determine whether there would be compensation for the descendants of slaves, how much would be paid, or whether payments would be made to individuals or be in the form of programs designed to level the playing field to create equal opportunities for African-Americans.

If we truly believe in “America First,” why wouldn’t we compensate our own citizens who have been held back by racism for hundreds of years?

Have things gotten better over the years? Of course they have. Racial discrimination is no longer legal – but it would be naive to say it no longer exists.

Senate Majority Leader Mitch McConnell, R-Ky., dismissed the need for reparations to the descendants of enslaved people in comments to reporters Tuesday.

However, McConnell ignores the fact that corporations that benefited and built enormous wealth from the institution of slavery still exist. These companies include New York Life, JP Morgan Chase, Fleet Bank (which merged with Bank of America in 2004) and CSX. All have links to the slave trade.

Many major universities – including the University of Maryland, which I love and have devoted the last 25 years of my life to – used slave labor long ago. The vestiges of slavery are all around us.

McConnell was alive when the flagship university in his home state of Kentucky was a segregated institution, Born in Alabama, he was a teenager when a quiet and dignified woman named Autherine Lucy caused a riot by simply attempting to attend the University of Alabama.

While some argue that they should not be taxed for something they were not directly involved in, they need to take a refresher course on how taxes work.

In the end, all that is being requested in the legislation before the House is further inquiry. If simply inquiring into how to build a more equitable society for people of color is met with such a negative response from Republicans, perhaps we haven’t come as far as some think we have.