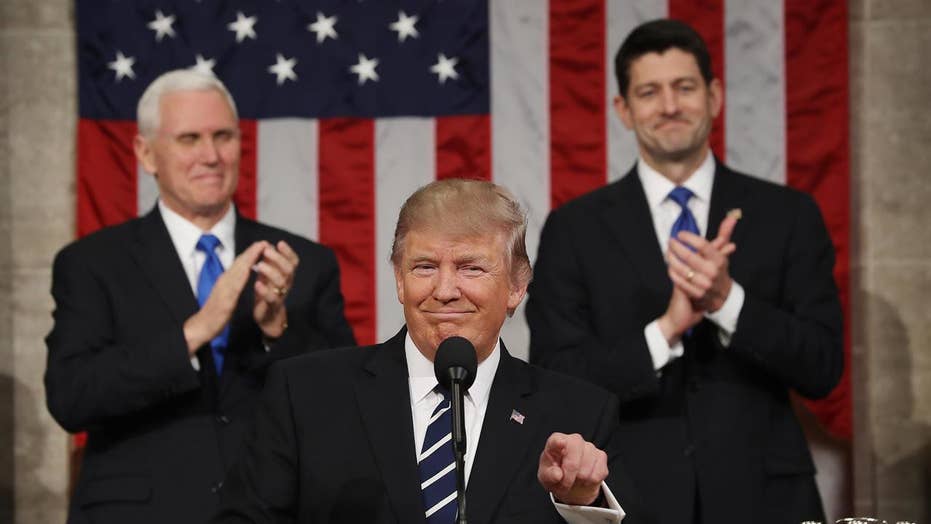 In Donald Trump’s first address to a joint session of Congress on Tuesday night, the president delivered the speech that many anticipated he would.

Trump played to familiar themes from the campaign trail that continue to energize his base, but still failed to build the consensus he needs to accomplish a national legislative agenda.

Despite numerous controversies and few accomplishments to date, Trump described his month-long presidential tenure as a success.

The president remarked that the stock market “gained almost three trillion dollars in value since the election on November 8, a record” and also that “we’ve saved taxpayers hundreds of millions of dollars by bringing down the price of the fantastic new F-35 jet fighter, and will be saving billions more dollars on contracts all across our government.”

In addition, Trump often eschewed speaking directly to the legislative chamber and instead, he spoke to the American people.

In this regard, Trump struck his uniquely populist chord, proclaiming that “a new chapter of American Greatness is now beginning” and, above all, his administration “will keep our promises to the American people.”

However, after spending his first forty days handing down a series of unilateral executive actions and few detailed policy proposals, Trump must now work with leaders of both parties in Congress to achieve his campaign promises.

In recent days, reports from the White House have indicated the time may be right for an immigration bill, provided there is compromise on both sides.

Yet in his address to Congress, Trump failed to promote such compromise. With Trump giving no credence to Democratic positions on immigration, while also recommending massive overhauls to key Democratic fixtures of the health care system, few reforms will be possible.

In the Senate alone, it is clear Trump has yet to forge broad enough support to accomplish anything other than through the narrowest budget reconciliations.

In the area of infrastructure investment as well, a traditional Democratic economic stimulus project, Trump was hardly able to cajole applause from the left side of the aisle during his address.

That must change in the coming months and this must be an issue area where Trump can find an opportunity to cooperate with Democrats, as it will also clearly do well to expand his base.

Beyond Trump’s address alone, recent public polling underscores that cooperation with Democrats is a key to expanding the president’s base.

The latest Wall Street Journal/NBC News poll shows that while Trump suffers from both negative job approval and favorability ratings, there is growing optimism about the economy generally and more importantly, majority support for Trump among a critical group of moderate voters.

In particular, 55 percent of individuals who voted for a third-party candidate, didn’t vote at all, or voted for Donald Trump mostly to oppose Hillary Clinton approve of Trump at this stage in his presidency, largely based on their willingness to give the uniquely bipartisan aspects of his agenda a chance.

Going forward, promoting this cooperative agenda must define his strategy if he will succeed.

After all, in his address to Congress, Trump recommended we must “work past the differences of party” in order to fix the problems facing our country today.

If the American people are to have great schools, safe neighborhoods, good jobs, and see a reduction in poverty, as Trump has promised, then the president must act on a legislative agenda that is built on bipartisanship, but also predicated on a willingness to compromise in order to make new reforms happen.