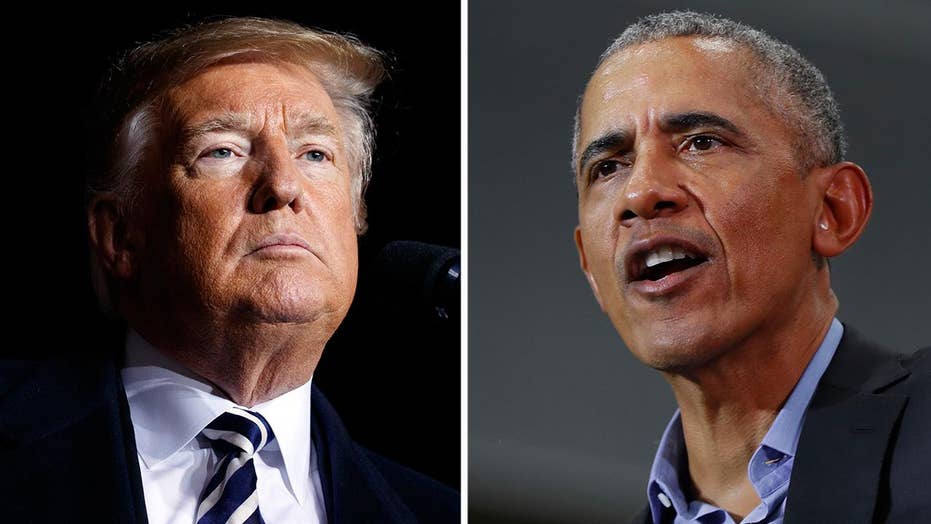 Former President Obama and President Trump will rally voters in the Sunshine State, which has a history of razor-close elections; Phil Keating reports from Miami.

Former President Obama, in a last-minute stump speech for Democratic candidates in Florida before Tuesday’s midterm elections, joined the liberal media chorus in casting President Trump and his supporters as angry and divisive. Obama and his liberal brethren, of course, are blissfully above that.

“In the closing weeks of this election we have seen repeated attempts to divide us with rhetoric designed to make us angry and make us fearful,” Obama said. “It’s designed to exploit our history of racial and ethnic and religious division that pits us against one another and makes us believe that order will somehow be restored if it just weren’t for those folks who don’t look like we look or don’t love like we love or pray like we do. … But in four days, Florida, you can reject that kind of politics … you can choose a bigger, more prosperous, more generous vision of America, an America where love and hope conquer hate.”

Is President Trump really that divisive? Or are his liberal antagonists who are pushing that narrative incapable of perceiving a conservative message as anything other than divisive?

The liberal media paint Trump as the most divisive president in history in their comprehensive daily smears of every action he takes and every statement he makes. It makes no difference that he’s often just responding to their daily invective because, by definition, they can’t be divisive. They’re just presenting the facts – or so they tell us.

They point to President Trump’s tweets and his condemnation of “fake news” – but what really agitates the liberal media is that this president has the audacity to hit back, even though they’ve drawn first blood. They’re not used to being served their own medicine.

To liberals, divisiveness means a refusal to acquiesce to their leftist policy demands. They never consider their own dogmatic, uncompromising agenda to be divisive.

President Obama talks a good game now, but don’t forget that in office he regarded his own ideas as sacrosanct and was incredulous that anyone could possibly oppose him in good faith. He considered his policies to be self-evidently superior, so told us that Republicans opposed him solely out of crass partisanship.

And when Republicans objected, Obama arrogantly reminded them that he won the election and didn’t want them to do a lot of talking. Yet the media covered for Obama.

In contrast, the liberal media often intentionally distort the facts to damage Trump politically. But in some cases they seem to really believe their own narrow-minded propaganda. To me, this is more alarming than when they are being deliberately biased and falsely denying it.

From their hermetically sealed echo chamber where uniformity of ideas is nearly absolute, the liberal media don’t regard their opinions as political. In fact, they’re not really even opinions. They’re objective, undeniable observations.

According to the liberal media, those who disagree with the wise men and women who bring us the news don’t have a legitimately differing opinion; they are just wrong and immoral. There is the reasonable (liberal) view and there is the aberrant view. Those are the only two choices.

Rational people understand, the leftist media tell us, that liberal taxing, spending and redistribution are reality-based. So too are expansive government dependency programs, expansive abortion “rights,” and a slavish devotion to “climate change” policies. Those who oppose these views? They are fact-challenged, we are told.

Liberal conceit has been around for ages, which explains the liberal media’s shock that anyone could accuse them of bias.

I remember years ago watching a panel with major TV network news hosts – such as Ted Koppel, Tom Brokaw and Dan Rather – discussing media bias. I was struck by their smug view that they were professional journalists who presented the news objectively and without bias. It didn’t even occur to them that their biases seeped into their selection and presentation of news stories. It doesn’t occur to their liberal media successors today.

I don’t deny that we’re going through a highly divisive period in our country, but it goes both ways. Of course we should all be civil, but in a nation as politically polarized as America, where opposing political parties no longer even share many of the same basic goals, isn’t it unrealistic to expect perfect harmony?

Bitter division isn’t new to the republic; it has been with us from the beginning. Indeed, the framers of our Constitution – knowing that human beings are not angels and that power corrupts – designed our constitutional system with checks and balances to pit competing interests against one another as part of their scheme to limit government and maximize liberty.

So could we please have a little less posturing and handwringing from the liberal media, which are even more to blame for the conflict than President Trump?

Hiding behind their self-declared status as “journalists,” those in the liberal media berate the president around the clock and demand that he passively submit, lest he criticize them back and threaten their First Amendment rights. What charlatans! President Trump has done nothing to suppress their liberties and they know it. They claim to be government watchdogs, but they are really just doctrinaire mad dogs.

Members of the liberal media pretend to be innocent victims, but they are reveling in the noise they’re generating. They insist on smearing President Trump as divisive even when he’s trying to be conciliatory, such as when they castigated him for visiting Pittsburgh to pay his respects to the synagogue shooting victims.

The liberal media's efforts to discredit Trump have backfired because they have lost their credibility. Let them continue and the backlash from Trump supporters will only multiply.