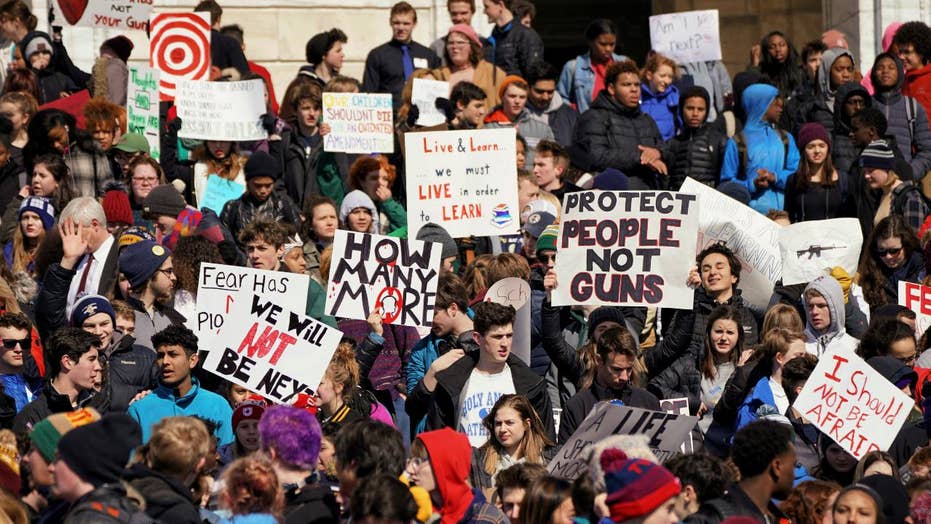 Can GOP and Democrats reach compromise on school safety?

Once again the country is dealing with the aftermath of another mass shooting and in the midst of a national debate about the best way to keep children safe at school. At the forefront of our national consciousness are mass shootings like the one last month at Marjory Stoneman Douglas High School in Parkland, Florida, that led survivors of the shooting to organize Saturday’s March for Our Lives, a nationwide protest.

In Parkland, a former student shot and killed 17 people on campus on Valentine’s Day. Since 1996 there have been eight mass shootings at schools, defined as incidents involving more than four deaths, excluding the assailant.

While the focus on mass shootings is warranted, it may eclipse the more common forms of violence students face. Every year about three out of four public schools report at least one incident of serious violence such as a fight or physical attack. One in five students is bullied, one in 12 has been in a physical fight and one in 20 has carried a weapon onto school property.

It’s obvious that when it comes to keeping kids safe at school, the country is failing. But how can the U.S. do better?

Congress is currently considering school safety legislation that would improve school security infrastructure and set up school threat assessment and crisis intervention teams, among other measures. It is part of a wide range of proposals being introduced or developed in local, state, and federal governments. Many proposals promote technology such as metal detectors and video cameras to try to enhance campus safety, but the experts and the evidence are mixed about how effective the devices are.

In our 2015 study for the nonprofit RAND Corporation, we investigated how technology can be used to make schools safer. We profiled communities like Londonderry, New Hampshire, which remodeled schools to attach vestibules to entrances to make it harder for visitors to gain entry. Clark County, Nevada, installed more than 12,000 video surveillance cameras in its nearly 360 schools. And in Florida’s Miami-Dade school district, security officers used wands to randomly conduct metal-detection screenings of students and their bookbags.

The experts were divided about metal detectors, X-ray machines and video surveillance technology, which some felt made schools seem unwelcoming. One said these types of technologies send a mixed message to students: “We want you to be a part of the community, but we don’t trust you.”

But the experts acknowledged some benefits of these security measures as well. Video surveillance can provide retroactive evidence for investigations when property crime or violence occurs. And metal detectors can help some educators, students and parents feel safer.

Some of the experts said the potential for serious harm to students and others on campus that can result from a mass shooting, regardless of how infrequent or remote a possibility, may justify any investment in technology. But none expressed strong confidence that any one school safety technology could prevent such tragedy.

Since our research was about the role of technology in keeping schools safe, we were surprised when both the evidence and experts stressed the importance of non-technological approaches. By and large, such approaches foster positive school climates: Students and staff have strong and trusting relationships with each other, students are engaged and enthused about learning, and a system is set up to attempt to handle disciplinary infractions justly and fairly.

What’s concerning is that there is emerging evidence that some technologies, such as metal detectors and video surveillance, may even detract from a school’s climate. But this is a difficult theory to test.

A study recently published in the American Journal of Criminal Justice found that visible security measures were associated with higher levels of student exposure to drugs and fighting. A 2010 review of studies found mixed evidence about metal detectors, with some surveys showing that students actually felt less safe when attending schools with metal detectors in place. Taken together, the two studies imply that visible security measures are not a panacea to ensure safety at school.

While the research is far from conclusive, it suggests that schools need to carefully invest in school safety technology. Moreover, if investments are made in technology alone without taking into consideration school climates—and how engaged and welcomed students feel in their classrooms—the answer to the question “Is the U.S. doing enough to keep its students safe?” is likely to be a resounding “no.”

Rajeev Ramchand is a senior behavioral scientist at the nonprofit, nonpartisan RAND Corporation.