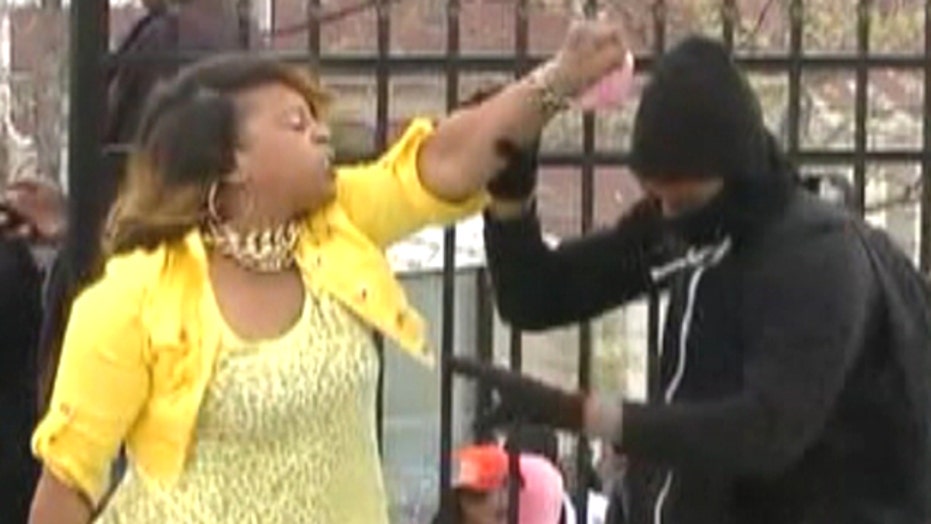 San Diego – In the contest for Mother of the Year, we have a winner. A woman caught on video, who has been identified as a mother disciplining her son, is the hero of the Baltimore riots.

There is not much positive news coming out of the recent unrest in that U.S. city, where — in multiple days of rioting — protesters smashed windows, looted stores, set fires, destroyed property, and attacked police officers with rocks and bricks. What started as public anger over the death of 25-year-old Freddie Gray, whose spinal cord was nearly severed while in the custody of the Baltimore Police Department, has morphed into a free-for-all where roving gangs seem intent on creating chaos and taking control of parts of the city.

Yet, amid all the violence and mayhem, there was one thing to feel good about: Hero Mom. Toya Graham has become an instant celebrity. She has even been held up as a model by Baltimore Police Commissioner Anthony Watts, who said he wished more of the city’s residents took their responsibility to control their children as seriously as this woman does.

So what did Graham do that has everyone buzzing? What could be that extraordinary? It’s called parenting, folks. Good ol’ fashioned, no-nonsense, no-excuses parenting. This is what it looks like. The sad part is that we see so little of it these days that we no longer recognize it.

According to news reports, Graham was home watching television coverage of the riot Monday night when she saw a young man in a black hoodie, throwing rocks at police officers. And although his face was covered, she recognized him. It was her 16 year-old son. She ran out the door and into the street, and she found the young man. And that’s where his troubles began.

The video shows Graham furiously grabbing her son’s sweater, yelling at him, and shoving him away from the crowd. It also shows her slapping him in the head and ripping off his hoodie and mask, as if to say: “I’m your mother! You’re not going to hide from me!” The same young man who — just a few minutes earlier — hadn’t been afraid to hurl rocks at police was frantically trying to get away from his mother.

Scenes like these warm my heart. I’d like to see more of them. Where were the parents or guardians for the rest of these kids? They need to step up, too. No more tolerating lawlessness, or making excuses, or blaming misbehavior on societal ills. Normally, this young man might be arrested, put in a cell, and hauled into court. In this case, Hero Mom was the police, prosecutor, judge, jury and executioner — all rolled into one.

I have a message for Graham: “Good for you, ma’am. You’re obviously a good mother, and you did the right thing. Because of how these things can escalate, you might even have saved your son’s life. You also did a public service by reminding other parents that they have a duty to control their children. Parenting is our most important job. Thank you for doing it well.”

When people catch a whiff of anarchy, and think they can misbehave without consequences, all is lost.

But consequences take different forms.And sometimes, it’s not the authorities that a young person needs to worry about. Sometimes the most effective arbiter of justice is, shall we say, closer to home.

What we typically hear from politicians is that parents have no power to control their children. The popular narrative is that of helplessness, of the poor child who either grows up without parents or has parents who aren’t up to task because they’re overwhelmed by their own problems.

In a joint press conference Tuesday with Japanese Prime Minister Shinzo Abe, President Obama made that mistake. He talked about “parents (who) — often because of substance-abuse problems or incarceration or lack of education themselves -- can't do right by their kids.”

Mr. President, you don’t get it. That kind of thinking is part of the problem. If you want to help people, empower them. You can’t do that when all you do is emphasize how little power they have. Obviously, Graham had the power to strike fear into her son’s heart and she used it.
Now, when their own child misbehaves, other parents need to do the same thing.

Ruben Navarrette is a columnist for the Daily Beast. He also writes a nationally syndicated column for the Washington Post Writers Group. He is author of "A Darker Shade of Crimson: Odyssey of a Harvard Chicano" (Bantam 1994).