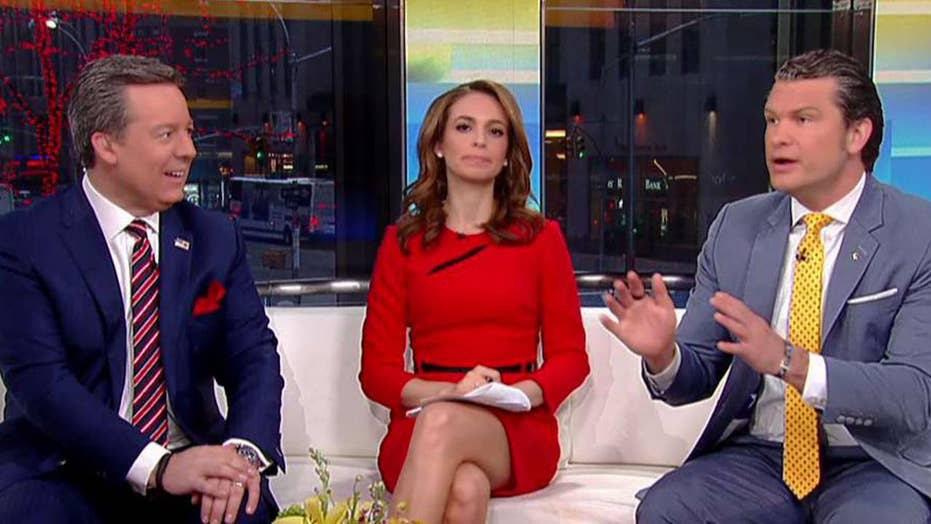 The student newspaper recently published a disturbing column that called for the targeting of white students – and specifically white male students.

TODD STARNES: I HAD A FRONT-ROW SEAT AT TRUMP'S STATE OF THE UNION -- YOU WON'T BELIEVE WHAT I SAW

She called for her fellow students to keep copious notes about the behavior of campus white guys so that the evidence might be used against them in future government confirmation hearings.

“Everyone knows a white boy with shiny brown hair and a saccharine smile that conceals his great ambitions,” Davis-Marks added.

“When I’m watching the white boy, I’ll remember a racist remark that he said, an unintentional utterance that he made when he had one drink too many at a frat party during sophomore year,” she wrote.

It’s not just a Yale problem.

At Pennsylvania’s Dickinson College, students are debating whether or not white male students should even be allowed to talk. That was the focus of an op-ed titled, “Should White Boys Still Be Allowed to Talk?”

“I am so g****mned tired of listening to white boys,” wrote Leda Fisher. “I cannot describe to you how frustrating it is to be forced to listen to a white boy explain his take on the Black experience in the Obama-era.”

“American society tells men, but especially white men, that their opinions have merit and that their voice is valuable, but after four years of listening to white boys in college, I am not so convinced,” she wrote. “There is an endless line of white boys waiting to share their opinions on the state of feminism in America, whether the LGBTQ+ population finally has enough rights, the merits of capitalism, etc. The list of what white boys think they are qualified to talk about is endless.”

It would be simple to dismiss the bigoted columns as the misinformed rantings of youngsters. However, the idea that white students should be stripped of their Constitutional rights and targeted by baseless accusations should alarm every freedom-loving American.

So what’s behind this new brand of bold-faced bigotry? It’s something that leftists call white privilege. But it’s nothing more than old-fashioned identity politics. And it has infected many universities across the fruited plain. I write about this issue extensively in my new book, “Culture Jihad.”

Professors have poisoned the minds of a generation – convincing minorities to embrace victimhood, while brainwashing white young people into believing any success they achieve is due only to their skin color.

Sadly, the society dreamed of by the late Rev. Martin Luther King, Jr. has become a nightmare where academic radicals are judging everyone by the color of their skin instead of the content of their character.

Here are some other shocking examples of campus bigotry directed at white students:

“All I want for Christmas is white genocide,” the white professor wrote on Twitter.

Drexel condemned the tweet but took no further action. The professor resigned a year later citing death threats. The university called him an outstanding classroom teacher.

“All of them deserve miserable deaths while feminists laugh as they take their last gasps,” she wrote on Twitter. “BONUS: we castrate their corpses and feed them to swine? Yes.”

In January, a teaching assistant at the University of Georgia declared that “some white people may have to die” for black people to advance.

Irami Osei-Frimpong wrote that “we have made a national project out of coddling White people about Whiteness, and we are living the consequences.”

The teaching assistant, who still works for the University of Georgia, is no stranger to anti-white rhetoric.

He wrote in 2017 in Medium, “We had to kill some white people to get out of slavery. Maybe if we’d killed more during the 20th century we still wouldn’t talk about racialized voter disenfranchisement and housing, education, and employment discrimination.”

We should all be horrified that our tax dollars are funding the salaries of bigots and racists who have weaponized their classrooms. There should be no place in higher education academic-sanctioned hate lessons.

And any university that continues to advance the white privilege theory should be stripped of its taxpayer-funded support. I don’t want a single penny of my tax money funding identity politics.