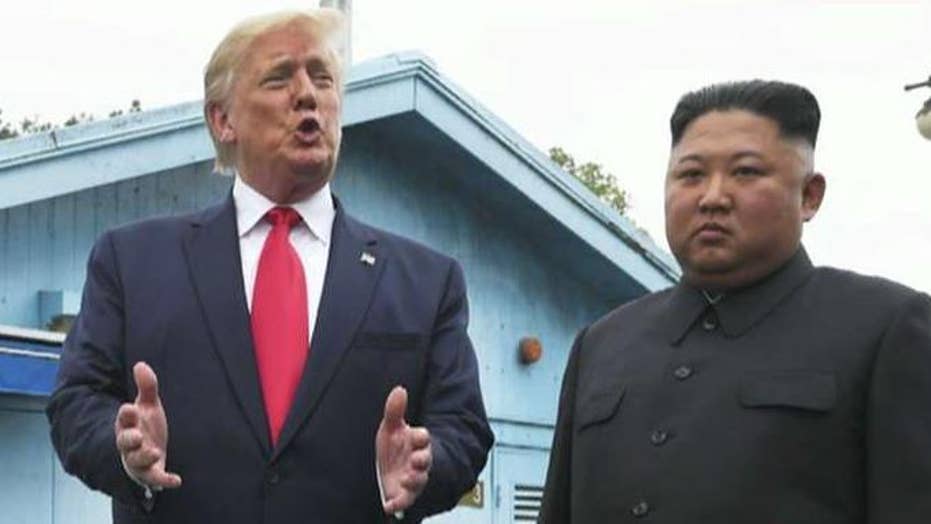 Gordon Chang breaks down the significance of South Korean President Moon Jae-in and President Trump walking the DMZ together. He also weighs in on Trump's historic visit to North Korea.

In Washington, D.C.-area Asia circles last week, the rumor mill was buzzing with the news of a possible media event at the Demilitarized Zone that separates the two Koreas during President Trump’s visit to South Korea. The other part of that rumor, that Trump would have a third summit, or at least a short meeting, with North Korean Chairman Kim Jong Un, was also floated—but no White House or Blue House officials would commit to anything (well, at least not to me).

But something told me I was not to be disappointed. I held out hope for one reason: Donald Trump’s strategy for dealing with North Korea always involved taking the old rulebook on dealing with the Kim regime and lighting it on fire. What violates such diplomatic decorum more than a meeting planned with little notice and almost no time to prepare? Such a gathering, however, oozes with the potential to get Washington and Pyongyang back on track towards a new type of relations free of nuclear threats. It also hints to the possible elimination of Kim’s nuclear weapons altogether. In other words, it was just too good to pass up for both sides, as I saw it.

With no risk, and lots of possible rewards, why not give it a shot? Trump’s greatest advantage in dealing with Pyongyang is that he simply does not care about the so-called proper way of conducting diplomacy. His mission, as it has always been, is to keep the American people safe, secure and prosperous. A meeting along the DMZ, even if it was quick and more of a gut check to see where Chairman Kim stood on the all-important question of denuclearization, clearly attempts to advance such an agenda. Trump took a chance for peace, with little downside to trying.

In my humble opinion, the president has done more good on the Korean issue in the last year and a half than President Obama did in eight.

Ever the showman, the president did not disappoint. In a historic gathering where Trump became the first sitting U.S. president to step into North Korea, he met with Chairman Kim jointly with South Korean President Moon Jae-in while also having a separate meeting with Kim. While no major deal was announced, just the sheer act of Trump crossing into North Korea territory is progress itself, a sign that trust is building and that both sides can work towards a brighter future. Remember, history is all about mind-blowing optics that change hearts and minds. Most people can’t recite the details of a certain treaty or document that made history, but they always remember the photo that did. Trump delivered that Sunday.

To be honest, this is a day I never thought I would see in my lifetime. During the dark days of 2017, I thought the chances were high that a nuclear war between America and North Korea could break out at any moment. While no handshake can take the place of full-blown nuclear disarmament, meetings such as these can set the tone where more summits and working level gatherings can take place for both sides to make big gains. We must start somewhere, and the past two summits and now Sunday’s gathering all build trust toward the harder work and agreements that are yet to come.

But, just as in all things that involve President Trump, those who can’t stand his clearly unconventional and unorthodox style as commander-in-chief were quick to lash out. Word from the pundit class—or the so-called foreign policy “experts” in both parties who cheered on the Iraq War, the disaster in Libya or countless other international debacles that cost our nation trillions of dollars and too many American lives—called Trump a fool for doing this.

That’s just flat wrong. While I have always believed progressives take their attacks on Trump too far, I can’t say I agree with everything the president does, either. For one, I am not a fan of Trump’s shoot-from-the-cellphone tweetstorms, going on a rampage on whatever issue has upset him at the time. I do get frustrated when he gets the facts wrong on some of the most basic issues. But on this issue, the idea that he is pulling out all the stops to try and get North Korea to give up its nuclear weapons and perhaps someday join the brotherhood of nations, is not only smart statecraft, it’s also good common sense.

Sorry, I won’t let the good outweigh what is merely annoying. In my humble opinion, the president has done more good on the Korean issue in the last year and a half than President Obama did in eight. North Korea is no longer testing nuclear weapons or long-range missiles, and Trump is now apparently pen pals with Kim. Is it all rather strange? Yep. But is it better than a war that would kill millions of people? For sure. And while we have a long way to go before we can declare North Korea is no longer a threat to America, I for one love what the president is doing. And so should the American people.

And heck, if President Obama received a Nobel Prize for nearly nothing, then I think there is only one obvious thing to do, and that’s to make sure Donald Trump receives the award as well.