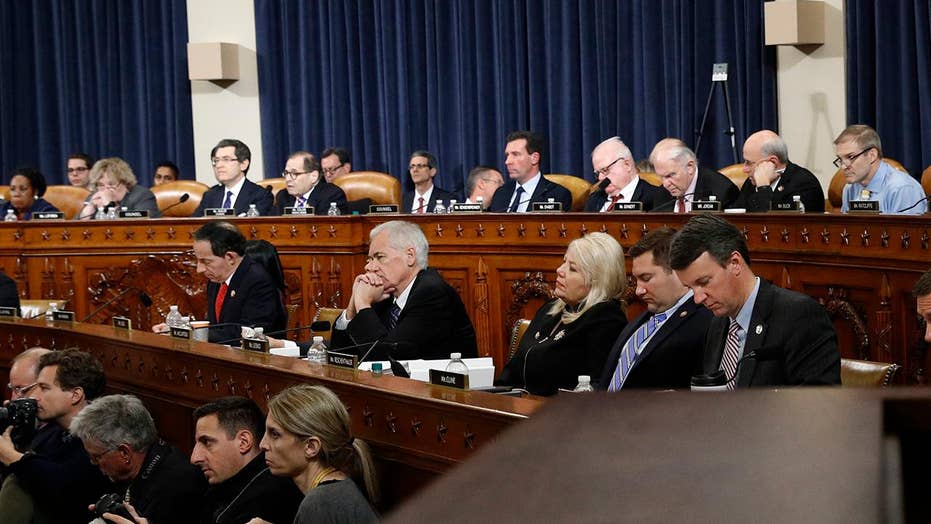 The report should be called “The Biden Protection Plan” or “Whitewash the Bidens.”

Schiff, D-Calif., and his fellow Democrats on the Intelligence Committee voted to approve the report Tuesday night, while every Republican on the committee opposed it.

Worse, the report bears all the fingerprints of a manufactured pseudo-scandal, orchestrated by Schiff. Evidence suggests he had a hand in the whistleblower complaint to set off these impeachment hearings against Trump.

The Democrats’ central charge is that Trump held back military aid to Ukraine to squeeze Ukrainian officials into digging up dirt on Biden and his son Hunter. Joe Biden is currently a leading candidate for the Democratic presidential nomination to run against Trump next year.

On a July 25 call between Trump and Ukrainian president Volodymyr Zelensky, Trump asked Zelensky to investigate two issues: Ukrainian meddling in the 2016 U.S. presidential election, and Biden’s role as vice president in 2016 in getting a Ukrainian prosecutor fired.

At the time Hunter Biden had a board position paying him up to $80,000 a month with a Ukrainian natural gas company that might have been under investigation.

Most of Schiff’s 17 witnesses were not on the Trump-Zelensky call, and hundreds of pages of testimony are devoted not to military aid but to discrediting and burying any notions that Joe Biden and his son acted wrongly in Ukraine. The report should be called “The Biden Protection Plan” or “Whitewash the Bidens.”

“Multiple witnesses,” the report says, “testify that they were not aware of any credible evidence to support claims that former Vice President Biden acted inappropriately when he advocated for the removal” of a Ukrainian prosecutor (p. 103).

Every few pages, the report insists emphatically that claims of wrongdoing by the Bidens “have been discredited,” “lacked any basis in fact,” or “are without merit” (pp. 42, 98).

In truth, there are questions to ask about Joe Biden’s boast in January 2018 that he had gotten a Ukrainian prosecutor fired by threatening to withhold U.S. aid (pp. 55-56). That’s the same kind of threat Trump is accused of making, only Biden is on tape actually saying it.

Another question: How did a sitting vice president with responsibility for Ukraine allow his son to take a lucrative board position at a Ukrainian company known for corruption? You won’t find answers in Schiff’s report.

But to write the report, Schiff needed to investigate something. The July 25 call between Trump and Zelensky fit the bill – enabling Schiff to orchestrate a phony scandal. There would be no national impeachment debate if there hadn’t been a whistleblower willing to file a complaint about the call.

Schiff’s report pretends that he first heard about the whistleblower on Sept. 9, when the complaint became public (p. 143). Don’t believe it.

In truth, Schiff’s committee appears to have worked hand-in-glove with the whistleblower from Day One. The whistleblower kept that a secret. Worse, Schiff denied any knowledge of the whistleblower, until being caught in that lie, according to the Washington Post and Factcheck.org.

Even now, Schiff refuses to surrender documents disclosing his whistleblower connections, and says he sees no reason to testify in the Senate if called.

The worst part of Schiff’s report is the dishonest twisting of testimony. Most of Schiff’s witnesses – like acting Ambassador to Ukraine William Taylor and Deputy Secretary of State George Kent – are disgruntled career diplomats angry they’ve been sidelined or ignored by Trump.

Taylor, for example, testified he’d come to an “understanding” there was a quid pro quo. “Understanding” is a weasel word. Taylor admitted his “understanding” came third-hand, and he passed it on to Kent, making it fourth-hand. Neither of them heard it from Trump nor ever spoke with Trump about it.

Yet Ambassador to the European Union Gordon Sondland did talk directly to Trump, and afterward assured Taylor and others that “the President has been crystal clear: no quid pro quo’s of any kind.” Schiff dismisses this powerful evidence as “a false exculpatory.” (Report, p. 24, 134)

Sen. Ron Johnson, R-Wis., also bluntly asked Trump on Aug. 31 if there was a quid quo pro for aid to Ukraine, and Trump vehemently replied: “No, I would never do that.”

Schiff dismisses that first-hand evidence, insisting it couldn’t be true because Trump continued to withhold aid. The California congressman’s report omits Trump's reason. Trump told Johnson that the hold was to pressure Europe to pay its fair share of aid to Ukraine, "Otherwise, Ron, we're schmucks."

Schiff’s report props up rumors and denies the truth – including the sleazy facts about the Bidens.