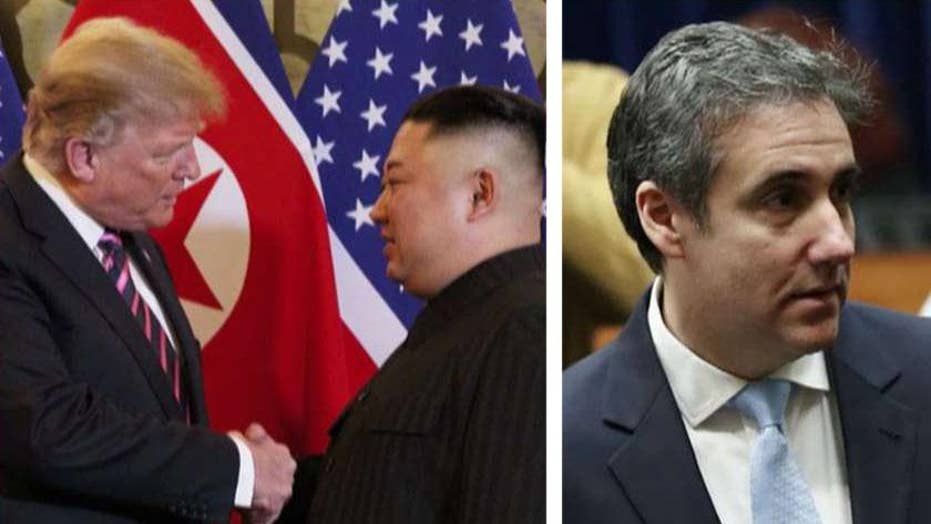 Gutfeld on media coverage of Hanoi and Cohen

So what does the media do when faced with a potentially positive, dramatic achievement involving Donald Trump?

Find a smaller and more embarrassing story, and play it up big. Call it the split screen effect!

The smaller story is a House committee hearing featuring a day of testimony by President Trump’s former lawyer, Michael Cohen.

As both stories competed for coverage, Hallie Jackson said on MSNBC that Trump was having “a split-screen kind of morning.”

Also on MSNBC, Richard Hass said: “What's so interesting about today is the juxtaposition, it’s literally and figuratively the split-screen.”

And on CNN, David Axelrod said: “You have to say this is a classic Trump-era split-screen story.”

Ah – the "split-screen" phenomenon. Overshadow what’s important to you with something important to the media.

That means the slow awkward diplomatic process in Hanoi – that’s meant to enhance the survival of our country – must now compete with a gossipy spectacle filled with old news.

Guess who wins? The spectacle.

That’s what the hearing was for. The media knows every time Trump goes overseas he wins. So maybe they can distract you with this gratuitous drama. And if there's good news from Hanoi, it’s just to obscure the hearings!

On CNN, Don Lemon said of the president: “He may try to distract and he may make a bad decision with Kim Jong Un.”

And Hass said on MSNBC that the president may try to “overreach” in his negotiations with Kim and “hope he can pull something off in Hanoi that will obscure the other story.”

CNN's David Axelrod asked: "Does the president feel the need to come up with something spectacular out of this meeting, something that he can tout as a historical agreement in order to overshadow” the hearing where Cohen testified?

Sorry, isn’t it more likely the reverse? The hearings are meant to undermine the summit. Look at our coverage. Even we took all of it.

Anyway, I’ve never seen so many people rooting for failure. And Tom Brady wasn't even playing. But it might backfire.

By placing these two stories side by side it may create the reverse of what the press wants. What’s meant to undermine that damn Trump actually damns them.

I mean, they're comparing a dramatic diplomatic effort that might end a 70-year-war with a partisan tantrum. Or let’s put the contrast this way: We could put an end to those false missile alerts that struck horror in Hawaii. But let’s focus on slimeball theater that’s protein powder for the consensus press.

It’s like comparing a cure for disease with an old “Jackass” rerun. Something historical with something hysterical. Never has something so big been compared to something so small.

Well, maybe not. But it's sure close.