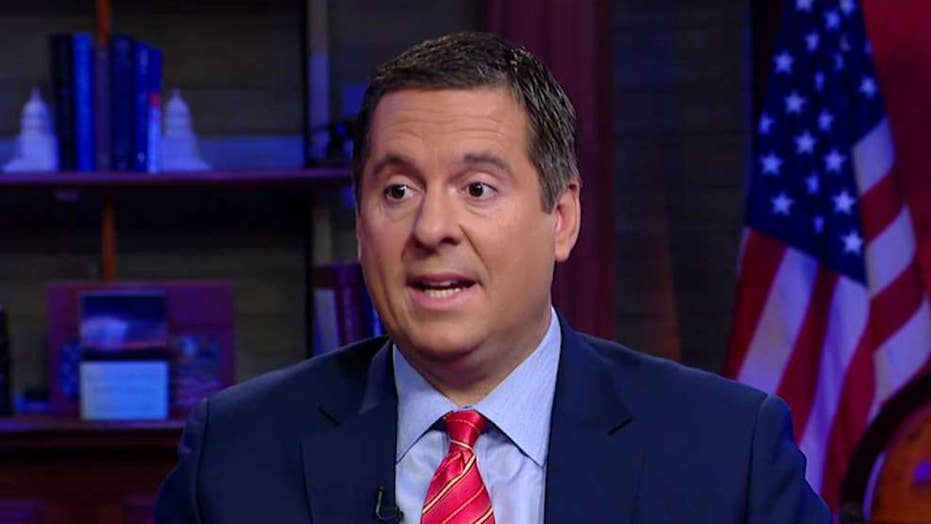 Rep. Devin Nunes: 'Tough luck' if impeachment witnesses were upset that Trump was going around them in Ukraine

Like the title of Herman Wouk’s 1965 comedic farce, “Don’t Stop the Carnival,” President Trump may hope that the impeachment idiocy continues in perpetuity. Or at least until we are well into the presidential election season next year. It will all but guarantee his continued residence at 1600 Pennsylvania Avenue.

Schiff, who serves as chairman of the House Intelligence Committee and Grand Poobah of the impeachment circus, is strikingly reminiscent of Wouk’s fictional main character, Norman Paperman. His hapless antics are the stuff of slapstick and buffoonery. If it can go wrong, it will. No one seems to take poor Norman seriously. Except Norman.

BRADLEY BLAKEMAN: DEMS' IMPEACHMENT OPTION — THIS IS THEIR ONLY EXIT STRATEGY

And so it is with Schiff. He is obsessed, strident, self-righteous, and so blindingly dissolute that he cannot seem to recognize the slow-motion collapse of his dream to remove Trump from office. If Americans are paying attention to his hearings, it is for the same reason we tend to watch video of buildings imploding. Or train wrecks. There is something inexplicably compelling about disasters in the making.

There is exactly zero chance that the president will be evicted by the Senate from the Oval Office. Yet, there is near certainty that House Speaker Nancy Pelosi and her carnival barker, Schiff, will marshal together their partisan forces to impeach Trump. After all, impeachment was preconceived and preordained the moment Trump was elected. All that was required was some pretext. Any excuse, however spurious, would do.

For the longest time, Democrats and the complicit Trump-hating media were convinced that Special Counsel Robert Mueller would deliver them from their imagined evil. They waited eagerly for 22 months, all the while convicting the president in the court of public opinion with phony accusations and unverified stories on an almost daily basis.

Never mind that there was never any credible evidence of a criminal “collusion” conspiracy hatched by Trump and Russian President Vladimir Putin in the bowels of the Kremlin. The Russia “witch hunt” persisted untethered to reality until the very moment Mueller’s report confirmed that it was all a hoax. Democrats and the media were apoplectic with grief and disbelief. They still are.

Since then, the seek-and-destroy Trump cabal has worked sedulously to invent some other ruse or artifice to rid themselves of their political nemesis. The Ukraine “witch hunt” is the inevitable sequel, only twice as preposterous. The allegedly incriminating evidence is no evidence at all.

Last week, the chattering class of diplomats took center stage in the carnival. Like a vacuous “coffee klatch” at Starbuck’s, they dispensed all manner of rumor and innuendo based on triple and quadruple hearsay – a guy told a guy who confided in me that the original guy “presumed” there was a "quid pro quo." That was Wednesday.

By Friday, the mind-numbing absurdity evolved into even more rank speculation as another diplomat, who admitted that she had no first-hand knowledge of the central issue, told her “boo-hoo” story of being fired as ambassador to Ukraine. If she had a serious complaint, she should have taken it to human resources, not a congressional impeachment inquisition. She readily confessed she knew nothing about bribery or “any criminal activity.”

Ranking Republican Devin Nunes, R-Calif., stated the obvious when he observed, “I’m not exactly sure what the ambassador is doing here today.” Good point.

It turns out that Marie Yovanovitch was sent back to Washington a full two months before Trump’s telephone conversation with Ukrainian President Volodymyr Zelensky that is at the center of the supposed “quid pro quo.” But that did not stop legal counsel for the Democrats from superimposing on the giant video screen the transcript of the call and asking Yovanovitch to offer her interpretation of its contents and what the president intended.

Yovanovitch is typical of the self-important people who inhabit our nation’s foreign service. For example, she testified, “The U.S. relationship with Ukraine is the single most important relationship.”

Seriously? These diplomats have convinced themselves that the universe revolves around them. They delude themselves into believing that they are the ones who dictate foreign policy, not the president.

If Trump dares to do something they don’t like, they seek to undermine him. They are the malignant force that inhabits our government.

This week there are eight more purported “witnesses” who will be riding the Schiff carnival carousel. They, too, will be spinning opinion and conjecture built on multiple hearsay. As witnesses, they are largely superfluous.

The Trump-Zelensky conversation needs no interpretation. With a transcript available for all to read, it speaks for itself. Nowhere is there a demand, threat, condition, or pressure of a “quid pro quo” linking U.S. military aid to an investigation of Joe Biden and his son. This was corroborated by statements issued from Zelensky.

One diplomat, Bill Taylor, did manage to offer something relevant and material when he told the committee that he had three meetings with the Ukrainian president following the phone call and the subject of a “quid pro quo” never came up. This constitutes strong evidence that it never existed to begin with.

Last week, Pelosi challenged Trump to testify at the carnival. Perhaps she thought it might make for a good sound bite.

On Monday, Trump tweeted a reply to “Nervous Nancy” that he might take her up on the offer to testify “about the phony Impeachment Witch Hunt.”

The media kicked into immediate overdrive and commenced salivating over the prospect. They fell for the trap. Or joke.

Trump has no intention of lending dignity to an undignified process. He was merely teasing or tweaking Pelosi, as he is wont to do.

But you can probably expect another tweet to follow in which the president will offer to testify if Schiff transforms his inquisition into a forum that respects both fundamental fairness and due process by allowing Republicans to call their own witnesses and permit full cross-examination of Democrat witnesses without being gaveled down.

Trump knows such an offer will be rejected promptly by Schiff. It would ruin the carnival. Republicans would call the faux “whistleblower” to testify, as well as Schiff himself. Their suspected “collusion” in composing the whistleblower complaint (which doesn’t actually qualify as a legitimate complaint under the law) might well implicate Schiff as the driving force who engineered the whole Ukraine hoax as a pretext to impeach Trump. The chairman would never risk being exposed with the truth.

You see, Schiff is a desperate man. It is a measure of his desperation that he read to Yovanovitch a tweet by Trump publicly criticizing her and then all but asked her if she felt intimidated. The answer was predictable.

Schiff then implied the tweet might be grounds for an article of impeachment for “witness intimidation.” Forget the fact that Schiff created the whole incident by informing the witness of the tweet, it still does not meet the “witness intimidation” requirements of a physical threat to a witness, bribing a witness, or coercing a witness to lie. But neither facts nor the law has ever prevented Schiff from inventing a good story.

As Brad Blakeman observed in a recent Fox News Opinion column, “Democrats are already looking for a way out of the impeachment” charade. Rep. Jeff Van Drew, D-N.Y., one of only two Democrats to vote against the current inquiry, lamented that “It is supposed to be bipartisan … it is supposed to be fair.” He and other members of his party know that Schiff’s machinations have demeaned the process.

However, it may be too late to reverse course and pump the breaks on the impeachment merry-go-round. Majority Leader Mitch McConnell, R-Ky., has told reporters that the Senate will never convict Trump on such flimsy non-evidence, but that a full-blown trial seems inexorable if the House votes to impeach.

Americans have a keen sense of fairness. Increasingly, they are coming to realize that Schiff’s clown show is the antithesis of an unbiased, equitable, and impartial proceeding. The longer it endures the more likely Democrats will suffer a severe political backlash that will, in the end, benefit the incumbent president.

For this reason, Trump may hope that the carnival never stops.