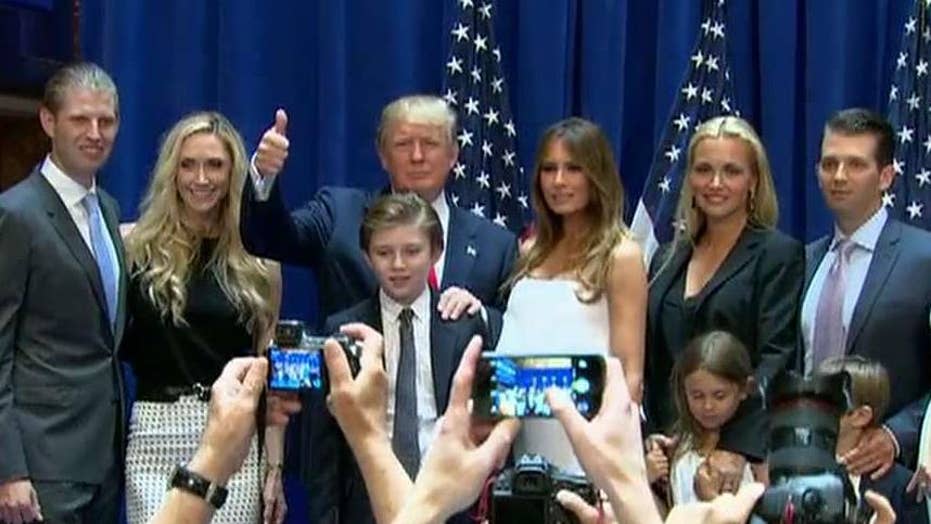 Trump vows to let his kids take over family businesses

Trump plans to leave the family's business endeavors by mid-December

In the 19th century, “parlour games” (yes, that’s how it was spelled) were a popular way for gentlemen and ladies of leisure to amuse themselves. The games often involved suspense, intrigue and a healthy dose of conjecture.

And so it remains today among the Washington elite as they speculate on what President-elect Donald Trump will do on December 15 when he reveals how he intends to avoid conflicts of interest by “leaving my great business.”

AT CARRIER, TRUMP PROVES AMERICA FIRST IS AN ATTITUDE, NOT A SLOGAN

What exactly does he mean by the word “leaving”?   Sell his assets?  Sell his ownership interest?  Transfer control to his children?  Convey his corporation to a trust, blind or otherwise? How does he avoid running afoul of the Emoluments Clause in the Constitution?

Whatever he decides, you can expect a new parlour game to emerge.  One which poses the question, how long will it take Democrats to level accusations of wrongdoing?

Not long.  And that may be their mistake.  Americans knew Donald Trump is a billionaire with vast holdings.  They knew his presidency could pose conflicts of interest.  But they elected him anyway.

It appears they cared more about instituting his policies than whether his businesses might also reap financial benefits.

The Ethics In Government Act of 1978 (18 USC 201, et al.) states that executive branch employees cannot participate in government matters in which they have a financial interest.  However, the statute specifically exempts both the president and the vice president.  So, Trump is correct in observing that the law does not apply to him.

Nevertheless, he understands that an appearance of conflict would precipitate a myriad of accusations that might inhibit his ability to govern.  Thus, his preemptive act to put distance between himself and his businesses.  It is a wise move, in theory at least.

But if Trump doesn’t separate himself sufficiently, he will find himself the target of endless criticism that he has conjured nothing more than a series of “charades”.  Which, of course, was another favorite parlour game in the Victorian era.

Trump’s umbrella company is called the Trump Organization.  It is a privately held corporation with an empire of 515 subsidiaries in the United States and globally. Ventures include real estate, construction, entertainment, publishing, media, financial services and a panoply of retail products and services. Get the picture?  It’s “yuge”.

It is a fair bet that many of the company’s contracts, leases and licensing agreements are long term and some of them may specifically prohibit liquidation or sale until the expiration of the contracts. Even if they don’t, winding down so many business relationships might take more years than the president’s four year term. Penalties and lawsuits might ensue.

Hence, selling the hundreds of assets in the Trump Organization is impractical.

Instead of selling the individual assets, Trump could sell his ownership interest in the Trump Organization to his children.  Whether this is even possible depends on what is provided for in the company’s Articles of Incorporation.  There may be restrictions on who can buy or sell shares, or how many shares can be transferred.

Let’s assume Trump can sell or transfer his shares to family members.  The price cannot be determined by the stock market because the Trump Organization is not a publicly traded company.  Absent a “buy-sell” provision in the corporate documents, an individual valuation of more than 500 entities would be a herculean undertaking.

Also, how would his children finance the purchase? Would part of it be a gift?  And then there are the capital gains tax, gift tax and estate tax burdens which need to be considered.

So, while selling his entire stake in his own company is not impossible, it is not the most feasible solution.  Moreover, if he were to sell his assets to his children he would still be susceptible to allegations that his decisions as president favor the financial interests of his family.  Not an ideal solution.

Transfer Control to His Children – Doable

In announcing Wednesday that he was “leaving” his business, Trump tweeted, “Legal documents are being crafted which take me completely out of business operations.” This statement is revealing on two levels. First, he did not say anything about sale or divestiture of ownership. Second, in his reference to relinquishing any role in the business operations, Trump seemed to be implying that he would end his management control only. This would likely be accompanied by a termination of compensation.

Yes, Trump would still be an owner and maintain a vested interest, but he would divorce himself from day-to-day decisions and executive control.  At the same time, he could execute documents pledging not to discuss company business with the new management or otherwise exert influence over operations.

Would this be enough to eliminate any appearance of a conflict of interest?  No, nothing short of liquidating all his assets will accomplish that.  But transferring control may satisfy the public by devising a “firewall” between Trump and his holdings.

Inevitably, his most ardent critics will argue that as long as Trump retains ownership he could make decisions as president which would enhance his known assets over which he will surely regain control at the end of his presidency.

Place His Ownership in a Trust – Sure

To place an extra layer of insulation on the above-referenced transfer of control, Trump could put his ownership interest in a trust to be operated by an independent trustee.  It is not necessary, but it looks good and it comports with some of the promises he made during the campaign.

At times, Trump said he would place his assets in a “blind” trust, although he may have used that term incorrectly.  In a truly “blind” trust, all the assets are sold and reinvested in new assets of which the beneficiary has no knowledge. Thus, the term “blind.”

Because selling all of Trump’s assets is impractical, a reasonable alternative would be the establishment of a regular (or “inter-vivos”) trust.  The assets would not be sold, but held separately.  Distributions over time could be reinvested by an independent trustee without Trump’s knowledge or interference.

The “Emoluments Clause” – Another Problem

Because the Framers feared corruption, they devised Article 1, Section 9 of the Constitution which prohibits federal employees from accepting any gifts or compensation (emolument) from a foreign state. This is a problem for Trump because he has numerous foreign businesses, some of which probably have direct foreign government involvement. He also does business with government-owned banks overseas. And, too, foreign diplomats stay at his hotels.

Interestingly, the Emoluments Clause has never been legally challenged.  Some legal scholars believe it does not apply to the president in the same way the federal law on conflicts of interest exempts the president.

The clause itself gives Trump an out. It says that Congress can give its consent.  Whether a Republican House and Senate would do so is not known. It is also unclear whether Trump could circumvent the clause by placing his assets in a trust, as long as he receives no direct compensation while he is president.

For more than 200 years and through 44 presidents, the United States has seen a wide variety of individuals occupy the nation’s highest office. There have been lawyers, military leaders, farmers, a tailor, cattle rancher, newspaper publisher, engineer, and even an actor.

But never before has a businessman with such immense wealth and hundreds of businesses been elected to the presidency. It poses a set of unique challenges which politicians and ethics lawyer will debate exhaustively.

The trick for Donald Trump is to formulate a way to step through a minefield of legal and ethical obstacles to mollify not just his political adversaries on Capitol Hill, but the American public which has entrusted in him the country’s greatest honor.

So, we await December 15th.  Until then, let the “parlour games” continue.